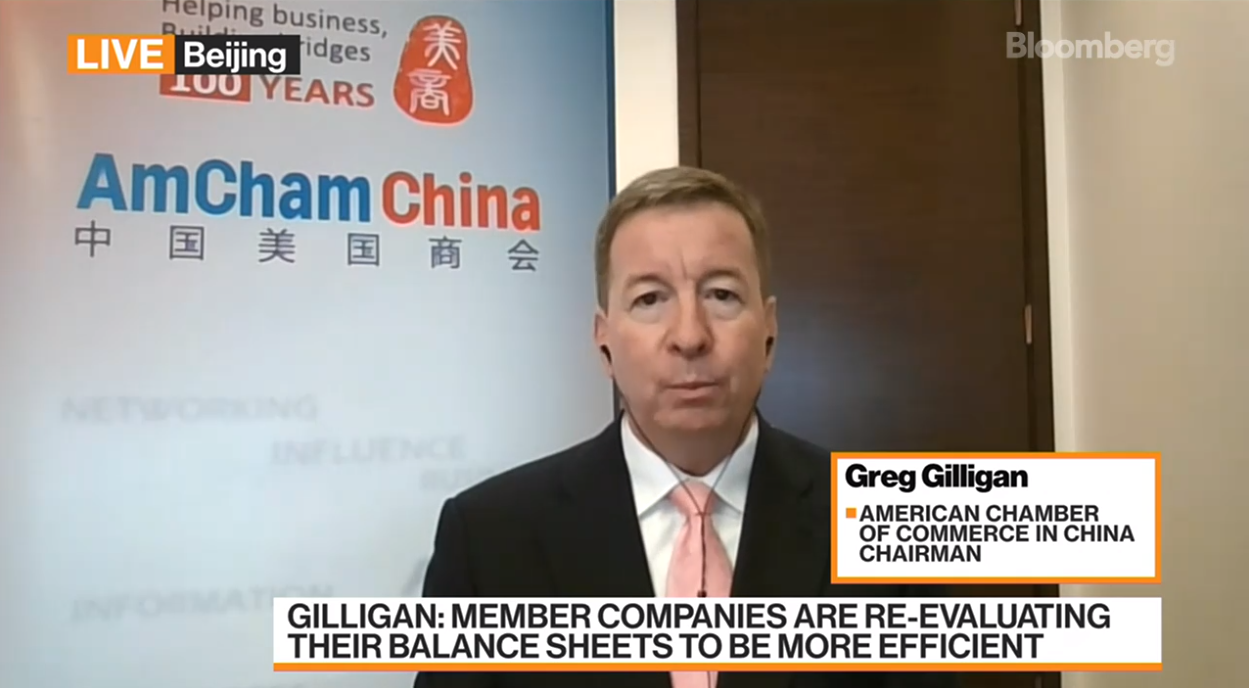 AmCham China Chairman Greg Gilligan appeared on Bloomberg TV this week in wide-ranging interview, where he discussed the current state of the Phase One trade deal, global travel disruption, and the wider impact of COVID-19 on member companies. In response to a question from anchor Tom Mackenzie about the mood on the ground in China among AmCham China members, given the current state of the US-China relationship, Gilligan replied:

“Naturally, our members are quite concerned about US-China relations and so what we’re trying to do is to remain the ballast in the relationship, where we try to keep commercial matters on track, such that the two countries can then hopefully build from there.”

Mackenzie then brought up recent reports saying that the Phase One trade deal is under threat, asking Gilligan whether it is still possible to achieve the deal. Here’s his reply:

“Yes, it is possible. I believe [the reports] are wrong. I’ve heard the same rumors about the deal coming apart, but we have interaction with both the US government and the Chinese government that tell us differently. At this very time three weeks ago, I sat at the Ministry of Finance with a senior official who’s a member of China’s negotiating team for the Phase One deal, and we were talking about how our member companies could be a part of implementation for Phase One. That process seemed quite sincere and it was also inconsistent with what we saw in some reports about the deal coming apart. We’ve also since then seen purchases on agricultural products and other things. That’s not to say that things can’t improve, and indeed, COVID-19 is terrible in every respect – including as to the Phase One trade deal. Things can improve. China can buy more agricultural products. Currently – or at least as of a couple of days ago – there were about 130 oil and gas tankers on the water heading to China. I think seven of them were [full of] American products. So we would like to see more, more agriculture purchases; China can buy more airplanes, and all those things that would really move the needle on the Phase One trade deal. But, in any event, I’m seeing sincerity in the process and both sides trying to get it done.”

The interview then moved onto the impact of COVID-19 on AmCham China member companies, with Gilligan asked about the key concerns for members, and the top things currently impeding operations.

“Overwhelmingly, our members are concerned about global travel disruptions. In our most recent survey, 90% of the members highlighted that as their number one concern, and that’s up from 77% from the April survey. We need American company executives back on the ground in China, so that they can move forward with investment decisions and current investment plans. Not only do the executives need to come back, but they want their spouses and children with them, and they want essential support workers like nurses, doctors, and educators, so that their kids can actually go to school. China is working with us and we’re in close contact with central and local governments on this. There is a fast track process that they’re trying to bring forward and we’re working with them very closely on that and relaying all that information to our membership. But, again, our folks need to get back on the ground so that they can drive the business.

Co-host David Ingles then asked Gilligan about improving business conditions, and which sectors had been more or less impacted. Gilligan responded as follows:

“We see different things across different sectors and so, for instance, technology is rather bullish and 30% of the respondents in the technology sector expect increases for 2020. However, if you look at the consumer sector, about 21% said that they’re expecting more than a 50% hit to revenue. Manufacturing is better. Demand side is still kind of weak, but if you look at manufacturing, just under half [of our membership] say that they’re at 100%, and back to full productivity. There’s a lot of cost cutting going on, so in each sector folks are being conservative, but you will also see that there’s continuity in investment plans, a fair amount of continuity even for 2020, and then significant continuity for the longer term, which is, say, three to five years.”