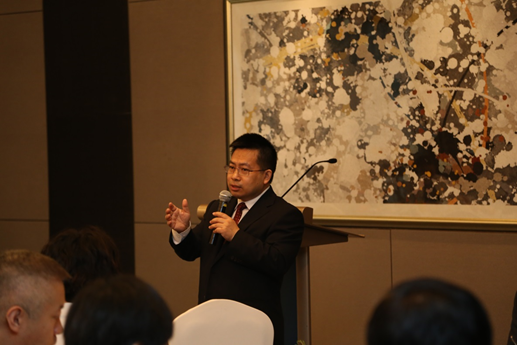 AmCham China's Chinese Government Affairs Committee (CGAC) highlighted the significant challenges and achievements that were addressed in Xi's September visit to the US during the first in a new breakfast series. Dr. Ruan Zongze, Executive Vice President and Senior Fellow at the China Institute of International Studies (CIIS), touched on the important topics of the official state visit, including cybersecurity, South China Sea, human rights, climate change and the Asian Infrastructure Investment Bank. Gloria Xu and Victor Zhang, incumbent and former chairs of CGAC, hosted the Chinese-language event with 30-plus attendees gathered at the Kerry Hotel on Sept. 28.

The buildup surrounding the trip, Xi's first formal visit to the US after taking office, began with an unprecedentedly early announcement in February. With more diversified voices and domestic debates, Ruan said, China has been improving its policy transparency gradually, but this also requires the US to seek a better way to communicate with varied Chinese stakeholders and understand China from different levels.

Ruan also said this visit revealed the evolvement of the driving force in Sino-US relations, which has transformed from the shared threat from the Soviet Union in the 1970s to the common domestic demands currently. However, mistrust is still the major bottleneck between China and the US, he remarked, and the dual character of coexisting cooperation and conflicts still lingers. Regarding China’s rapid development, he quoted American experts as saying, “The US actually worries more about China’s failure than its success.” In the future, both sides will increase cooperation on more regional and global issues.