How HR Can Lift Women Into Leadership 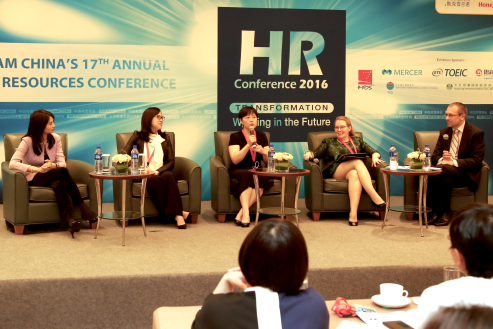 At AmCham China’s HR Conference on June 28, audience members at the Women in Leadership panel learned a startling statistic: women hold 51 percent of senior positions in China, the highest rate in the world, according to Forbes. And women are thriving in schools as well, graduating from post-graduate programs at higher rates than men according to the Ministry of Education.

Still, holding a senior position is not the same as being in the C-suite, and women have a long way to go both in China and around the world. “There are still more men named David as CEOs than there are women CEOs (in the US and the UK),” noted Sarah Kemp, Minister Counselor for Commercial Affairs at the US Embassy in Beijing, referring to a study of top executives in the US S&P 1500 and UK's FTSE 100. The same goes for the name John.

What is holding women back? In some cases, the answer is simple: themselves. Rafferty observed that many women fail to advance due to their own self-doubt, rather than a lack of opportunity. For example, a Harvard Business Review (HBR) study found that women feel they must have higher resume qualifications than men to apply for the same positions. Another HBR article observed women tend to apologize and allow themselves to be interrupted more frequently than their male counterparts, struggling to hold their own in meetings. “Being attuned to these issues is important,” said Kemp.

Rafferty said the problem may lie within, but so does the solution. In 2013, she co-founded Lean In Beijing, a platform for female professionals to network, share experiences and advise one another. The 100,000-strong organization is currently expanding its programs to meet the growing demand for mentorship and leadership development opportunities. Yu agreed that women need to be more confident in their abilities, adding, “We need to help ourselves.”

Of course, it’s not all about self-confidence. Women face other challenges, such as the perennial issue of work-life balance. The panelists initially agreed to keep the hackneyed topic of “work-life balance” off the table, viewing it as overemphasized amid so many other issues. Yet, it still managed to creep in. Women in China often care for aging parents in addition to children, which can make the balance even more difficult. “I don’t like the word burden,” Yu said. “But that’s the reality of today.” Caring for a child or parent can be a significant stressor, and some women worry about career setbacks if they take time off.

The panelists suggested a range of possibilities to address work-life balance. In particular, Kemp highlighted her policy of granting “family leave” (not the gendered “maternity leave”) for both parents. “[Child care] is a family issue, not a man versus woman issue,” she said. Family leave is not only important for reducing the burden on mothers, but also for building family unity and allowing men to bond with their children. In addition, when both genders take family leave, women are less likely to suffer professional setbacks for doing so.

Small changes that can make a big difference

Kemp stressed the need for managers to give feedback equally, regardless of gender. According to a 2014 article in HBR, managers are often reluctant to give direct, specific feedback to their female employees. This puts them at a disadvantage when it comes to developing their skills, as well as earning promotions.

Female leadership programs and small peer support groups can also be valuable tools. For example, Lean In Beijing operates “Lean In Circles” where small groups of women can meet regularly to advise each other. “Based on psychology research, this is a way that you can basically develop each other and build self-awareness,” said Rafferty. “It’s a powerful way to learn from each other and see your own blind spots.” This type of program doesn’t have to be exclusive to women. Rafferty added that the format is proven to be highly effective in mixed-gender settings, too.

Gao cited Lenovo’s Women in Lenovo Leadership (WILL) programs as particularly effective in helping women build confidence and understand development opportunities. Again, such programs don’t have to be women-only zones. “We actually invited male executive sponsors to be board members of WILL activities,” Gao said. Lenovo found that men are effective and invested coaches and mentors for future female leaders, and also found WILL leadership program participants advanced faster than their peers.

The panelists were less enthusiastic about using gender quotas to ensure a certain number of positions go to women. “Getting things started, they can be helpful. The challenge is you don’t want to be seen as unqualified and only there because of quotas,” Kemp noted. Gao added that when she was once offered a promotion, she asked her boss, “Am I promoted because I’m a woman? I don’t want positive discrimination.”

Gao recounted her attendance at a women’s forum several years ago, in which several speakers discussed how to learn from men to succeed in business. She said that the traits typically associated with leadership are also stereotypically masculine. But Gao asserted that women have their own strengths and leadership styles, which may even be a superior fit for the future of leadership. Tech companies, for example, tend to be less hierarchical and have more flexible, project-based cultures.

Addressing the audience directly, Gao had a few words of advice. “Don’t just try to change yourselves to be men. It won’t work,” she said. “Trust yourself, and play to your strengths.”