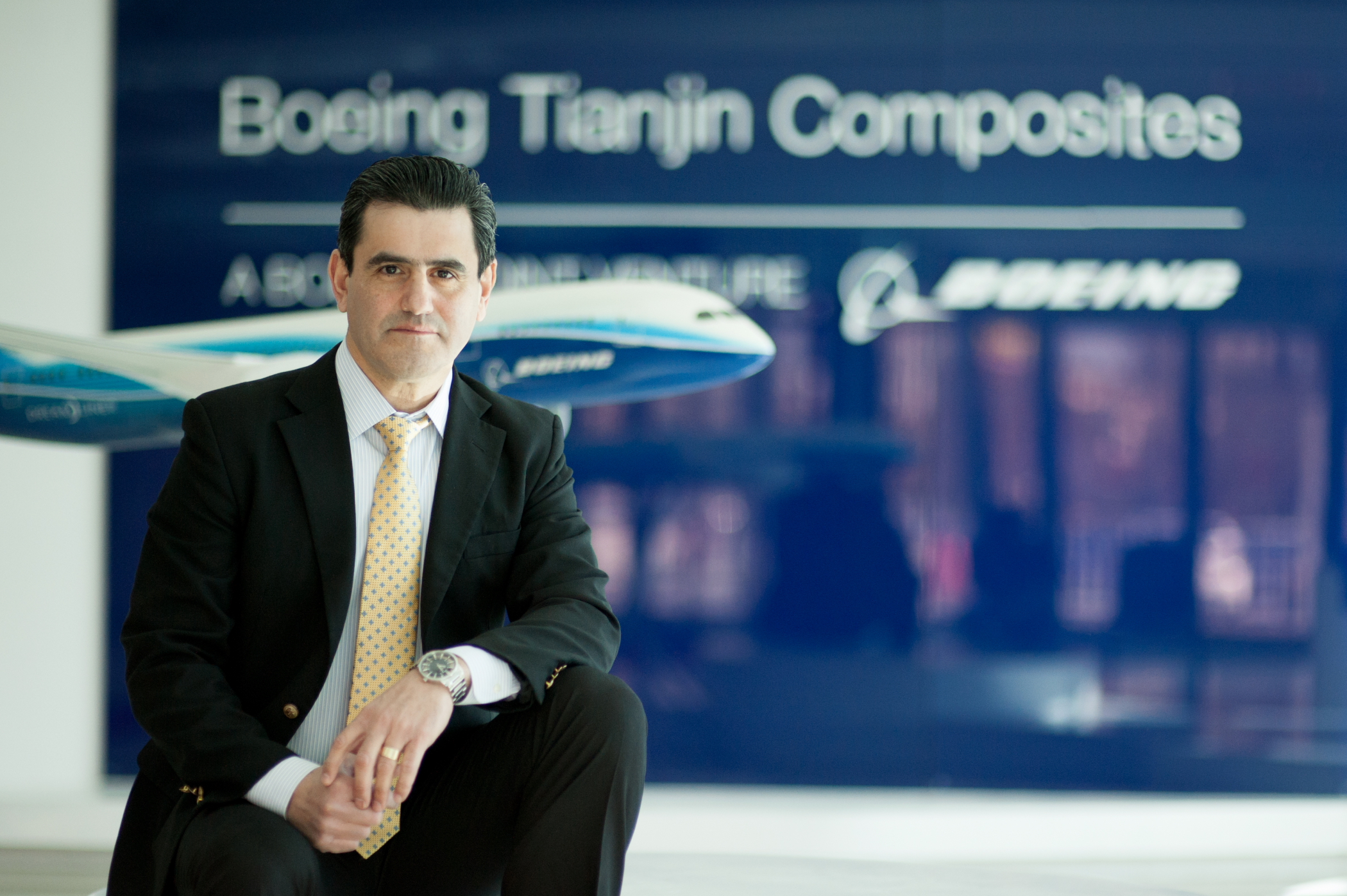 Jose Garza thrives in situations of great change. After growing up in a small town in Texas near the Mexican border, he seized an opportunity to move to Germany while working for the U.S. Air Force. Later in his career, he jumped at an opportunity to work halfway around the world in Shanghai. Now, as General Manager of Boeing Tianjin Composites, Garza is embarking on his second stint in China. Garza officially took the post in Tianjin leading 910 employees on Jan. 1.

We're doing extremely well. Last year we delivered over 150,000 parts almost 100 percent on time. So now we're looking to expand. That's our plan for the next five years – to grow.

This is my second time in China after spending two and a half years in Shanghai at another Boeing joint venture, which was a startup at the time. Boeing Tianjin Composites is a very mature company so we don't have the problems of a new business.

What was your first impression of Tianjin?

Outside the weather, I'm from south Texas, I'm liking Tianjin a lot. The one thing I like the best is the people. For lack of a better term, they're very real people, genuine people. I was able to forge relationships quickly.

How are the challenges of a mature business different from a new one?

One of the challenges of a mature company is that you need to always be hungry and act like a startup. You need to control costs and continue to improve on delivery and quality. We have to continue to invest in becoming lean and continue to challenge every employee to do their job more efficiently. Lean creates velocity, velocity creates capacity.

How do you communicate with your team?

Everyday, I walk the floor (with other managers) for the 1 o'clock safety walk. We make ourselves available to let employees know they can come and talk to us.

My management style is very people-oriented. I want to make sure we have high employee engagement. It's all about people, having a highly engaged workforce. I'd rather talk to folks in an informal meeting than review charts in a formal meeting.

What's your criteria for an engaged workforce?

They take pride in their work. They come to work every day and realize the parts we're making are touching the lives of millions of fliers every day. Millions of fliers rely on the quality of our products to arrive safely at their destination.

I like to relate to get to know employees on a personal level. Then you know what's important for that person.

Who has influenced your management style?

A lot of leaders over the years. I learn a little bit from every leader I work for, even the difficult ones! I started my career working for the US Air Force as a civilian. At a leadership meeting I attended, there was a gentleman, Tony Deluca, who said if you want to be great leader, you have to be global.

That's when I volunteered for my first expat experience in Germany. And I thought I was multicultural since I was born in Texas and raised in Mexico! The first thing I learned was not to throw water in windshield when it's cold! I arrived in Germany for the worst winter in years, having never seen snow once. (I also learned that you need to use) different styles to reach an agreement in a negotiation. You can't forget what's important to the other side.

I like to think that my leadership has been highly influenced by the Boeing culture. When you look at someone like Ray Conner, Vice Chairman of The Boeing Company and CEO of Boeing Commercial Airplanes, he started his career as a mechanic. This is a company where you can grow as far as you want to grow. There are no limitations. It's the same with Boeing Tianjin Composites. We have directors who started as assistants or operators.

This is a company where an employee can spend their entire career here and their children can have a career here, too. It's a little unusual in China, where we see the younger generation wants to change jobs more often. But we've been able to gain employee loyalty. We opened in 1999 and just gave 15-year certificates to some employees.

If you see a star in your team, how do you foster their potential?

You can't be greedy when you have a high-potential person. You can't keep them for (your own) team. Instead, you have to allow them to grow where they need to grow, and that might even be to help them look for the next opportunity.

I would challenge a high-potential person to do something outside their comfort zone. I would give them new assignments to stretch them. A star is only made when you go through challenges.

What books have inspired you?

Boeing sends you to leadership school and gives you great reading material. One great book is Who Moved My Cheese by Spencer Johnson. It's all about change and how we roll out change and absorb change in day-to-day work life. That's one of my all-time favorites. A short, fast read.

Is that a lesson that translates to your personal life as well?

Yes. Every day I say I'm going to change my routine because that's one of the basics of weightlifting. You have to challenge the muscles differently.

When you're not at Boeing, what are your main interests?

Mostly exercising. My wife and I train together for emotional support. She wants to compete in bodybuilding. I help her. We used to have a trainer in the US, but here in China we train ourselves. It keeps the relationship fresh.