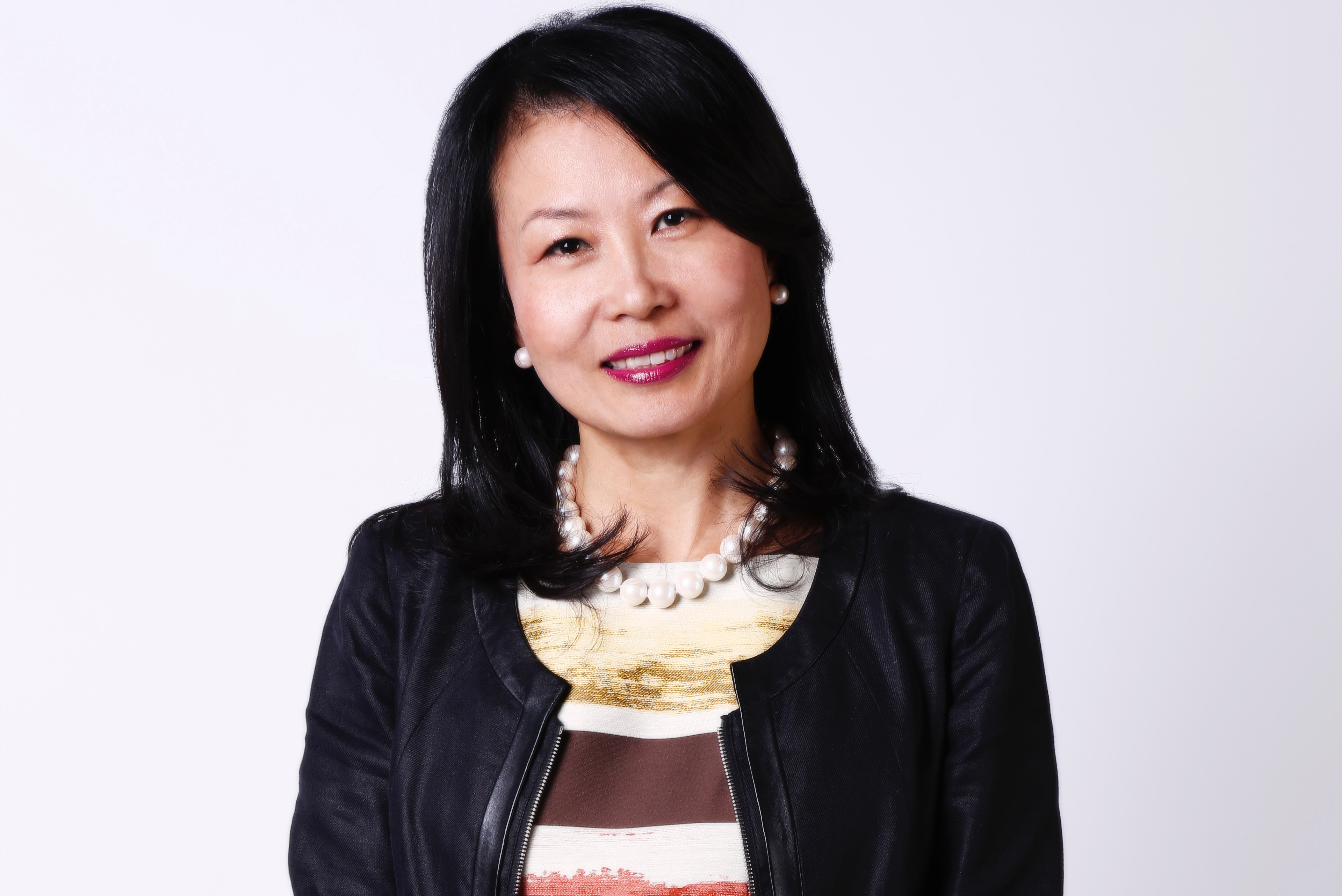 Su Cheng Harris-Simpson has owned her own business for seven years now, yet for a long time, she shied away from the label “entrepreneur.” Now she’s found a title she’s comfortable with – “social entrepreneur” – because it embraces the larger mission she started her company, SCHS Asia, with: creating social impact and empowering women. In recent years, a great deal of SCHS Asia's work has been toward increasing the prominence of women-owned businesses in the supply chain. The company offers clients event services, representative services for companies wanting to have a presence in the Asian market and diversity programming, with a special focus on women’s empowerment.

Before starting her business, Harris-Simpson honed her skills in project management, event management and fundraising at United Technologies Corporation in China, Boeing and the Capital Club in Beijing.

She’s called Beijing home since 1997, and AmCham China has been a second home of sorts. Harris-Simpson currently co-chairs the Small Business and Entrepreneur Forum, the Golf Programs Committee and the Women’s Professional Committee, which she helped found. She’s served on the board, as well, including two years as Vice Chair in 2002 and 2003. Harris-Simpson also contributed to the AmCham China community by running the American Ball for more than a decade, raising $1.5 million for charity.

Now she’s looking to take her own women-owned business to the next level, and hopes to cross the $1 million mark while staying true to her passions.

How did you start your own business?

I have learned more in my seven years of being an entrepreneur than I have in my entire career as a “corporate” person.

Unlike many others who went into a business with a vision, I didn’t. I was doing projects already and that made it easier to say, “OK, let’s just start.”

(In the beginning,) I was always willing to help – cover my costs, do the work, and that was good enough. But for sustainability for any company, you can’t have that model and survive.

We’ve been blessed and able to, through word of mouth, get business. But now, we are focused on growing the business strategically. Now, we have to be focused. Not necessarily for myself, but for my people. It’s important that as a leader you must think of the welfare and health of the company for its people. That’s the reason for the change in my focus to think more strategically and build a global business. I’m restructuring to be commercially more viable. For example, we’re standing firm to our pricing structure rather than allowing negotiations.

What do you enjoy about owning a business?

When I was working in companies, I was what you call the “intra-preneur” because I always ran my own department and I didn’t like hands-on management. In many ways starting my own business wasn’t difficult. The freedom that comes with it is what I love about it. You can pick and choose your clients based on your specific passions. I’ve been blessed to do so.

As a small business owner, how do you measure success?

The definition of doing very well, by society, is to grow your company from $1 million to $5 million, increase employees from five to 5,000, accumulate wealth. I struggled with that because we did projects, worked with amazing people – but that (idea of success) always bothered me in the back of my mind. Am I not successful because I’m not measuring up?

I came to the conclusion that you can’t define your own success by how other people define it. My definition of success is that I am enjoying what I’m doing. I believe in the projects and people that I work with. I have made an impact in people’s lives and in the community and society. Am I happy with that? Yes. Am I making millions? No.

Why I recently changed my focus (about wanting to grow the business and increase its commercial viability) is because it’s not necessarily about me now – it’s about my community and the people I work with. They put a lot of heart and soul into it. I need to provide them a better future as well. That’s what a good leader would do, to build a good company for them. So that’s why my focus has changed, and I now want to build the company to something bigger.

What sort of goals do you have in mind?

I would like to build our company to be over $1 million. That’s the first step for any company. Throughout our timeline, we’ve been pretty close, but the last few years have been challenging. Now with a change in direction, we hope to achieve that.

What’s your next big project?

On Dec. 8 we will have our 5th annual marketplace in Shenzhen that connects buyers and women-owned suppliers. This is one thing I really feel strongly about, because I am a woman entrepreneur. It’s not easy to get into a supply chain at a multinational. That’s why I started working with WEConnect (a corporate-led nonprofit that facilitates sustainable economic growth by empowering women business owners), and I felt this affinity to this organization. Women only own 1 percent of the means of production. When women own, then decisions and policies change and leadership changes because of that.

Buying from women is also very important. Walmart was very gracious in setting up the “Women Owned” logo, which is now out internationally. They have packaging that shows that the company producing it is woman-owned. That gives you a choice. We worked with Walmart in the United States, and now it’s rolling out globally. If all the women recognized their value and strength in the purchasing process, and they could make a conscious decision to buy from women owned businesses just like they buy organic, I think they would (choose to support women).

Companies in the US, when they do their annual report, have to show diversity, especially if they are a supplier to the US government. In that case, they’re expected to show 20 percent diverse spend with their suppliers. Women is one of them – women, minorities, disabled, veterans and LGBT. That said, women have the biggest impact because if you look at all the other groups, women are part of all of them.

You’re a very natural communicator. Were you always this way?

I was born in Taiwan and grew up in the US. Couldn’t speak a word of English at 8 years old. Basically I didn’t speak for two years. I just listened because I was afraid to speak. I was determined to be American – as American as possible. I didn’t even acknowledge I was Chinese, and my father was white. I wanted to be Happy Days. That was my dream, to be accepted as an American. I don’t look at all American. Back then there weren’t that many Asians in Tacoma, Washington.

I was quite introverted and very, very shy. It changed when I found my voice through singing. I performed and I used to be scared to death to perform, but I love it. It was my way of coming out of myself. That was my way of forcing myself to get out.

My speaking was developed through performing and being in pageants. I loved it. It gave me a platform to speak publicly, present myself publicly and it gave me scholarship money. What’s not to like? That allowed me to have this confidence, but it was definitely years and years of practice.

Who has influenced your leadership style?

One of the best leaders I ever had was Richard Latham when I worked at UTC. He was, in my opinion, an amazing leader in the sense that he brought the team together. He supported us rather than managed us. And more importantly, an amazing, caring person who had your best interests in mind. Back then, he was the card-holding member of AmCham China for UTC. He allowed me to have the voting membership, and he encouraged me to run (for the board of AmCham China), and I was on the board for three years. Not all bosses would do that.

What books have influenced your approach to business?

It’s a very small book, but a powerful book: Who Moved My Cheese? by Spencer Johnson. It’s very poignant about change. I have to constantly remind myself: this is all we can expect is change. Too often we spend time fighting it instead of accepting it and moving on. That’s what business is about sometimes. Especially for SMEs sometimes there are things outside of our control and we need to stay focused. Change is your friend. If you embrace that completely it takes away a lot of anxiety and fear that all of us have. Fear of a new boss. Fear of corporate buy outs. Fear of moving to a new position. That book is a good, quick reminder of that.

People who have done well and flourished here in China are the people who accept change rather easily. It is constantly changing – not just yourself and your work but the society and people here in China.

In your free time, you said you like to go to the movies with your husband and daughter. Any recent favorites?

I liked Joy! It’s a movie based on a real story about a woman entrepreneur (played by Jennifer Lawrence) and how she made it big. It showed what a person can do when you find yourself and believe in yourself and have people in your life that believe in you.