MOU to Pave Way for New AmCham Chapter in Shandong 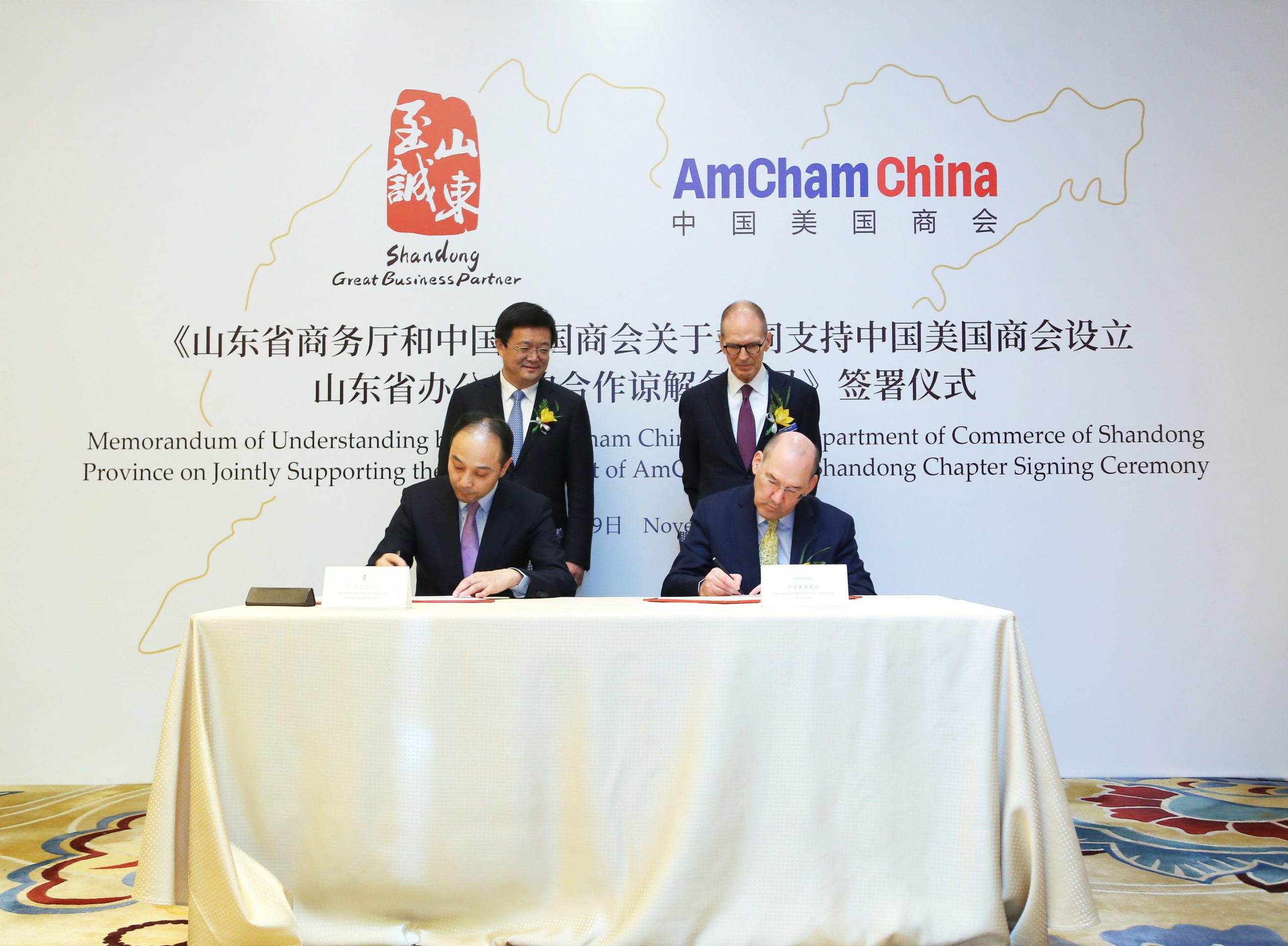 AmCham China is proud to announce the signing of a Memorandum of Understanding with the Commerce Department of Shandong Province, with the intention of jointly supporting the establishment of a Shandong Chapter for the Chamber and turning the Shandong market into a strategic growth pillar for American business in China.

Built on two years’ of hard work between the two sides, which included the 2017 Shandong-US Business Partnership Week and the 2018 Conference of Greater Business Partners, among other regular meetings and exchanges, the agreement was signed by Alan Beebe, AmCham China President, and Zhang Weike, Deputy Director-General of the Department of Commerce of Shandong Province on November 29 in Beijing.

In the MOU, the Shandong Commerce Department acknowledged that AmCham China, as the largest foreign chamber of commerce in China, has made tremendous, long-term efforts to advance US-China bilateral trade relations and expressed hopes that AmCham China will continue its support for Shandong Province’s development of the ten prioritized industries listed in its “Key Programs of New and Old Kinetic Energy Conversion”.

The department also expressed hopes that there can be a strong, sustainable and innovative platform between the provincial and municipal governments, organizations and local businesses, and AmCham China members, Forums and Committees, and the larger American business community to hold dialogues and produce concrete outcomes.

AmCham China pledged to encourage its membership of predominantly American companies to welcome Shandong Province’s business environment and service platform brands of “Friendly Shandong” and “Select Shandong.” It also acknowledged the business and trade importance for Shandong as a long-term investment destination and target market in China for American companies.

Furthermore, the Shandong Commerce Department agreed to support AmCham China to promote activities that work towards the Shandong Chapter’s establishment, communicate with AmCham China on the Department’s key work and activities that would benefit the Chapter, and coordinate relevant government resources that can help create regular dialogues between American companies in Shandong and the province’s government agencies.

Meanwhile, AmCham China agreed to expedite the establishment of the Shandong Chapter, while keeping the Commerce department updated on its progress on a regular basis, roll out campaigns to promote the establishment of the Shandong Chapter as well as the business and investment environment of the province, and hold more programs in Shandong around the key work plans of the commerce department and AmCham China.

Commenting on the partnership, AmCham China Chairman William Zarit said, “With more than 1,100 American companies operating in Shandong province, which has the third highest GDP out of all the provinces in China, it’s the perfect time to look at establishing our newest chapter there. It’s an incredibly important part of China for us and I am looking forward to remaining personally involved in the process as we explore our next steps.”

At the signing ceremony, Shandong Commerce Department Director-General She Chunming commented that Zarit’s recent speech in Shandong province was both well received and impactful, and noted that he was especially looking forward to seeing the new AmCham China chapter established in Shandong.