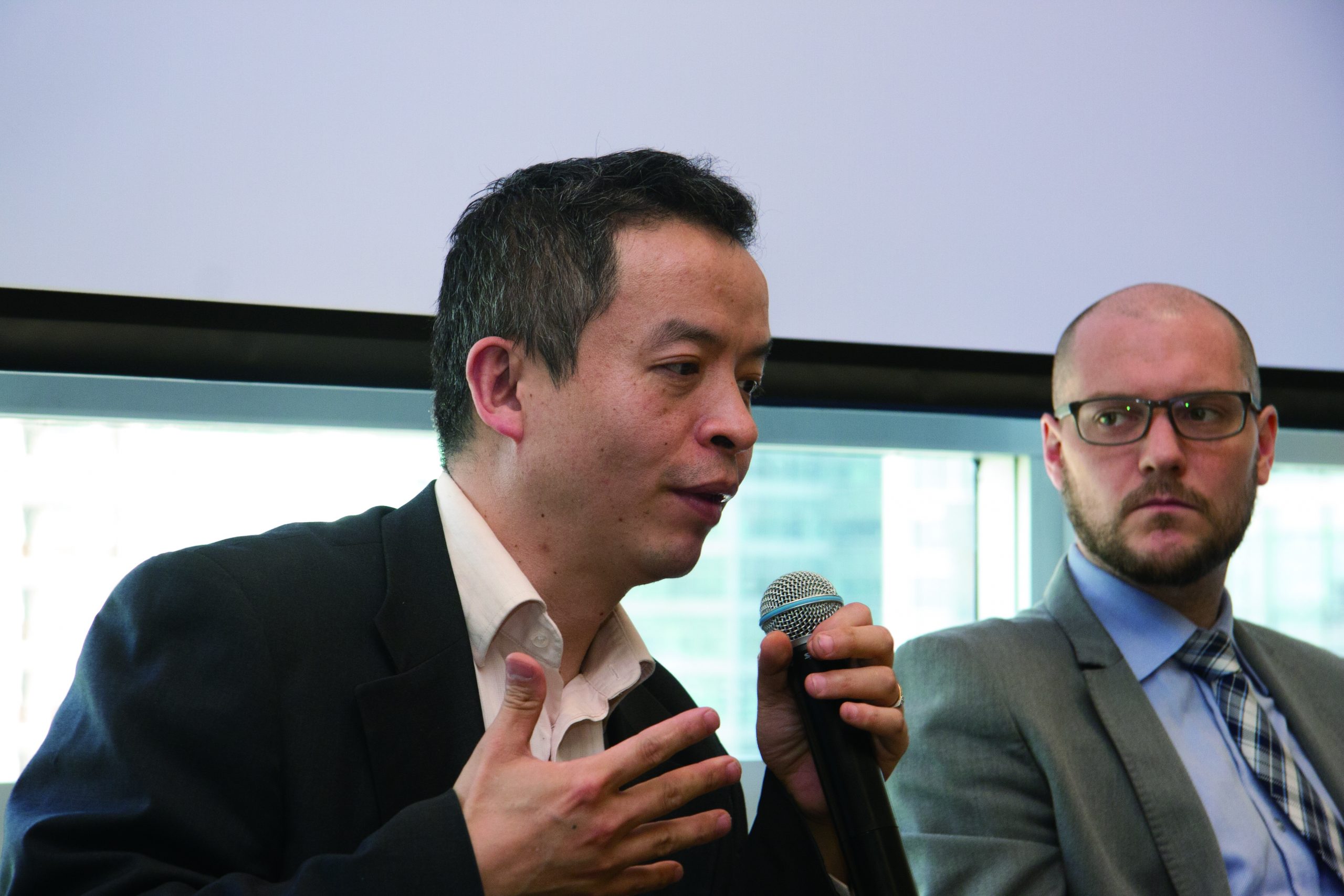 As the Chinese economy has slowed for the fourth straight year, party officials and international economic analysts are adjusting their policies and future projections to cope with the transition. This atmosphere puts economic reform at a crucial crossroads. In an effort to shed light on the state of reforms and provide realistic short-term expectations, AmCham China hosted the first installment in the China Reform Series on May 19.

The panel included four accomplished China watchers and analysts with over 70 years of combined experience observing the economy. Bill Bishop, familiar to many for his Sinocism email newsletter, gave one of his last talks as a Beijing resident before moving to Washington, D.C. Professor Tao Ran (pictured, left) serves as Vice Dean of the Hanqing School of Economics and Finance at Renmin University. Andrew Batson leads Gavekal Dragonomics’ Chinese economic analysis team as Director of China Research. Andrew Polk (pictured, right) represented AmCham China member company the Conference Board, where he is a Senior Economist at their China Center for Economics and Business.

Revolving history of the Plenum

The Third Plenary Session of the Chinese Communist Party Central Committee has historically stood as the gateway to party reform and future policy. Once every five years, its doors swing open giving the world a glance into the playbook of China’s national strategy. In 1978, Deng Xiaoping and the 11th Central Committee’s Third Plenary Session announced the beginning of the Reform and Opening Up Policy, news that was met with hopeful anticipation from the global business community.

Twenty-five years later, Xi Jinping and the 18th Communist Party Congress created a similar buzz following the release of their own Third Plenum Document. The report laid out progressive economic and business reforms such as increased financial liberalization for interest and exchange rates, as well as allowing small to medium-sized domestic private banks to form. The report also highlights the importance of the market in the Chinese economy going forward, stating that the party would “allow the market to take a more central role in resource allocation.” In the two years following the document’s release, the party’s implementation of its reform strategy has received mixed feelings from onlookers around the world.

One challenge for reform, said Polk, is the term “new normal.” This concept of a new state of lower but stable (6.5 to 7 percent) GDP growth became a signature phrase of Xi in 2014 as he addressed concerns surrounding the slowdown. Polk said this perception of the economy going forward could pose problems to reform and to the economy as a whole.

“The reason we think the ‘new normal’ is a dangerous term for the new leadership to be using is because it lulls [the government] into a sense of complacency,” Polk said. Beyond a lack of urgency on reform policy, Polk also said this concept could blind officials to future issues. He suggested the the economy is actually entering a “long-term deterioration in the context of economic growth.” Currently, reform and growth are at odds, he argued, but reform is essential when looking at longer-term fundamental issues such as falling productivity.

Future reforms can be near impossible for analysts to predict due to fundamental differences in the prioritization of government policy, according to Batson. For example, reworking domestic political structures via the anti-corruption campaign is currently at the forefront of the party’s policy goals. This atmosphere makes it difficult to push through possible economic reforms.

Despite the current political atmosphere, some areas of the economy such as capital markets are experiencing progressive changes. One change in particular is the push to liberalize capital flows in Chinese stock and bond markets. Many perceive this shift to be a result of China’s desire to add the RMB to the prestigious International Monetary Fund’s Special Drawing Rights (SDR) basket, which currently includes the US dollar, British pound, euro and Japanese yen. The decision to add the RMB to this elite circle comes this fall, though the IMF could reconsider the case at its discretion.

Although this currency prestige would do little for the Chinese economy as a whole, Batson believes this step is an essential part of the Chinese Communist Party’s project of national revival on the global stage. Initiatives such as creating a bilateral investment treaty with the US and joining the Trans-Pacific Partnership may not be viewed as crucial economic endeavors by party officials. Instead these moves are looked at as necessary roles of a global power.

Why reform gets stuck

“Even with a well-designed reform strategy, it is often still difficult to push it through the bureaucracy,” Bishop said. Beyond moving policy through multiple levels of government, officials are reticent to push reform due to the effect it may have on their own political careers.

The corruption campaign under Xi has resulted in party members wishing to avoid public attention. No one wants to act on reform as they are afraid to hurt other party members first, and then themselves, Tao said.

Under stress from above and with questions looming over the larger effect of economic reform, the outlook for future changes is bleak. However, with capital markets slowly opening and the party opting to join an increasing number of international economic institutions, changes will continue to break through and make an impact.

Cameron O’Shaughnessy is a Communications Intern at AmCham China.