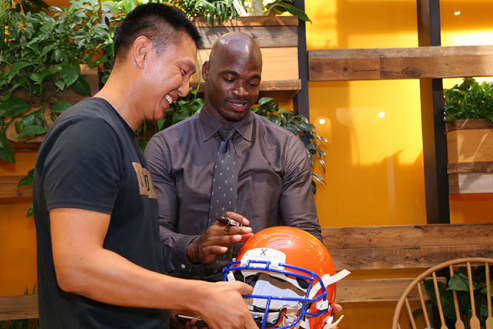 AmCham China was proud to host NFL running back and 2012 league MVP Adrian Peterson for the second installment of the Sports Committee’s “In Conversation With…” series, which brings distinguished professionals in the sports industry to our membership for up close and personal conversations.

Peterson is arguably the greatest active running back in the league and, standing at #8 on the career rushing yards list, is well on his way to the Hall of Fame. A seven-time Pro Bowl selection and four-time All Pro, in 2012 he reached the holy grail by rushing for more than 2000 yards in a single season and earning NFL MVP honors – just one year after tearing his ACL. After ten seasons in Minnesota, Peterson had brief spells with the New Orleans Saints and Arizona Cardinals, before joining the Washington Redskins at the start of the 2018 season. With Washington, he rushed for an impressive 1,042 yards and 7 touchdowns that season.

Following on from last year’s talk with former FC Barcelona President Joan Laporta, Peterson spoke to a packed room for well over an hour, accompanied by his wife Ashley and former AmCham China Northeast Chapter chair Leif Rogers about his stellar career in the NFL and about the early influences that helped foster his commitment to athletic excellence. He explained that as a younger child he always looked up to his older brother and admired his love of sport. When that brother sadly passed away, Peterson’s instinct was to honor him by emulating his brother’s passion.

He told the story of how his varsity coach at Palestine High School in Texas kept him on the junior varsity team. As luck would have it, in Peterson’s junior year, the varsity coach left for another nearby school. The junior varsity coach took over the team and the legend of Adrian Peterson was born. His first game in his junior year was against his former coach and Peterson had a top-notch game. In his junior year, he gained over 2,000 yards, adding more than 2,900 yards and in his senior year and earning a scholarship to the University of Oklahoma.

Peterson also spoke about the challenges of starting in the NFL and he told a great story of determination where on his first play from scrimmage at training camp, he received a hand-off and was confronted by future Hall of Fame defensive end Jared Allen, who tackled him hard and politely advised him that this career might not be for him. In his second carry from scrimmage, Peterson explained how it was the very same play, with the very same defensive end waiting for him, but, this time, Peterson “ran right through” Allen for a touchdown. That earned the rookie respect from his teammates, and things were different from then on out.

“It was a great and humbling opportunity to be able to listen to the lessons learned from a true
champion,” said Mazi Pielsticker from Nexxus Capital. “What makes him tick, get up in the morning for 13+ years, motivated, focused, and consistently outperforming at the highest level, is inspiring and has meaning beyond professional sports. To hear stories about his significant challenges in childhood and teenage years, shows this man’s great mental strength and ability to turn darkness into light. There’s nothing like hearing from someone who has gone out into the world and achieved like Adrian Peterson!”

Peterson was also asked about the growth of football in China, with the founder of China’s first officially recognized organized football league in attendance, and replied that it was great that the sports community here was trying to blaze new paths in China, advising that any new project is always tough, but that the leaders must be determined to move forward.

Peterson’s wife Ashley (pictured above, right) also spoke about the community work that the Adrian & Ashley Peterson Family Foundation carries out. The Foundation believes in encouraging and empowering individuals and families to work together to make a difference in communities, aiming to improve quality of life through resources and economic development, as well as transform communities through educational and economic empowerment.