No Executive Left Behind 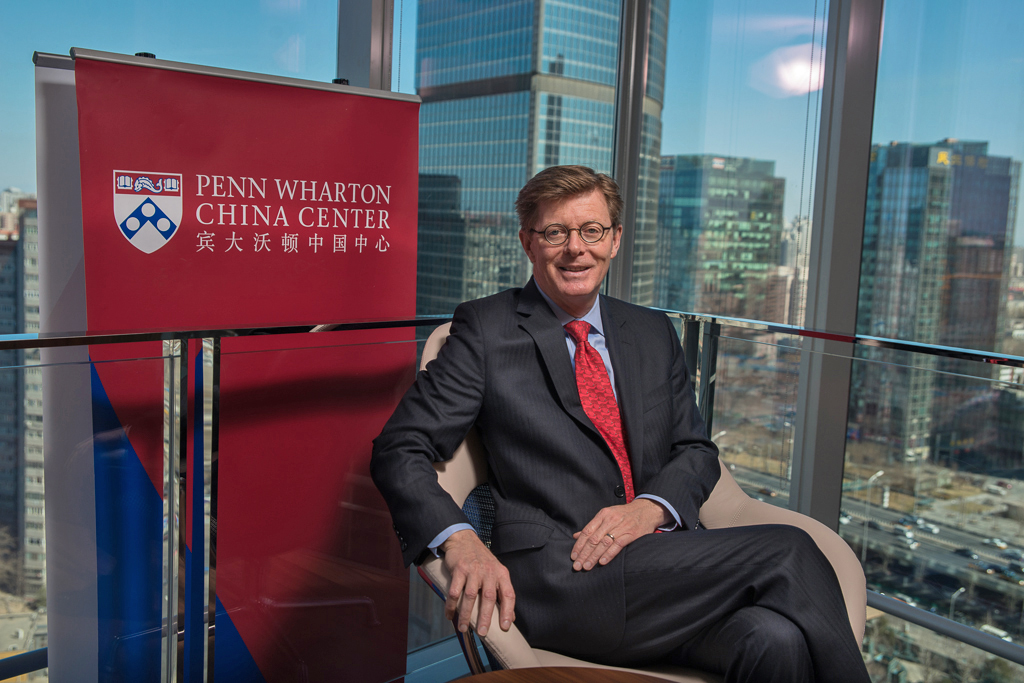 The Penn Wharton China Center opened its doors with a fanfare of events last month. Crowds gawked at the lofty location in the World Financial Center overlooking the neighboring towers of Beijing’s business district and the steady stream of traffic on the Third Ring Road. Even after the grand opening concluded March 10, the center continues with a six-month, events-packed honeymoon leading up to a gala in September. This is the shiny new face of American academics, now arrived in China.

The center’s events often place exchanges between Wharton academics and China’s business executives at the fore. These staged interactions are part of a larger conversation happening in China, where locally based executives are engaging with Western academia, all while never leaving the PRC. The thirst in China for knowledge and the quest to become global leaders has led many American universities like Penn to come straight to the need, like firefighters to smoke.

In the 2015 AmCham China Business Climate Survey, a shortage of qualified employees and management stand as the No.3 and 4 challenges for foreign businesses in China. These concerns have remained in the top-five challenges of the survey for the past four consecutive years. Among AmCham China’s member companies, most have local talent in 75 percent of the top China management posts. In fact, a majority of members of AmCham China are Chinese citizens. As talented professionals in China take on increasingly global roles in foreign and domestic companies, they are looking for global education at the management level, and don’t want to go far to get it.

The US is the top destination for Asians completing the GMAT, the test considered for most MBA programs. A 2014 report by the Council of Graduate Schools shows that applications from Chinese students to US graduate schools has tapered in the last two years, but demand remains strong, especially for MBAs.

“Studying in the US is a supplement to what cannot be garnered in the education system in China,” says Ira Cohen, Vice President of Universal Ideas and AmCham China Board Governor with 30 years of experience in education. “The education sector is the bottleneck for development in China.”

So rather than just recruiting students in China, which the Penn Wharton China Center and other facilities are partially devoted to, American colleges and business schools see a major opportunity in coming to close this education gap for management and executives based in China. They do this through MBA and Executive MBA (EMBA) programs, non-degree training programs and customized courses held inside companies.

Executive training could have a major impact on the future of China’s business leadership. The increase in competition in this sector, with many Beijing-based programs in their inaugural or second year, indicates a healthy market for executive education. But this segment also has unique challenges, particularly with government regulations. The anti-corruption campaign has recently targeted EMBAs. US schools are having to do a little learning along the way, too, in order to keep up with this market.

EMBAs ARE THE ‘BREAD AND BUTTER’

The first US MBA program to arrive in China was from the State University of New York (SUNY) School of Management in 1984, headquartered at Dalian University of Technology. This collaboration was supported by the Chinese Ministry of Education, the US Department of Commerce and President Ronald Reagan. But the school shuttered a few years later in the aftermath of the Tiananmen Square incident.

Now, stability has returned, and many US schools are recruiting heavily for EMBA candidates. The University of Maryland’s Smith School of Business has found steady business for the past decade. Senior Program Manager Ronald Bastyr called EMBAs the school’s “bread and butter.” These part-time degrees, usually spaced across 18 to 22 months, target already-established professionals with a bit more financial power, either to pay for themselves or have their company sponsor them. Those in EMBA programs are usually management level, with 10 or more years of experience, Bastyr says, and looking to take the next step into senior management. For this kind of person, a higher price tag can be worth it if the cohort offers the right networking opportunities with other executives on their way up.

Bastyr says about 75 percent of Smith’s students are Chinese. Their pitch: acquire a US master’s degree without leaving China, and at about 30 percent of the cost.

“They don’t need a Chinese business degree, they need something fresh,” he says. “The knowledge you gain is global.”

This month, Smith welcomed its newest cohort of EMBA students, who will graduate in late 2016, to the program’s headquarters on the campus of UIBE, inside the Fourth Ring Road in Northeast Beijing.

Bastyr calls this program their “bread and butter” because of its steady demand. The school has also started marketing custom, non-degree courses to companies last year, but those offerings have proven to be a harder sell due to the high price tag and weeklong time commitment needed from senior management. Getting that program rolling will be a “slower burn” for the Smith team.

Smith and several other Beijing-based EMBA programs usually attract classes made up of mostly Chinese students. A few programs chaffe against this trend, hoping to create a more international feel with enrollment from expats.

Cohen agrees that creating a Western learning environment depends on the diversity of the cohort.

Cohen believes China’s future as a center of innovation depends on whether its education system begins to embrace Socratic methods over Confucian ones, empowering students to ask questions rather than follow directions. An open-enquiry approach will foster the type of global leadership in science and technology that China’s leadership is looking for, he says. “However, no one should hold their breath on this adoption,” he adds.

Few industries haven’t been touched by the anti-corruption campaign, and education is no exception. Last year, government officials were taken out of EMBA programs, and employees of state-owned enterprises were given special restrictions, including only being able to attend if they pay for themselves individually, according to the Financial Times. Reasons cited in media reports included the unfair access to government officials these programs grant to those in the private sector also on the course.

While not as devastating as the conditions that pushed out the SUNY MBA program in the 1980s, this new regulation has impacted many American universities operating in China. Cohen previously worked as director of two EMBA programs in Beijing, and says he doesn't envy the position his old colleagues must have been put in to meet the same recruitment goals after the crackdown.

‘GETTING AWAY FROM ROUTINE’

Back at the Penn Wharton China Center in Guomao, Jeffrey Bernstein and John Zhang lead a staff of four in creating an environment that is part educational embassy, part research center.

Marketing professor Zhang is an expert in pricing, with recent research published on the unintended consequences of price wars amongst competitors on the Internet. He received his undergrad degree in his native province of Hubei. His background in China, paired with elite Western graduate degrees, makes him uniquely qualified to train Chinese executives about pricing strategies in this new era of China-based, Western-prescribed teaching.

Zhang says the center “will serve as a training ground for current and future global leaders across China’s public and private sectors.” Zhang and other faculty did this work before the center opened, too, through Penn Wharton China Consulting. They’ve worked with Bank of Beijing, Longfor Properties, the Ministry for Environmental Protection and several AmCham China member companies.

Coco Zhang, a Shanghai-based executive at a US company, attended one such training with one of her colleagues. During the two-week long program, she took a diagnostic test to find out her personal negotiation style, and discovered that she tends to make concessions. When put into a negotiation simulation, she saw students of different styles produce strikingly different results. Zhang says she will shift her style to be more aggressive in the future.

“One can always learn from work, but one will learn more effectively when getting away from routine,” Zhang says.

This kind of corporate-targeted, in-person program continues to expand. On the other hand, conversations about the future of education happening on a global scale are focusing on online education. Kevin Carey, author of The End of College, heralds the sea change that low-cost, online education will bring for the general population which doesn’t normally have access into academia.

Top universities such as Harvard and MIT have invested a great deal in massive online open courses (MOOCs) like Coursera and EdX. In China, online courses haven’t yet taken off, though a newly launched joint MOOC from Peking University and tech giant Alibaba may soon change that.

These developments have yet to be borne out. For now, the emphasis for many US schools remains on face-to-face executive education.

One of the newer entrants to the scene, Johns Hopkins Carey School of Business, a new AmCham China member, has recently taken its first step into the market: establishing a local representative, Assistant Dean for Global Collaborations Oksana Carlson. Even in this initial phase, the school, which was founded in 2007, is able to better engage with alumni and prospective students, recently holding an event for 200 newly-admitted students.

Carlson says in her six years with Carey, she’s already seen a change in the education level of MBA candidates.

“They’re better prepared; their English is better,” she says. “It’s very noticeable that the quality of students is getting better.”