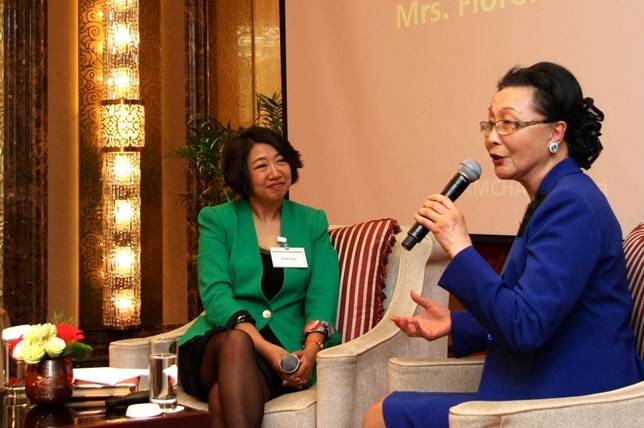 On Wednesday, April 1, the Women's Professional Committee celebrated Florence Fang's 81st birthday and all she has contributed to the US-China relationship. Fang, an intrepid entrepreneur, was the publisher of several influential media outlets such as the San Francisico Examiner and Asia Week. Now her efforts are mostly philanthropic: she is Chairwoman of the Florence Fang Family Foundation, which supports programs that connect the US and China, and a founding member of the 100,000 Strong Foundation, an offshoot of an Obama administration initiative that seeks to strengthen US-China relations through educational exchange and language learning.

AmCham China recently forged a strategic partnership with the foundation to support its mission. During the celebration at the China World Hotel, AmCham China Vice Chair Lin Gao interviewed the legendary woman, and asked her about the 100,000 Strong partnership:

Lin Gao: I've had people ask me why are we sending American students to China. They say Americans are supposed to be rich, why can't they come on their own?

Florence Fang: We all know, lots of Chinese students come to the United States to study. I would say China understands America more than America understands China. So President Obama realized that it's so important to send American people to China to understand China. In America, the young people, generally speaking, they are so comfortable, they don't have the desire to go out to study. For instance, I just talked to the ambassador about my grandson, who is 16. I said to him that he has to got go to China. He gave all kind of reasons not to go. I told him, because you're so comfortable in the United States, you've got to learn how to fly. The United States is a nest, it's so comfortable, we have to push you out, so you'll learn how to fly, see the world.