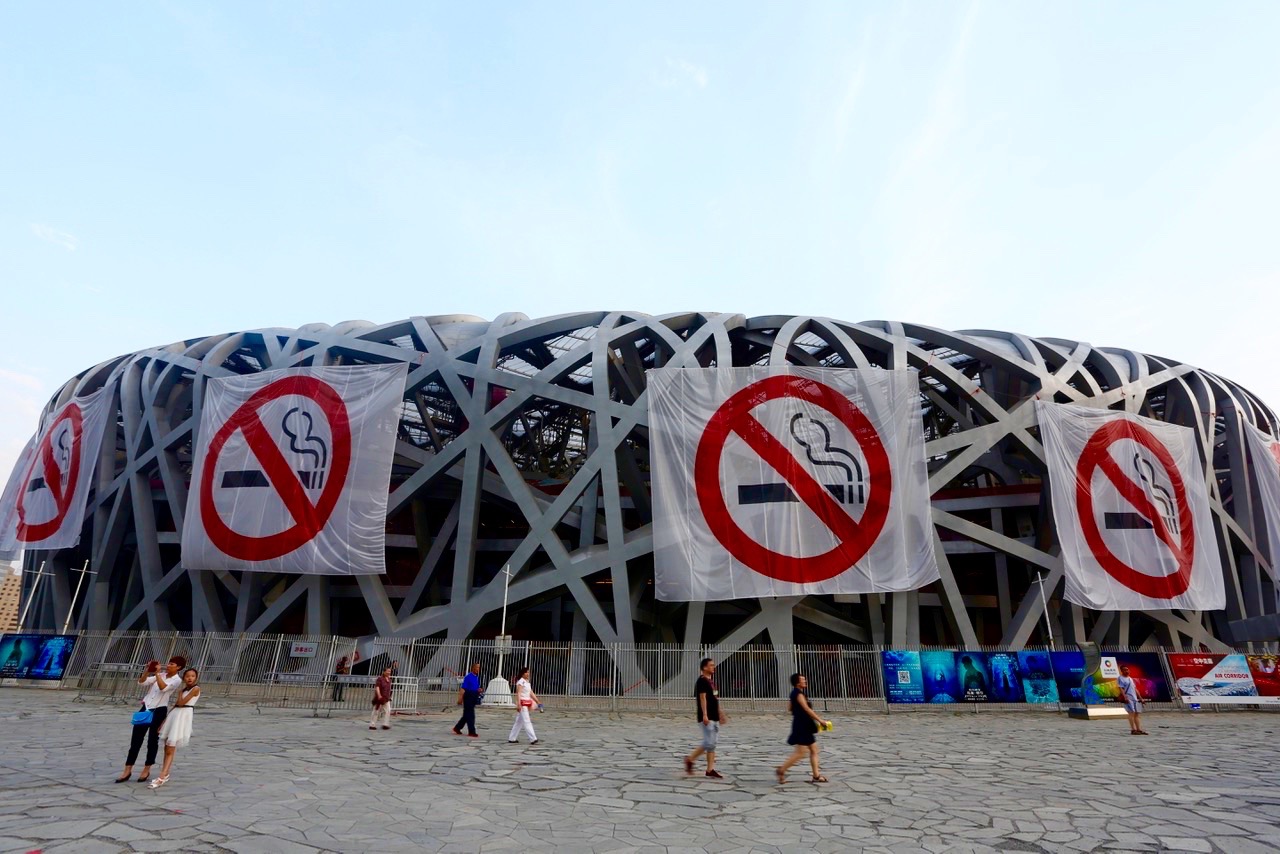 On the eve of Beijing’s city-wide indoor smoking ban, the Bird’s Nest National Stadium morphed into a giant no-smoking sign. Banners draped across the icon of the 2008 Olympics announced the new law's arrival on June 1. The last time Beijing cracked down on smokers was in the lead up to the 2008 Summer Games. Now, with a new Olympics in Beijing's future and China's strongest anti-smoking law to date in the books, the city is getting serious about second-hand smoke.

Getting all employees, customers and clients on board with the ban won't be easy in a city of 4 million smokers. According to the World Health Organization (WHO), a third of China's population smokes, and only a quarter understands the health effects of smoking. Every year, approximately 1.3 million people die in China as the result of using tobacco products.

About 100,000 more die from second-hand smoke exposure. According to the WHO's Report of China City Adult Tobacco Survey 2013-14, before the ban, more than one out of three Beijingers were exposed to second-hand smoke in the workplace. At restaurants, it was around two out of three. The WHO has also reported that the air quality in a restaurant with smokers deteriorates to rapidly: air quality readings of 600 with three smokers; 1200 with five; off the scale with 20 smokers in a crowded bar. This makes the Airpocalypse look like a walk in the park.

“Making indoor environments smoke free is the way to start fixing this,” said Angela Pratt, head of the Tobacco Free Initiative at the WHO's China office on Dongzhimenwai Dajie in Beijing. Tobacco control initiatives enacted worldwide show that smoking bans reduce second-hand smoke exposure as well as the overall prevalence of smoking. “The Beijing law is the toughest in China so far,” Pratt said, explaining that prior laws had no teeth. “It's important for Beijing, and paves the way at a national level.”

Deaths related to tobacco cost the nation RMB 186 billion. Despite China's stake in tobacco – domestic tobacco companies are state-owned enterprises – the Beijing law shows a strong commitment to reducing the harm of tobacco products to the population.

The US is also committed to this success. The most recent round of the US-China Strategic and Economic Dialogue touched on the continued efforts of the China-US Smoke-Free Workplaces Initiative, a bilateral partnership established in 2012. Currently in phase II, the program is launching training workshops. Johnson & Johnson recently led one such training in Shanghai, sharing its experiences and best practices with local companies.

Four months into the ban, local enforcement has made modest gains. The Beijing Municipal Commission of Health and Family Planning has fined 102 businesses and 230 individuals a total of RMB 251,800. The tip-off hotline for reporting offenders (12320) has garnered thousands of complaints. Businesses say they feel the law legitimizes their own efforts to go smoke-free.

“Sometimes we have patients who try to hide in the toilet to smoke, and they even try to break the detectors,” said Sylvia Pan, General Manager at Beijing United Family and Clinics. “Before we had no way to penalize them. Now, with this ban, we can say that those people need to be penalized according to the ban and ask them for compensation.”

Without the combined intervention of US and Chinese public and private sectors, tobacco and second-hand smoke will continue to have a toll on the Chinese workforce and overall health. Here a few examples of partners in this effort share their experiences and ideas for the future.

Nip it in the butt

Previous iterations of indoor smoking bans had big loopholes but to lenient penalties, according to Pratt. The new one bears potential not just because the wording is watertight (something the WHO encouraged during the drafting process) and enforcement is stronger (with more than 1,000 trained inspectors), but because the Beijing government is investing in services that support smoking cessation. For example, anyone can dial up a free health line to speak with counselors trained in assisting quitters. While a smoking ban could simply push smokers off the premises, WHO data from around the world shows that smoking bans lead many to give up the habit.

The China-US Smoke-free Workplace Initiative has helped businesses take the same supportive approach to smoking bans. The China Centers for Disease Control and Prevention looked to Johnson & Johnson for advice on how to successfully implement a smoke-free policy across a population.

The initiative provides training sessions city by city reflect the spread of smoke-free workplace policies being introduced across China. Last year, the workshop series visited Beijing, Shenzhen and Qingdao, and the year prior Johnson & Johnson conducted a seminar in Shanghai.

“There's a lot of interest among companies who don't necessarily have the tools and know-how to go about that effectively,” said Mark Parascandola, Program Director of Tobacco Control Research Branch at the US National Institutes for Health, one of the American partners of the initiative.

The members of the initiative share an interest in removing smoking from China's public spaces. The founding governmental members are China's Ministry of Health and the US' Department of Health and Human Services. More than 285 Chinese and American private enterprises have signed on to support the effort, including Baidu, Sohu, Edelman and Pfizer.

“That number shows that there are a lot of businesses interested in promoting a healthy workplace,” Parascandola said.

Taking cigarettes off the menu

Beijing authorities reported to Xinhua that more than half of the complaints on the tip-off hotline named offenders in restaurants and office buildings. These two battlegrounds will need the full support of private business.

Blue Frog, a Shanghai-headquartered bar and grill chain, enforces a no-smoking policy at its 16 Beijing and Shanghai locations, and has done since 2008.

“It’s the way of the world and the way China is going,” said Bob Boyce, Founder of Blue Frog. “It’s better to face it now than push it down the road.”

In the outset, Boyce said, the company lost customers to competing bars who hadn’t nixed smoking. But over the long term, the policy turned out to be a shrewd one.

“The overwhelming response from customers and even a lot of smokers was, ‘Wow, this is so much better,’” Boyce said. “We saw an increase in our food sales. People were staying to eat (not just drink) because it was a more pleasant environment when it was smoke free.”

The preference for clean air extends from burger lovers to real estate tenants.

“The smoking ban is developing the standards and protocol that every developer and building operator will have to follow in the development, design, construction and operation process,” Huang said.

CBRE faced adversity from its Chinese holdings when it first unveiled the policy. The culture of indoor smoking in China impacted on-site managers and employees, on whom the success of the policy depended.

Boyce also experienced cultural indifference to indoor smoking in his staff. He combatted the problem by bringing enforcement to the individual level: Blue Frog employees cannot smoke in any public place while still in uniform. He hopes employees, already held accountable for themselves, will then hold customers to the same standard and enforce the anti-smoking rule, especially now that it's Beijing law, not just Blue Frog law.

The importance of property management for the success of the Beijing law was never more visible than at the April 22 media event promoting the smoking ban. SOHO President Pan Shiyi stood on stage as one of the faces of the anti-smoking campaign, and he pledged that all SOHO buildings would comply with the law to the fullest extent. And along with badminton star Bao Chunlai and singer Zhang Liangying, actor-turned-restauranteur Ren Quan spoke out about the importance of keeping public spaces free of smoke. The celebrity status of these figures can help with public awareness, but, more importantly, their role as decision makers in the private sector may be able to shift public behaviors.

The smoking ban, above all, has sparked conversation about smoking throughout Beijing. While a third of China smokes, only a quarter of the population understands the health effects of smoking.

Monica Cui, Executive Director of Safe Kids Worldwide-China, said her friends have been discussing the ban since its approval in 2014, and sharing updates on their attempts to quit. “Such things never happened before,” Cui said.

In her work, however, Cui focuses on the children's safety, and she still finds the educational approach to the new law lacking.

“The messages seem more focused on adult smokers, such as saying smoking will lead to heart attack and cancer,” Cui said. “The youth may think this is a long way away from them, these adult diseases.”

Many other groups, while excited for the current law, still want more.

A 2015 report from the WHO notes that China taxes cigarettes relatively lightly compared to other countries in the region, and cigarette prices remain dirt cheap at RMB 10 for a pack of 20. The WHO suggests raising taxes from the current 40 percent of the retail price to 75 percent. Other enhancements could include adding more graphic health warnings to packaging, or even removing all branding – a move Australia recently enacted – to curb the appeal to minors.

Currently, there is a draft law in the works that would create a nation-wide indoor smoking ban.

“Looking at the history of other countries, laws often times start at the local level first before you see national-level policies,” Parascandola said. It's up to Beijing businesses now to move the trend forward.