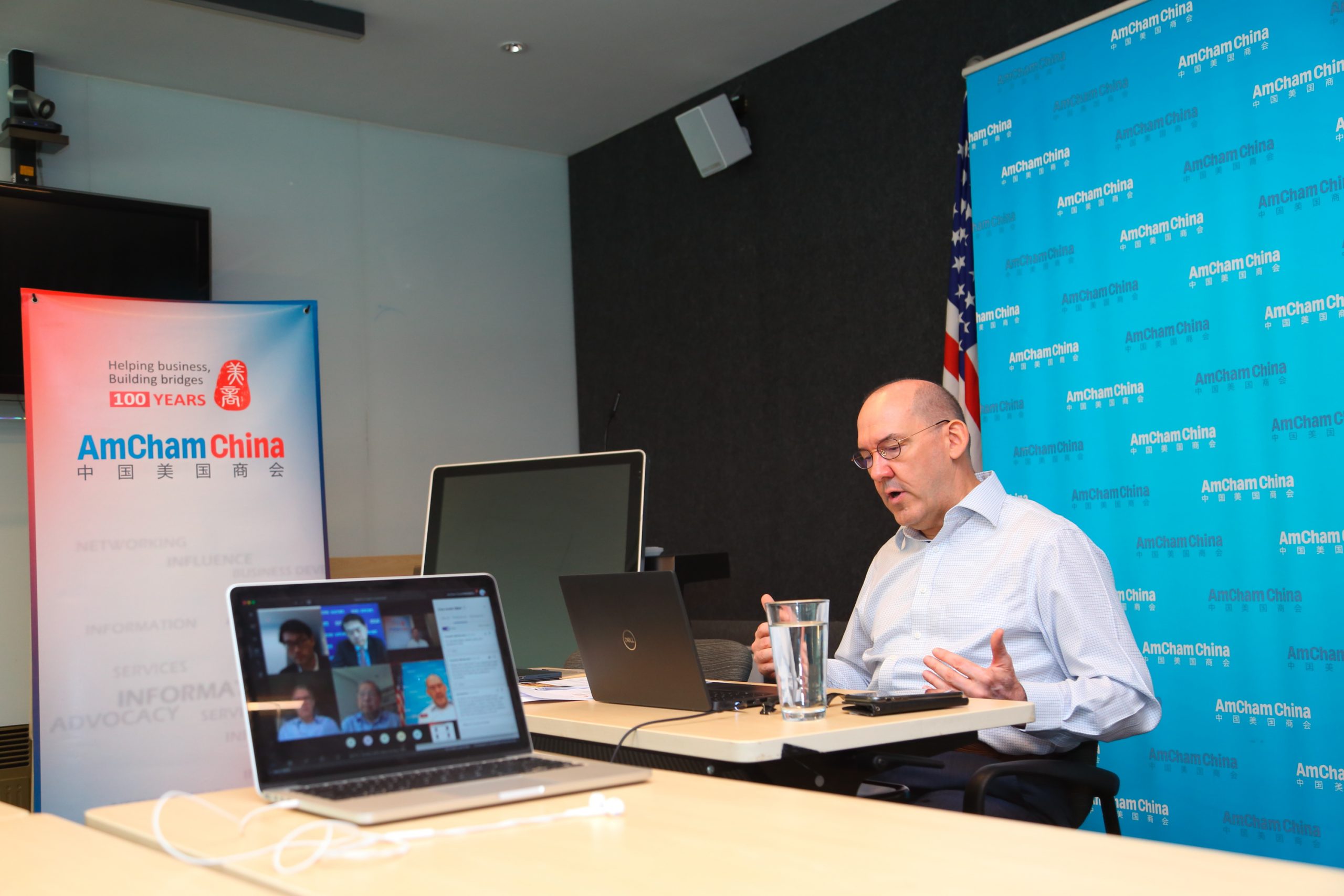 This year’s Government Affairs Annual Conference centered on the US-China relationship, globalization, and the role of multi-national corporations against the backdrop of a spreading pandemic and a deteriorating bilateral relationship. The conference set apart two panel discussions with one comprising four government affairs professionals from AmCham China member companies to share best practices and the evolving profession.

This year, COVID-19 has wrecked businesses across all industries. As AmCham China Chairman Greg Gilligan indicated in his opening remarks, AmCham China’s most recent Flash Survey on the impact of COVID-19 found that, “even while the operations of member companies are starting to return to normal across the board in China, a significant portion, almost 20% of members expect their China revenues to decline from 10-25% in 2020, which is forcing many to continue to assess both their short-term and long-term strategies.”

Recognizing the challenges COVID-19 imposed upon the whole world and the cooperation forged between the US and China to fight against the pandemic, US Ambassador to China Terry Branstad, in pre-recorded remarks, thanked the US business community and AmCham China for playing a crucial role in contributing to coronavirus relief efforts. Since the outbreak of COVID-19 in December 2019, he noted that AmCham China has tracked donations made by community members totaling over RMB 600 million in donations and PPE to the most severely impacted areas in Hubei province. In terms of the Phase One trade agreement, which many member companies are closely following up on, Ambassador Branstad pointed out that the two sides are committed to implementing the deal.

Although businesses are currently teetering, some still remain hopeful and bet on the interdependence of the US-China trade relations. Among those mildly hopeful is Mr. Huang Qifan, Vice Chairman at the China Center for International Economic Exchanges and former mayor of Chongqing. In his keynote remarks, he argued that the cost of supply chain relocation, labor cost, difficulties of rebuilding supporting industrial clusters and infrastructures are among several major reasons that there likely won’t be a wave of radical relocation of supply chains. As COVID-19 continued to wreak havoc on the global economy, upholding and strengthening globalization, which optimizes the allocation of resources through interconnected global supply chains, should be the right way out, Huang contended. He believed that globalization, notwithstanding experiencing a strong headwind today, would eventually be in an upward spiral.

For the American business community in China, the past few years have been nothing but turbulent – a US-China trade dispute, a subsequent agreement that is off to a rocky start, fierce competition and expanding distrust in fields such as technology and academia, and the spread of a global pandemic compounds these existing issues.

When asked about the heated confrontation between the world’s two largest economies, Dr. Yukon Huang, a Carnegie Asia Program Senior Fellow, argued that decoupling is already happening across technology, people, investment, economics, and scientific cooperation. The biggest impact will be a decoupling of “ideas” between borders. With respect to supply chains, the short-term impacts will be capacity changes and shifts in production decisions. The longer-term impact is on the potential for relocation of manufacturing operations from China to other jurisdictions, with implications for costs and global economic growth.

David Hoffman, Senior Vice President for Asia at the Conference Board, pointed out that fundamentally the US – China contest was one of economic and political system incompatibility, not so much about which will win, but how the two will co-exist – or not. The focus for business leaders should not be on who is right or wrong, but rather on how these deep structural tensions will evolve and shape business environments in China, in the US and globally.

Dr. Huiyao Henry Wang, Founder and President of Center for China and Globalization, disagreed with the notion that China is taking advantage of the US. Wang argued that China did not converge with western norms, and yet China’s economy had contributed significantly to global growth. China needed a new narrative from the US about China and its place in the world, Wang remarked. The growing distrust between China and the US, he said, now requires improved constant communication between the business community and between both governments.

Today, an excellent government affairs professional should also be a firefighter who fights off corporate crises, a policy analyst who clarifies policies for decision makers within the firm, an adviser who provides great assistance to the senior management, and a fortune teller who foresees and charts pathways for corporation, all four panelists summarized. Most of all, in today’s environment, as the panelists agreed, “We are lubricants to reduce friction and smooth the communication.”