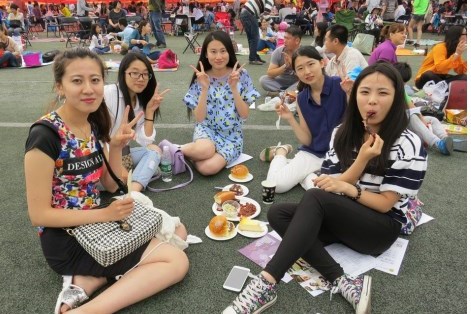 No storm could cloud over the good mood at last Saturday's AmCham Northeast Chapter Annual Summer Music Festival. The tremendous event attracted a diverse crowd of 1,400, including Dalian locals, the expat community, AmCham China members from Shenyang and even an appearance by government officials.

The all-day event, held on the grounds of the Dalian American International School, provided festival goers with great food, live music and a relaxing time with friends and family. The Northeast Chapter Executive Committee worked hard with all 22 vendors to ensure the food was tasty as well as affordable. So the food – from Dalian-area favorites such as Brooklyn Bar, Obsidian, Jayland Products and Café Copenhagen – stayed between a RMB 10-35 range. As a family-friendly event, the festival also included kid-centric activities like a bouncy castle and face painting.

But of course, it was the music that brought the whole day together. Local bands played all day long, even as the overcast weather finally gave in to thunder and rain. An undeterred bunch of festival goers sought shelter under tents and umbrellas to take in the last few minutes of music despite the downpour.

An event of this size would not have been possible without the generous support of the sponsors. Intel, the Shangri-La Hotel Dalian, Dalian American International School, Allied Pickfords and Coca-Cola were some of the corporations who provided immense backing for the event.