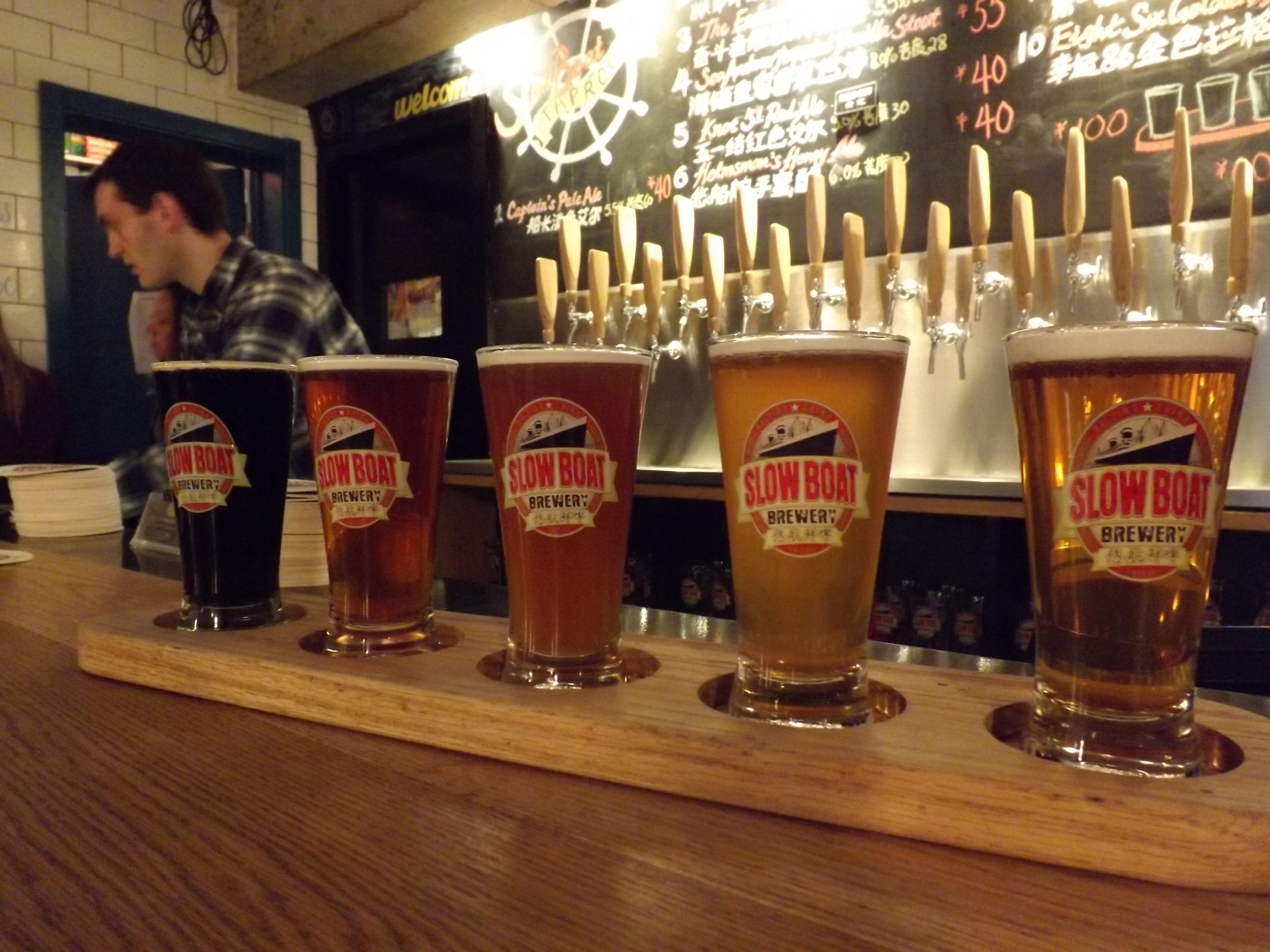 Like all good entrepreneurs in their field, Kris Li and Alex Acker’s business began with giant buckets of beer. The plastic vats crowding their kitchens contained the prototype of the now-thriving Jing A Brewing Co., which is doing brisk business at a newly-opened brewpub in Sanlitun. The buckets-to-brewpub story isn’t unique to Jing A. The biggest craft brewers in Beijing – Great Leap Brewing, Slow Boat Brewery, Jing A and Panda Brew – all began as modest home-brewing projects. These humble origin stories are typical for American-style craft brewing worldwide: homegrown, doggedly devoted to good beer.

American-style craft brewing is having a moment, one that’s spilling over into the Chinese market. In 2013, domestic sales of American craft beer rose 18 percent to $14.3 billion, and export volume grew by 49 percent to an estimated market value of $73 million. While China isn’t a top importer of American craft beers, demand here rose 30 percent over the past year.

Beijing brewers have enjoyed a spike in attention, too. New ones continue to pop up, a magazine (Hops) just launched that is dedicated to beer in China, and Beijing is now home to multiple craft beer festivals, including this month’s inaugural Invitational Craft Beer Festival from Nov. 14 to 16, hosted by Great Leap.

But perhaps unlike their fellow brewers in the US, Beijing’s beer hands have had the space to grow at an unprecedented rate, thanks to increasing Chinese interest in artisanal beer. Jing A went from making batches for friends’ birthdays to setting up a commercial-level system in about a year. Chinese-owned Panda Brewery, in a span of just 18 months, expanded from a hole-in-the-wall hutong spot, more micro than brewery, to a three-story brewpub near Beixinqiao, the brand’s fourth outfit in its Dongcheng domain. Chinese drinkers are now beginning to account for the majority of sales in these breweries, after expats gave them the initial push. That’s a promising sign that this could be a lasting trend, as China is already the biggest beer market in the world by volume, overtaking the US in 2002, according to Euromonitor.

“There’s a substantial Chinese beer nerd population,” said Jing A Cofounder Li. “We’re selling as much beer as we can make.”

The growing number of middle-class Chinese consumers creates a wonderfully large market for these businesses. However, Beijing brewers must overcome sourcing and legal obstacles to succeed on a larger scale. Beer makers in China can legally operate as boutique breweries or as major distributors. The space between, one that many of these small businesses covet – is still uncertain. With interested investors and eager drinkers supporting them, though, these small businesses are willing to risk the unknown to grab their position in the regional market. Those who have poured their hearts into gaining a stake on this totally untapped market are just beginning to reap the benefits.

Build your own beer

Before 2010, the idea of starting a micro-brewery in Beijing was considered crazy, insane, laughable – but in retrospect, genius.

“The culinary culture in China lends itself to alcohol, so I asked myself, ‘Why is the beer here so boring?’” said Great Leap Cofounder Carl Setzer, who was the first mover in that “crazy” stage.

Setzer, an American, together with Chinese partner Liu Fang, founded Great Leap in 2010. First to break into the Beijing market, they also were the first to deal with the hurdles. One of the initial difficulties a fledgling brewer in Beijing runs into is infrastructure. Ingredients that are easily available in more developed beer markets are elusive here; many brewers must import their hops, yeast, and malts. Setzer and Liu recalled flopping down in a pile of grains in a moment of exhaustion at the end of one ingredient-sourcing trip.

Obtaining the equipment to start a brewery is also easier said than done, requiring a do-it-yourself setup. Chandler Jurinka of Slow Boat, which started in late 2012, noted that importing equipment proved impossible; they had to buy and assemble it piecemeal.

Even if a brewing team takes care of its own infrastructure issues, there is no guarantee that the bars stocking them can serve the beer properly. One brewer recalled getting poor customer feedback about sour pours of their brews, only to find out the bar in question hadn’t been refrigerating their kegs, a must for preserving flavor. The staff simply didn’t know this was necessary. Many breweries had to keep distribution small in order to control quality and reputation.

US craft brewers have faced the same problem. Francesco Sirna, managing director of QI Brews, helps US craft beers sell their products in China, and solved this quality control problem by finding a local craft brewer, Panda, to carry the imported beers.

“They apply the same demanding standards to the handling and sale of the beer they import as they do of the beer they brew,” Sirna said. “They’re committed to the development of craft beer in China, whether locally produced or imported.”

Craft brewers are, at heart, perfectionists. So it comes as no surprise that the most prominent brewers in Beijing, like Panda, have opened up their own establishments, the ultimate quality-control measure. Great Leap started with a hutong bar nearby Nanluoguxiang in Dongcheng district. Last year, they significantly upped the ante with a game-changing, 500-square-meter brewpub in the expat-heavy corridor of Xin Zhonglu in Sanlitun. They’ll open a third branch, also in Sanlitun, this fall.

Great Leap continues to operate at the edge of what this niche industry can be. The gastropub model is working well so far, but where they’ll venture next is something all Beijing brewers, and potential investors, are asking about.

Between boutique and Budweiser

In many ways, the business climate in Beijing is what allows small breweries to thrive, yet it’s also what’s holding them back. Enterprising artisans can produce small batches, sell them around town for a nice markup – a third higher than they could in the US, one brewer estimated – and sustain the business from a very early stage. Jing A, for example, profited for more than a year setting up shop at events like Chi Fan for Charity before it opened the doors to the brand’s own brewpub this September.

“There are even breweries smaller than us that still seem to make money,” Acker said. “The real challenge is making the leap from brewpub scale to something else.”

The move from small to medium-sized enterprise doesn’t have a strong precedence for craft brewers in China. Beer manufacturers in China can legally brew as part of a restaurant (hence the brewpubs) or as commercial bottling operations like Qingdao. Where a craft brewer could fit in somewhere between those two extremes remains undetermined.

Jurinka said when Slow Boat began selling its beer, the government “didn’t know what to do with us.” There was nothing between boutique brewing and Budweiser-level production.

“When we started, they didn’t have a concept of what a microbrewery was,” he said. “This led to a lot of problems because they were holding us up to the same standards as large distributors.”

Under guidelines issued by the National Development and Reform Design Commission, breweries can’t legally bottle beer unless they can produce 12,000 bottles per hour, or about 4,000 liters. That’s a far cry from the capacity of Beijing’s craft brewers. Jing A does 4,000 liters in a month.

Those craft breweries that do bottle their beer, such as Slow Boat and Chinese-owned Panda, must hire a large distributor to do it for them or have their beer bottled outside the country. This comes with major quality control risks – a painful tradeoff for craft brewers. The benefit, however, is that the brand can get its name out past the borders of its pubs. Panda has gained new distribution channels by shipping cases of its beer to bars as far out as Xinjiang and Inner Mongolia.

“We believe that the brewpub business and bottling business are equally important for us,” said Panda Cofounder Pan Dinghao. “The brewpub can educate our customers about craft brewing, and the bottled beer can expand our market size a lot.”

This ambition to expand in a wide-open market may also be another defining characteristic of craft brewers operating in China as opposed to their American-based counterparts. The drive to create good pours is matched only by the motivation to grow, grow, grow, even after they bump into this legal barrier.

Investors present one way for craft brewers in China to bridge the legal crevasse. The meticulousness owners poured into selecting ingredients now guides them in their choices of investors. While most of these breweries are expanding, scale is still of great importance. If breweries become too large they end up making sacrifices on quality for quantity, which goes against the grain of most diehard brewers.

Pan of Panda said that most of their investors, so far, have been friends and family. But they’re actively seeking investors, and the two founders, Pan and Xia Yu, will hit the roads of America this month to speak with industry experts.

“Friends say we’re growing too fast, investors want us to slow down a little” said Xia. “But we feel the whole market pushing us.”

Indeed, Sirna, who partners with Panda on imports, then added the caveat that they will “not go big until they can ensure quality.”

Of the craft brewers AmCham China spoke with for this story, all remarked on the appeal of the wide-open market, which allows each to focus on quality, rather than competition or guessing what consumers might want.

“Our primary rule is we only brew beer we would want to drink,” Acker said. “We don’t do market research and plan what beer people are wanting, because they don’t know.”

US craft brewers, while enjoying domestic success, are also looking to the Chinese market. Kentucky Ale, part of the larger multinational Alltech, an AmCham China member company, now sells all of its beers, from light beers to coffee stouts aged in bourbon barrels, to the Chinese market. In three years, they’ve jumped from 30 distributors to 150.

“We’ve not even scratched the surface in first-tier markets, but it starts to blow your mind a little when you think about the opportunities in the second-tier markets,” Brand Ambassador Patrick Lin said. The growth of local brewers excites Lin, too. He recalled seeing mostly Belgian and German beers before this recent uptick in interest. “That’s awesome for us because the market is so big. The more the merrier.”

Some Beijing-based brewers agreed that the rising tide of craft beer lifts all brewers and that growth projections offer heady prospects for many players. Slow Boat, for example, expects business will grow 400 percent this year, and even more in 2015.

“As far as where we are now in China, if the US is at the embryonic stage of (craft brewery) development, we are 10 digits behind the decimal,” Jurinka said. “There is going to be so much growth. Just hold on for the ride.”