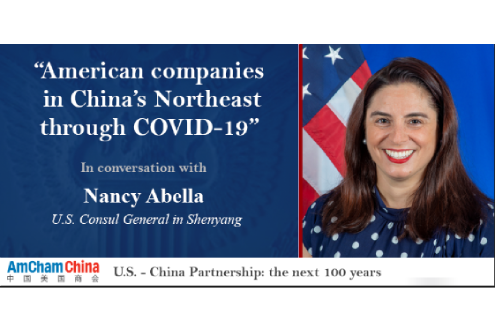 CG Abella updated the community on the Consulate's latest activities and the services that remain available for companies operating in China. The Consul General gave an in-depth overview and chronology of the situation in China and the N.E. region, including the status of the different consulates in China.  She also stressed that although Liaoning has been reporting very low numbers regarding the virus, people should remain vigilant and keep up with the practices that helped prevent the spread to begin with.  She also spoke directly to the threat of potential discrimination and advised people to be aware and proactive when encountering any such behavior.

The Consul General answered questions that had been sent in advance and followed by inviting questions from participants.

One of the questions was in regards to returning expats, specifically that many (in this case Americans) were reluctant or unwilling to come back to China due to the difficulties they face here and what can be done to mitigate the long-term impact of the Covid-19 and the potential harm it may have on recruiting and retaining foreign employees, in particular families, in the future.

Another question was asked regarding the quarantine requirements both in the US and China.  The CG clarified that the recent email sent by the Beijing ACS group, was purposely broad and intended to inform Americans traveling to China to be prepared for quarantine measures, which may include being forced to go to a government managed facility.  This was meant to be a worst-case scenario and not characterize the situation in all cities.  She also emphasized that it is always best to check with local government agencies regarding current regulations.  She also explained the significance of China’s decision to keep its borders open to everyone, with arrival screening and quarantine, despite the possibility of reopening itself to the virus.

The Consular Section Chief explained that visa requests are being processed only for those few applicants who meet criteria in the recent Presidential Proclamation on travel from areas affected by the coronavirus, mostly immediate family members of U.S. citizens or lawful permanent residents.  Those applicants who are eligible to apply should follow procedures on the visa appointment website.  General questions can be sent to the email ShenyangNIV@state.gov.  The Section Chief also gave an update on the current status of the Shenyang Consulate and their new location, that it is up and operating.

The Moderator, AmCham Northeast China Chair Ladon Ghalili, thanked everyone and announced the upcoming Conference call with the Dalian and Jinpu District local officials on Friday, March 11, at 9:30 am.