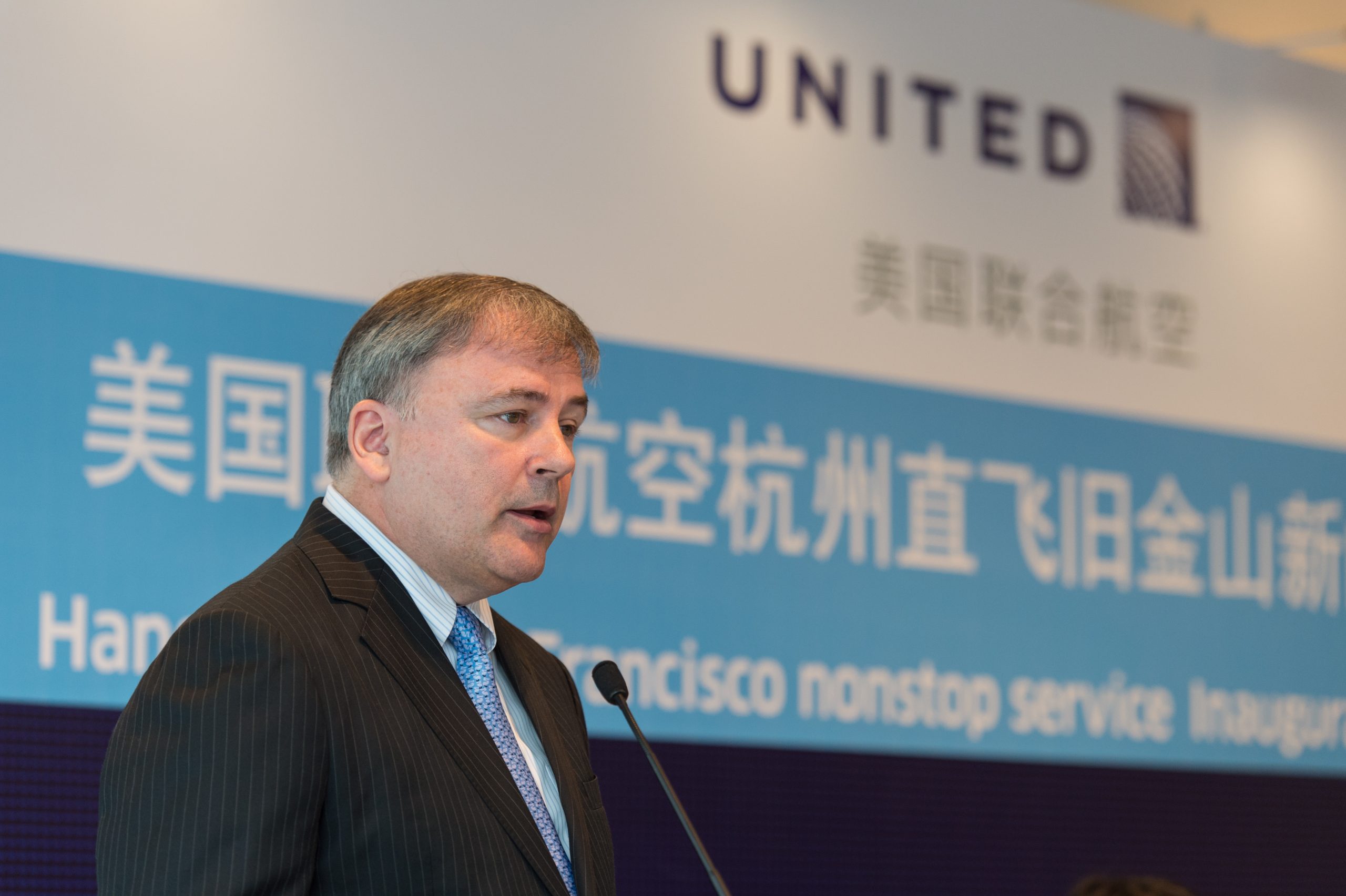 2020 has been a year of unprecedented difficulty for the airline industry as the coronavirus pandemic has brought international travel to a standstill. Passenger traffic for the year is forecast to decline 66%, according to the International Air Transport Association (IATA).

Yet for United Airlines, there are many reasons for a sanguine long-term outlook, especially when it comes to US-China routes. For one thing, air travel between the US and China, which had been completely suspended between early February and June, is gradually resuming. In July, United resumed China flights with a twice-weekly San Francisco to Shanghai service, including a stop in Seoul for a crew change. On October 21, United resumed non-stop service between San Francisco and Shanghai, operating four times a week.

“It's really an unprecedented situation with flights being suspended for months on end,” says Walter Dias, Managing Director of Greater China and Korea – Sales for United Airlines. “And now we’re starting to see some reopening of the flights and through the regulatory bodies starting the flights back up.”

Since United is operating at roughly just 5 to 6% of 2019's capacity between the US and China, the situation is unusually challenging. However, strong business, tourism, and cultural links between the US and China, as well as United’s longstanding presence in the China market, provide the Chicago-based airline with a strong foundation from which to build as the air travel market slowly recovers.

Prior to the pandemic, United had the largest China network in the marketplace with roughly 90 weekly flights. Those included four different gateways from Beijing into the United States, including San Francisco, Chicago, Newark/New York, and Washington DC. United was the first airline to offer the Washington connection as well as non-Tier 1 city service in China with the launch of its Chengdu-San Francisco flight in 2014.

One bright spot for United amid the pandemic has been its cargo flights to China. United was one of the first airlines to begin operating US-China cargo charters by using passenger airplanes. There are currently 33 such cargo flights a week from the US to Beijing, Shanghai, and Chengdu. Previously, United operated no cargo-only flights.

“People don’t realize a lot of cargo travels below the seats, so all that capacity went away” as passenger demand plummeted amid the pandemic, Dias notes. “So, there was the unique situation of cargo getting stuck in China or the US.”

“We’ve been very happy to be able to take our passenger aircrafts and convert them to cargo-only charters at this time,” Dias says. “That’s also helped the industry to lower the amount of cash burn that the airlines are experiencing.”

United has built up its China presence over many years, beginning with a Hong Kong-Seattle flight in 1983. The airline has “a fabulous team in China with decades and decades of experience” that covers the entire country and has built robust relationships with corporate customers, travel agencies, and tourism offices  in the United States, Dias says. That has helped United to develop close relationships with the US destinations that have a link to China.

Air China, United’s Star Alliance partner, is one of the US airline’s most important relations in China. United and Air China work together to develop reciprocal frequent flier program initiatives and offerings within the marketplace.

Sports-related travel from China to the US is an important niche market for United, says Nancy Lyu, the company's Director of Sales for Beijing and North China. United and its travel agent offer itineraries that include at least one NBA or golf game (United is a PGA sponsor). Some tours are dedicated to golf. Younger Chinese are also interested in baseball and American football.

Because of Yao Ming’s success as a star player for the Houston Rockets, United saw demand for flights from China to Houston – one of United's US hubs – pick up in the mid-2000s. “We were very close with Yao Ming when he was a Rocket, and that would drive a lot of traffic amazingly, for people to go watch basketball games,” creating new passengers and even boosting demand among current customers, Dias says.

Winter sports are another reason Chinese tourists visit the US. With Beijing hosting the 2022 Winter Olympics, more Chinese are taking an interest in skiing. China had just 5 million skiers in 2017, but hopes to see that number grow exponentially over the next decade.

Large ski resorts like Vail and Aspen in Colorado are attracting a growing number of Chinese skiers. Vail sells a season pass that is popular with Chinese skiers, says Lyu. “And also, we bring media and travel trade partners to Colorado and let them experience winter sports and share their experiences with Chinese consumers.”

At the same time, United has refined its in-flight offerings to suit the needs and tastes of Chinese customers. “We have to be China-centric when we’re operating in the China-US market,” Dias says. In practice, that includes everything from having Chinese-speaking flight attendants and Chinese-language in-flight entertainment to offering meals appetizing to a Chinese palate.

United has also developed a WeChat promotional channel to stay connected with its Chinese customers on China’s preeminent super app. WeChat has about 1.2 billion monthly active users, the vast majority in China.

“We do see the travel market in China being much more mobile centric than other markets. And so, you have to really pay attention to your mobile offerings,” Dias says.

Amid the worst pandemic in a century and the first to strike in the era of modern aviation, the airline industry is investing heavily in disinfection and other disease control measures. United has been a leader among US airlines in these areas. It was the first US airline to require flight attendants to wear masks, soon following with all customers and employees. United was also among the first US carriers to announce it would refuse service to customers who did not wear a face mask. United was also the first US airline to launch touchless check-in for customers with bags, and the first to require passengers take an online health assessment before traveling.

“From our perspective going forward, this is an unprecedented challenge for the entire travel industry with the COVID-19 outbreak, so one of the things that we all have to do over the next 12-24 months is make people feel safe and comfortable about getting on airplanes again,” Dias says.

“As the public begins to adjust to a world that’s been altered by the COVID-19 pandemic, health and safety is of the utmost importance,” Tomislav Mihaljevic, MD, Cleveland Clinic CEO and President, said in a statement. “It’s important for everyone to take precautions as we enter this new phase of COVID-19 response.”

As part of the UnitedClean Plus policy, in airport lobbies, United is temporarily shutting down self-service kiosks and replacing them with touchless kiosks that allow customers to print bag tags by scanning a QR code, promoting social distancing to reduce contact between agents and customers, and deploying sneeze guards at key interaction points.

At the gate, United is boarding fewer customers at a time to allow for more distance during the boarding process, asking customers to self-scan their boarding passes at gate readers, and providing employees disinfecting products to be used on high-touch areas like armrests and handrails.

Onboard aircraft, United is enhancing cabin sanitization. In June, it began using electrostatic spraying before every flight. All employees and passengers onboard must wear a mask or face covering. As they board, customers receive individually wrapped hand sanitizer wipes to customers as they board. Additionally, customers are offered alternative flights when United expects a flight to operate at more than 70% capacity. Further, United is implementing employee temperature checks before the start of their workday.

Returning to the Skies

As of October, China and some other countries in the Asia-Pacific region have managed to get the pandemic under control, but elsewhere in the world infection rates are still ticking upwards. The implacable nature of the virus makes forecasting an end to the pandemic – and a revival of international air travel – difficult, to say the least.

China's experience may be instructive though. “China is ahead of the curve on this piece of the recovery, because China was the first one into the crisis and the first one out of it,” Dias says. He notes that China’s domestic aviation sector has recovered swiftly, reaching 80% of its 2019 capacity by September and is expected to be back to 100% capacity and volume by year-end.

“That’s very encouraging, because I’d use China as a proxy for how the US market will react once the outbreak is under control in the US,” he adds.

In April, China surpassed the US to become the world’s largest aviation market, fulfilling a long-anticipated prediction earlier than expected. IATA had forecast China would become the world's aviation market by seats in 2024. The US may still recover the top spot temporarily once the pandemic ebbs, but likely not for long.

Regardless, together the US and China will be the world’s two largest aviation markets for the foreseeable future. For United Airlines, based in the US and with a large presence in China, that presents a plethora of opportunities.

In 2019, 2.83 million Chinese visited the United States, making China the US’s fifth-largest source of foreign visitors. Chinese visitors to America spend on average US$6,700 during their stay, well above the US$4,200 spent by the typical visitor from overseas.

China’s vast size means that there is plenty of room for growth. “Nearly three million visitors from China to the US – for any other market that would be considered mature. But, we’re still scratching the surface, I believe,” Dias says.

United is also well positioned for a recovery in air travel demand because its pilots agreed to reduced pay to preserve all their jobs through June 2021. That arrangement will allow United to rebound more swiftly than if it had to rehire and retrain its pilots.

Additionally, since the pandemic began, United has raised more than US$22 billion, and the company’s total available liquidity at the end of the third quarter 2020 was approximately $19.4 billion.

As long-haul air travel gradually returns, United Airlines will be looking to capitalize on the unique strengths of the Boeing 787, of which United was the launch customer in North America. That aircraft “really broke the chain between big and long, and now you can fly small and long with the 787,” Dias says. As a result, routes like Chengdu-San Francisco nonstop are now feasible.

And that’s just the tip of the iceberg. China has 16 secondary (“New Tier 1”) cities including Chengdu. Dias expects that as China's aviation market continues to grow, there will be more nonstop service from its secondary cities to destinations worldwide.

He also believes that the US will remain a destination of enduring attraction for Chinese customers. “The unique thing about having the United sales team in China is that we’re out there selling United Airlines. But at the same time, we’re also ambassadors for the US, and really promoting these destinations or experiences that are unique to the US.”

He concludes: “And that’s one of the reasons I’m still optimistic that the numbers will continue to grow in the long term despite the industry is facing tough challenges right now, just because there are so many unique things that America has to offer.”