What’s on the ’Horizon’ for new Chinese Art? 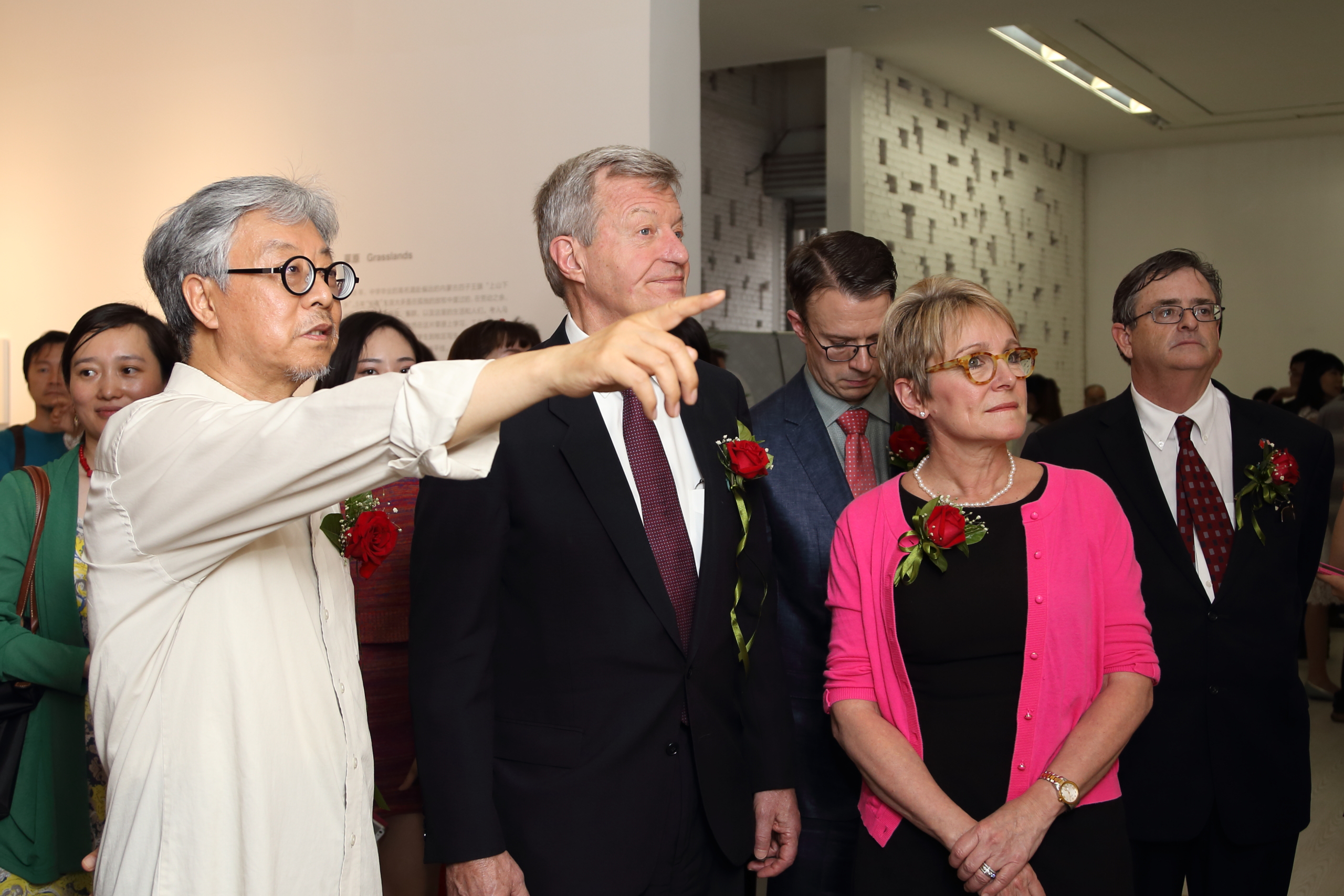 Art Curator Gao Minglu helped put Chinese contemporary art on the map. Before his seminal exhibitions, the global art scene knew little of what China’s artists had to offer. For the first time, he shared his own art this summer: paintings and life drawings he created during and just after the Cultural Revolution (1966-76). Co-sponsored by AmCham China, The Lonely Horizon – Gao Minglu during the 1970s shares landscapes and portraits from Gao’s time in the grasslands of Inner Mongolia, Tibet and other remote regions.

In the four decades since he first created the art, Gao has moved across the world to study, teach and curate. As a result, much of the artwork had been sitting in friends’ garages or tucked into Gao’s belongings for the better part of the last 40 years, and only uncovered by accident in recent years.

Those in attendance at the June 16 opening party, including world-renowned artist Xu Bing and US Ambassador to China Max Baucus, exemplify the bridge Gao represents: between China and the US, artist and establishment, 1970s and today.

Contemporary art is big business for both Chinese investors and Chinese artists, paricularly over the last decade. The last record-setting auction came in 2013 as Zeng Fanzhi’s The Last Supper sold for $23.3 million.

In an exclusive interview with Business Now, Gao remarks that the commercialization of Chinese contemporary art has also presented challenges to his own academic work. Gao first left China in the early 1990s to study art in the US, earning his Ph.D. from Harvard and taking on his current professorship at the University of Pittsburgh.

Gao’s career has been deeply shaped by the political and market forces around him. He sees the works in The Lonely Horizon as documentation of that moment in his life, and in the lives of many Chinese.

“I see them not only as artwork, but also as true feelings about that age, that society, that time,” Gao says. “Friends, family and students all encouraged me to bring that to the public to show that.”

Like many his age, Gao was sent away from his hometown of Tianjin during the Cultural Revolution. He spent five years in the grasslands of Inner Mongolia, teaching art.

He documented the time in journals, sketches and paintings. Many journal pages and portraits from this period depict Gao’s students, the rosy-cheeked faces of China’s windswept West. Gao says his work contrasted the popular art during this period in both theme and scale.

“During the Cultural Revolution you have paintings of soldiers and workers, always a large composition, but what I did is very small, just life drawings or landscape – nothing to do with this revolution,” he says. “I travelled facing myself and my own heart and my own eye, nothing really outside.”

The paintings that make up Gao’s exhibition are mostly pulled from a period of cultural isolation. Gao didn’t paint much after this time, and he said he never thought the paintings would be shown in public.

“At that time I felt that I am just an individual, just a teacher, and I would do my best, but I had nothing to do with the outside world,” Gao says.

The last painting Gao did dates to 1983, a landscape from Gansu province that his wife found a few years ago in one of his old paint sets. The early ’80s marked an important shift for China, and one for Gao as well.

Gao studied at the Chinese National Academy of Arts and began to very actively engage with the world around him especially the emerging avant-garde art scene.

While speaking in his minimalist Wangjing apartment, Gao points to a weathered table in the corner of the kitchen, saying it was the place where his most dynamic conversations with artists took place 30 years ago as he collaborated with them as critic and curator.

“I wanted to be involved in this, even to change something, as curator,” Gao says. “The age changed (to) idealism.”

Gao put together an exhibition of 300 pieces of contemporary art for the National Art Gallery. The year was 1989, and while it was still months before the student demonstrations, Gao recalls it as a sensitive moment. The exhibition opened on Feb. 5, and closed later that day when authorities clamped down after an artist fired a gun in the gallery as part of one performance piece.

The exhibition, and its premature closing, led to a sensational story in the New York Times. Gao keeps a clipping of the issue. He recalls that there were many news reporters at the opening, but no writers from art journals. “They still didn’t know what was happening in China,” he says.

The later days of 1989 tested Gao’s idealism. He was not allowed to write, publish, travel or give lectures. Instead he was to stay home and study Marxism. He did stay home, though he chose to study other topics. These academic pursuits led to an invitation to study in the US.

“I never thought I wanted to go abroad because I thought it was important that I stay together with the artists,” he says. “But on the other hand, I knew that (art) theory in China needed to be developed with international academics.”

While in the US, Gao worked to get the names of Chinese contemporary artists out into the world, and in 1998 curated Inside/Out, which focused solely on late 20th-century artists from China, Taiwan and Hong Kong. The show traveled across the US, appearing at New York’s P.S.1 and San Francisco’s Asian Art Museum, among other venues. Gao wanted Western audiences to understand Chinese contemporary art, both visually and conceptually.

“After Inside/Out, there was more dialogue between American universities and museums in China,” Gao says.

At the Lonely Horizon opening celebration, AmCham China Chairman James Zimmerman commented on the parallels between the West opening up to Chinese art and the warming of relations between the two regions.

“Art can be a bridge to connect people from different cultural backgrounds, and that is why this event is important for American business here in China,” Zimmerman says. “Gao’s time in both China and the US has allowed both of our countries and our people to grow closer together.”

In the first decade of the 21st century, Chinese contemporary art became big business. Each auction seemed to bring a new tianjia, or “heavenly price.” Criticisms have also risen about the commercial and materialistic side of new Chinese artists. Who don’t have the rebellious, political streak that united their predecessors.

Gao says the commercial bubble affects his academic work, too. Getting Chinese galleries to agree to do exhibitions for purely scholarly or academic purposes proves difficult.

With the rise of private collectors, more private galleries have sprouted up in cities like Shanghai. For them, Gao says, the collection is about capitalism, with artwork sitting like money in a bank. He contrasts this with institutions in the West such as the Guggenheim, which takes a purely academic approach to its collection and exhibitions.

“I hope that gradually we will reach this level,” Gao says. “But I believe that the current stage is transitioning.”