Winning with Our Members – in China and for China 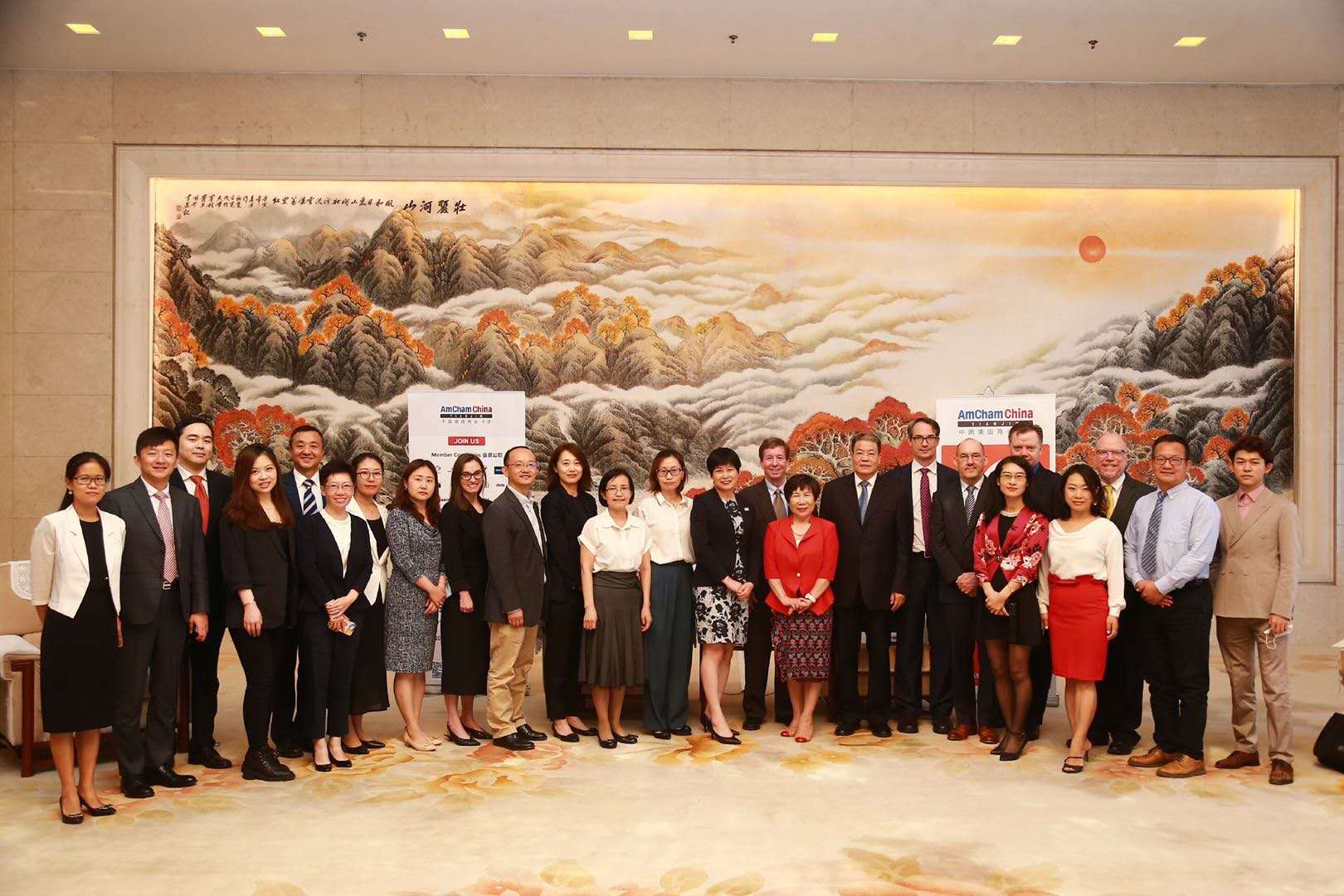 2020 has seen an unprecedented public health crisis that continues to threaten the global economy, with key supply chain centers from multinational companies deeply rooted in China among the first to be impacted. China may have been the first hit by the epidemic, but is the only leading economy in the world expected to produce positive GDP growth this year.

Through the battles together against COVID-19, from going above and beyond to source PPE, donating funds to emergency medical operations, working from home over the long days and nights of the lockdown, and coordinating all the details to reopen factories and corporate workplaces, AmCham China’s member companies have demonstrated what “in China, for China” meant for themselves and for their customers.

As we mark the People’s Republic of China’s 71st National Day, AmCham China would like to further reiterate our commitment as an organization that supports China’s economic accomplishments by promoting the win-win business outcomes achieved by our members across all parts of China.

Even before the pandemic was fully contained domestically, reopening the market became a priority second only to disease control. In addition to working closely with China’s central government agencies, our work with provinces and municipalities where we have offices and long-term partnerships played important roles in developing work resumption solutions, bringing expatriate executives stuck abroad back to China, and communicating the policy, regulatory, and business issues needed for rebuilding market confidence.

Continuing to be the leading advocate for our member companies, AmCham China leaders went on the road as soon as travel options reopened and delivered a series of thoughtful and result-driven engagements with local government officials, both helping our members to recover business for 2020 and supporting innovative growth for the future.

On August 20, Greg Gilligan, Chairman of AmCham China, met with Vice Mayor Jin Xiangjun for our annual business climate dialogue with the city

On August 20, Greg Gilligan, Chairman of AmCham China, in his meeting with Tianjin Vice Mayor Jin Xiangjun, thanked the city for taking tremendous responsibility for serving as a first port-of-entry and quarantine site for many inbound international flights, especially for those expatriate residents returning to Beijing. Alan Beebe, President of AmCham China, also praised the city’s efforts, saying that “It’s not just AmCham China’s members that owe Tianjin much gratitude, but the entire foreign business community in Beijing.”  More than 40 companies visited Tianjin on this trip, marking it as one of AmCham China’s largest trade delegations.

During this trip, Michael Hart, AmCham China’s Tianjin Chapter Executive Committee chair, and senior officials of the Tianjin Municipal Health Security Administration cohosted a dialogue between the agency and members of the Chamber’s Healthcare Industry Forum on a number of regulatory and reform issues concerning Tianjin’s plan to implement one of China’s most important healthcare access agendas, the volume-based procurement policy pilot of medical devices. This was the third consecutive quarterly get-together the working group had held with this Tianjin administration.

In August, AmCham China also announced major partnership agreements with two of China’s top national development areas, including renewing its fourth annual Corporate Partner Program agreement with the Tianjin Economic and Technological Development Area (TEDA), and kicking off the first year of a similar partnership with the Beijing Economic-Technological Development Area (BDA). While AmCham China meets with many local government representatives every year, these partnership agreements are designed to serve as long-term vehicles that facilitate dialogue and help our member companies advance their local projects, communicate operational issues, and broaden access to services these development areas offer.

As part of a result-focused advocacy approach, AmCham China has built these critical partnerships with local governments in the hope that they deliver concrete examples that underpin our member companies’ “in China, for China” strategies. TEDA and BDA are key pillars of two of China’s free trade experimental zones in Tianjin and Beijing, focusing respectively on upgrading Tianjin to the largest high-end manufacturing center in northern China, and connecting high-end manufacturing activities to advanced service trade, a mandate given to the newly announced Beijing Free Trade Experimental Zone.

In his conversations with Greg Gilligan and AmCham China member companies, BDA Party Secretary Wang Shaofeng noted that, “While the economy is global, production is local. With 270,000 employees and 180,000 residents, BDA has offered an assuring health record of zero COVID-19 cases throughout the year. This makes BDA the safest manufacturing hub for the global supply chain.” The two leaders also agreed that the partnership between AmCham China and BDA added a necessary piece to AmCham China’s relationship with the nation’s capital, where many of our members reside.

On September 25, Alan Beebe, President of AmCham China, spoke with members, government partners, and staff at a Chinese National Day reception in Wuhan he hosted together with Steve Carpenter, Chair of AmCham China’s Central China Chapter

Hubei is without any doubt the local market in China that has been hit the most severely by the COVID-19 pandemic. Despite all the challenges, AmCham China’s Central China Chapter Office in Wuhan, together with our other offices in Beijing, Tianjin, and the Northeast, worked to help our member companies source PPE and resume business, leaving a tremendous, but enduring, mark on the long days and nights of the lockdown.

In as early as April, when Hubei and Wuhan reopened for work and outside transportation, the AmCham China leadership held an online meeting with our Hubei Vice Governor Zhao Haishan, pledging to him and his team that the Chamber would help Hubei and Wuhan rebuild confidence amongst our member companies, and help get Hubei back on track as a critical global supply chain center for some of our largest membership clusters, including equipment manufacturing, technology and innovation, healthcare, and food and agriculture.

On September 25, together with our Central China Chapter Executive Committee Chair Steve Carpenter, Alan Beebe, President of AmCham China hosted a National Day Reception for our members and government representatives in Wuhan, commemorating their remarkable fight against the pandemic.  With much emotion and warmth, Beebe commented, “This is the first in-person gathering we have held in Wuhan this year. We wanted to come together, but not, on this occasion, to talk about business. We know our members and government friends fought a formidable battle here and we simply wanted to come and see everyone, and to thank you for your support of AmCham China.  We are deeply touched by the hard work of our Wuhan Office staff Joan and Lina, as well as by the 20,000 masks sent to our Beijing Office by the Hubei Provincial Department of Commerce. With all the challenges we have dealt with in 2020 and the courage to overcome them, we wish China a Happy 71st Birthday in this particularly remarkable year!” This visit also laid the groundwork for a larger membership visit to Hubei later this year to help the province reload its FDI growth and its vibrant market.

The leaders had a very candid exchange about the challenges faced by American businesses with the double hit by the pandemic and the turbulent US-China relationship. Gilligan encouraged Shandong to help ensure that Chinese policymakers have open dialogues with American businesses, allowing the firms to speak to the true problems about their operations in China, broadening the access by Chinese government beyond merely regulatory discussions to FDI’s demand for market access and reform, and thus ensuring that the business climate keeps improving. Gilligan emphasized that, in order to support the Chinese government to come to that level of openness, AmCham China, as an independent business organization that does not represent the view of any government entity in China or the US, looks forward to continuing to play the role of bridge between the two sides through reciprocal learning.

Headquartered in Beijing, AmCham China also has three chapters in Tianjin, Central China, and Northeast China, with offices in Tianjin, Wuhan, Dalian and Shenyang. In addition, AmCham China also has a long-term MOU with the Shandong Provincial Department of Commerce signed in 2018, facilitating regular in-depth dialogues with the province and setting a goal to establish a Shandong Chapter. Since 2015 and 2020 respectively, the Tianjin Economic and Technological Development Area (TEDA) and the Beijing Economic-Technological Development Area (BDA) entered annual Corporate Partnership Program agreements with AmCham China. To learn more about AmCham China’s local operations, engagement, and partnerships, contact Henri Tan, Senior Director of Member Operations and General Manager of Chapters at htan@amchamchina.org and Connie Zhao, Associate Director of Member Operations, at czhao@amchamchina.org.