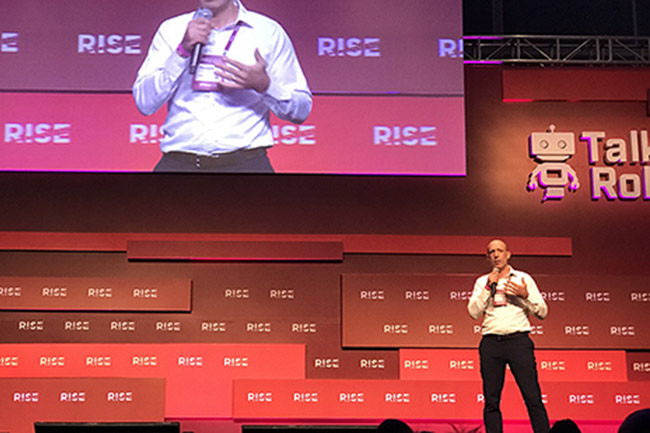 A pioneer during the dot com era, Richard Robinson has been living in China for over 22 years. Robinson’s eye for promising tech companies has found him leading three such startups to IPO, as well as many more in which he’s acted as an adviser, mentor, or angel investor. Now, Robinson has moved to the “dark side” as he calls it, as one of the founding partners of nHack Ventures, a cross border venture capital investing firm that works to bring Nordic businesses to China and Asia. Robinson and nHack take a unique approach to their investing, placing heavy emphasis on a customer-centric strategy underpinned by quick speed to market.

To explain his journey from serial entrepreneur to venture capitalist, Robinson gave us a peak into how he and nHack came to be in China, and what’s on the horizon for VC between the Nordics, the Middle Kingdom, and the rest of the world.

You’ve lived and worked in China for over 20 years now, working with startups in the tech space. What put you ahead of the curve in coming to the China market when you did?

I first came to China overland from the Swiss Alps to Hong Kong via the Trans-Siberian train in 1993. I arrived into Beijing and the Dragon swooped down and dug her talons into me and hasn't let go since! I just felt that China was the biggest story of our lives, with the rural to urban migration and increase in GDP per capita.

I then got an International MBA in the Netherlands at the Rotterdam School of Management at Erasmus University and while I was there from 1994-1996, I fell in love with the ‘interwebs’ and, after a solo 5,000 km mountain bike through Africa, I moved here in late 1996 to be an internet guy in China. But I'd neglected the fact that there were more people online in Hong Kong than all of the mainland, so I spent four years in Hong Kong, and have been in Beijing for the past 18 years.

During these 22 years, I've been part of eight startups from early on: three times as an executive in private companies that then went public, five times as a founder with three exiting to publicly-listed companies, a fourth in the 'L' column, and a fifth still limping along.

Can you tell me about some of the companies you’ve worked in/advised/exited that were great successes for you in China? Some that illustrated the difficulties in doing business here?

Some have been more successful than others for sure, and the thing to remember is that the default setting for startup companies is indeed failure coupled with a very non-sexy daily grind (despite the media narrative). And by failure, I mean total, all-encompassing failure with no place to hide, and by a daily grind, I mean one where most founders are overcome with FUD (Fear, Uncertainty and Doubt) rather than passion.

"But other than that, Mrs. Lincoln, how did you like the play?"

So entrepreneurship is just tough, and China adds additional challenges as a foreign entrepreneur, but also, of course, provides incredible scale and opportunities.

How has innovation in China or the ability for innovation to flourish in China stood out to you? What keeps you doing business here, and provides such a platform for success?

For most of my time here, the saying was “B2C, B2B, and C2C (Copy-to-China)”. That copycat phenomenon was more a reflection of the stage of the market, where many of the big ideas were copied from the US, such as “We're the Facebook or eBay or Twitter or Groupon of China.”

These days there's real innovation in the consumer Internet space in China – you can even say there's a CFC (Copy-from-China) phenomenon occurring, where companies like Facebook are copying WeChat features, and bike sharing is getting copied by players like LimeBike in the US.

For most of the past 22 years, I would go to Stockholm or Tokyo or New York City and think, “Wow, China is in the past, this is the future.” A few years ago, however, I felt that China had caught up in many ways. And then recently, it has just accelerated into the future in some areas – such as mobile payments – where China is perhaps a half decade ahead of the next most advanced player in terms of innovation and adoption.

People, products, and processes are all important, but, at its core, a startup has be a savage learning machine: focused, but constantly experimenting, iterating and executing, and then rinse and repeat. It's literally a struggle for existence, and a sense of urgency and focus is critical.

How and why did you transition from being a serial entrepreneur to an investor?

I'd always wanted to be on the other side of the table, and be more of a coach when it came to startups. I just felt that, now that I was on the wrong side of 50, I should harvest my relationships, experience, and skills and use all the scabs, callouses, and scar tissue that I'd accumulated over the decades like a coat of armor, and use that to help guide other companies into battle, if you will.

The customer has to be the most important focus. I have seen startups fall in love with their products and even create a solution looking for a problem, but it doesn't matter unless people want to buy it at scale. YCombinator, a leading accelerator, has succinctly summarized the key to startup success as “make stuff that people want”. It seems almost silly it's so simple, but it's true and supports a customer-centric orientation.

As a founding partner at www.nHack.io, we invest in kickass Nordic/Northern European startups and scaleups, and accelerate them into China and Asia for prototyping and manufacturing, market access, and further funding. There's incredible innovation in that part of the world and, in fact, the Bloomberg Innovation Index has outsized representation from that part of the world.

So, we seek out the most innovative companies where they've mostly already found a product market fit – basically they've gone from ‘Zero to One’, as Peter Thiel outlined in his book – in their home markets, and then we add investment, expertise, and relationships to accelerate from one to 100. Coaching, connecting, cajoling, counseling and cheerleading.

Is there anything that defines a good startup? What is there that indicates a company’s capacity for future success from the outset? What are the elements in a company that let you know that going from 0-1 is possible, let alone 1-100?

People, products, and processes are all important, but, at its core, a startup has be a savage learning machine: focused, but constantly experimenting, iterating and executing, and then rinse and repeat. It's literally a struggle for existence, and a sense of urgency and focus is critical.

What sectors or technologies do you anticipate will have the most disruptive effect on business and industries, whether over the short or the long term?

As Mark Andreessen from Andreessen Horowitz famously said, "Software is eating the world." There are no sectors immune to the disruptive effects of tech and innovation.

What companies or sectors are you focusing on now? Are there any companies you are now invested in or looking to invest in that you’re particularly excited about?

We're looking at companies across a number of sectors including MedTech, AI, Hardware, and Maritime Technology (I have Norwegian business partners!). We're just excited by disruptive innovation coupled with great Nordic design and technology.