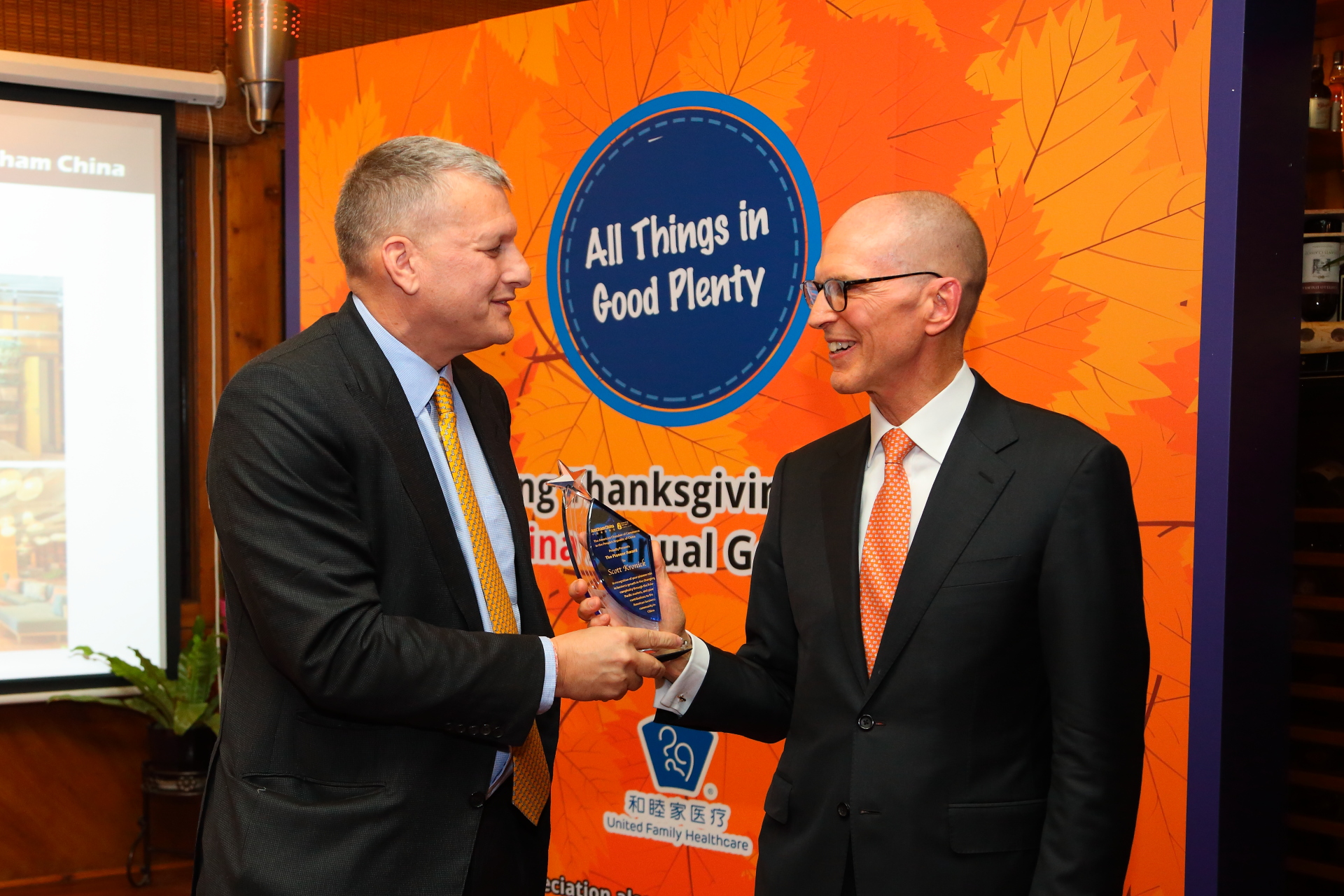 AmCham China is proud to announce the winners of this year’s Awards, which will be officially presented at the Annual General Meeting (AGM) on November 21. This year’s recipients have all shone in their own ways, building bridges through dedication and hard work in the community, despite a challenging time for US-China relations more generally.

The Pioneer Award, which recognizes those who have made significant contributions to the US-China relationship, goes to basketball star Stephon Marbury. Stephon has embodied those principles since arriving here in 2010, both through exemplary leadership on the basketball court, and through a range of entrepreneurial and philanthropic ventures off it. Leading the Beijing Ducks to three CBA titles in four years (2012-15), Stephon is often referred to as Commissar Ma (马政委) due to his role as mentor and coach to his Chinese teammates and youth players. Off the court, he has been involved in a variety of business ventures, and, in 2014, he was named one of the Top 10 Model Citizens for Beijing – the first foreigner to receive this award – due to his commitment to the Beijing community and his charity work.

The Forums & Committees (F&Cs) of the Year Award goes to the Chinese Government Affairs Committee (CGAC), led by Dell’s Zhou Bing and ably supported by Elizabeth Pei (Disney), Julia Zhu (Starbucks), and Dennis Zhang (Honeywell). One of AmCham China’s most active F&Cs, the CGAC strives to communicate with both Chinese central and local governments, advocating on behalf of members, and serving as a think tank for our board. Despite a particularly challenging environment in 2018, the CGAC has helped set the Chamber’s strategy with regards to US-China trade tensions, and was instrumental in arranging an exclusive Dialogue with MOFCOM, among other valued events and trips.

The President’s Award for Advocacy is this year shared between the Automotive Forum and the Financial Services Forum. Headed by GM’s Albert Xie, the Automotive Forum has held bi-monthly meetings with US Government officials to address key industry issues, while also staging the forum’s first networking with Chinese key stakeholders. The forum has also helped sharpen the focus this year on technology trends and policy challenges in the auto industry. Led by Gina Huang (JP Morgan) and supported by Viki Huang (State Street), the Financial Services Forum this year established a regular system for regulatory updates and submitted two sets of comments to the CSRC. Cooperating closely with the Chinese government, the forum has helped to promote more market access and ensure smoother operations for foreign businesses in China.

The President’s Award for Insights has been given to the Customs & Trade Committee. Led by 3M’s Yu Jiang, the Committee has taken several active measures to help AmCham members better deal with challenges in facing the US-China trade dispute, including holding workshops, regulatory updates, and a highly successful White Paper delivery meeting with six government departments, which was attended by more than 20 AmCham China member companies, including Intel, Dell, Amazon, Ford, Starbucks, Coca-Cola, PepsiCo, Danone, Walmart, ExxonMobil, and Mars.

The President’s Award for Membership Development has been given to the Cosmetics & Nutrition Forum. Led by Zhang Jun (Mary Kay) and supported by Jane Yan (Amway) and Edison Chen (Johnson & Johnson), the forum has greatly expanded this year, with four large corporate companies joining our activities. Continuing advocacy has been critical this year and AmCham was able to make its voice heard with key Chinese stakeholders. The forum also organized two separate sub-groups this year, focusing on toxicology and technical regulations, each of which drafted a position paper on a topical issue.

This year’s Service Award goes to Su Cheng Harris-Simpson. An AmCham China member for more than 20 years – and a current board member– Su plays a driving role in two of our signature events, the American Ball and the Women Economy Summit. As chair/co-chair of several F&Cs, including the Entrepreneur Committee, she is actively involved in many of the Chamber’s activities, especially through her devotion to the professional development of women.

All recipients of this year’s Awards – including the Chairman’s Award, which will be revealed on the night – will receive them in person at the chamber’s 37th Annual General Meeting on November 21. To attend the AGM – where you’ll also have a chance to meet prospective candidates for next year’s board of governors – please register here.