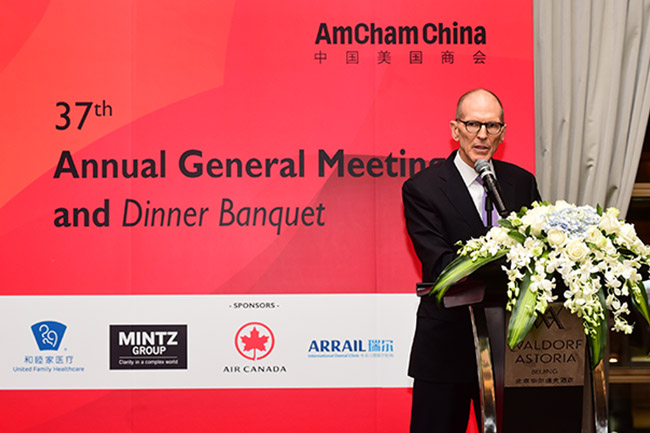 AmCham China’s 37th Annual General Meeting took place on Wednesday night in Beijing at the iconic Waldorf Astoria hotel, site of the Ming Dynasty Xianliang Temple, with a packed house celebrating the achievements of the Chamber in 2018, and honoring those who have made special contributions to the business community this year.

In his headline speech, William Zarit, whose two-year run as Chairman will come to an end next month, talked about the fact that during his tenure AmCham China has been “thrust into the limelight, becoming even more of a focal point for the US-China economic relationship”, a point he demonstrated with the hundreds of mentions that AmCham China has received in top-tier media outlets over the past year.

His time as Chair has also overseen the 20th White Paper in Chamber history, the 50+ meetings that AmCham China representatives has each year in Washington DC with senior officials and business leaders, highlighted by meetings with Peter Navarro, Steve Mnuchin, and Robert Lighthizer. Zarit also summed up the Chamber’s position on several key issues: “We want a level playing field, and an economic relationship based on fairness and reciprocal treatment. The US should work together with its like-minded allies, rather than offend them. We don’t like the tariffs, but the US must focus more on education and R&D to remain competitive.”

Zarit said he looked forward to further strengthening the Chamber’s special partnership with Shandong province, building on two years of hard work, with further announcements expected shortly. He also remarked on one specific achievement, of which he declared himself “especially proud”, that has seen changes to AmCham China’s board election, in order to make the process more professional and effective. These changes include: board members will now be elected for two-year terms, instead of one, to help with continuity and institutional memory; half of the board seats will be up for election every year; and the board will choose the chair and vice chairs to ensure that the Chamber has the right leaders.

Zarit also announced a new cooperative partnership, funded by the US State Department, to implement a series of programs in 2019 using people-to-people public diplomacy dialogues to showcase bilateral collaboration through American businesses in China.

Finally, Zarit stressed that, despite ongoing uncertainties, “the stakes are much too high” for the US and China not to find a way to coexist. But he ended on an upbeat note, saying that before the end of the year he expected to see the beginning of the dawn of finding that new way.

Introducing proceedings at the start of the night, AmCham China President Alan Beebe revealed that the sold-out AGM had the highest attendance in years, with a nearly full contingent of current board members and candidates for next year’s board. Beebe also pointed out two upcoming milestones in 2019: AmCham China will celebrate its 100th year of heritage in China, while next year also marks the 40th anniversary of the establishment of diplomatic relations between the United States and the People’s Republic of China.

In highlighting an unprecedented year of challenges and opportunities, Beebe said that participation is the most valued contribution at AmCham China. “AmCham China is great because of its members. By volunteering their talent, knowledge, and experience, it is our members who make the Chamber tick, who give us the power that we have. This volunteerism is a crucial part of our DNA.”

Beebe also handed out awards in recognition of those that have made very substantial contributions to the Chamber in 2018. These included:

Two other awards were also given out. Former NBA star Stephon Marbury received the Pioneer Award, which recognizes those who have made significant contributions to the US-China relationship, with Stephon embodying those principles both through exemplary leadership on the basketball court, and through a range of entrepreneurial and philanthropic ventures off it.

Speaking ahead of the AGM, Marbury said, “It’s such an honor to be recognized by the American business community here in China. Like many others here, China has truly become a second home to me. Today, more than ever, it’s important to find ways to build bridges between the US and China, and I look forward to continuing that exploration. I officially retired from professional basketball this year, but I plan to stay actively engaged in China both through coaching and through a range of exciting business ventures – and hope to work with as many people in the US-China business community here as possible!”

Meanwhile, AmCham China Vice Chair Eric Hirsch received the Chairman’s Award for his hard work all year. In addition to being a member of several taskforces, he has been very supportive of the Chamber’s outreach to Shandong and Tianjin by involving local teams and inviting clients where possible. He was also instrumental in helping AmCham China negotiate an office move to its new home in Sanlitun, has served as chair of the Real Estate and Development Forum, and supported on the Tech Initiative Hackathon.

There was plenty of other entertainment in addition to all the awards handed out. With AmCham China’s election season in full swing, the vast majority of the 21 candidates running for next year’s Board of Governors took the opportunity to introduce themselves to the membership in a 60-second stump speech, with former Chairman Michael Barbalas appointed as the official timekeeper. Long-time member Randy Phillips, a Co-Chair of the US Government Relations Committee, also shared some personal stories about outgoing Chairman William Zarit, much to the amusement of those in attendance, by relating Zarit’s policy priorities to some shared experiences between the two.

The festivities continued afterwards, with many guests staying to chat among themselves. Meanwhile, the focus now turns to next week’s Appreciation Dinner, when more than 500 people – government officials from both the US and China, plus, of course, many valued members – will gather at the China World Hotel to continue building bridges and discussing the issues of the day.