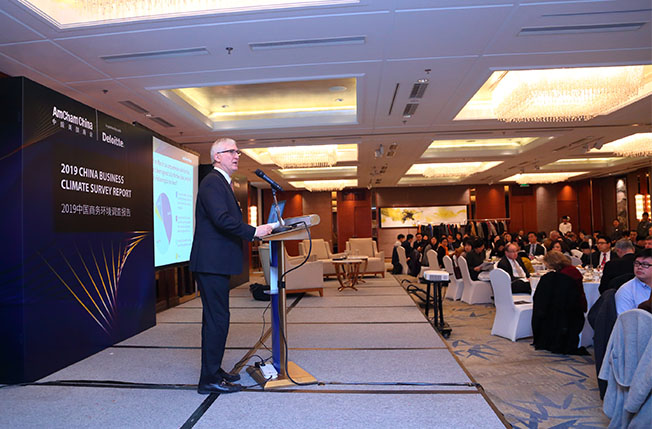 AmCham China’s 21st China Business Climate Survey Report (BCS) launched to more fanfare than ever last week, with the Chamber’s annual pulse check serving to provide members, government officials, media, and other key stakeholders with a better understanding of the current business environment in China. With the extension of the 90-day trade war truce between the US and China announced just days before the release, the 2019 edition of the BCS comes at pivotal time, and the new raft of data will offer both sets of trade negotiators with a better understanding of how AmCham China’s 900 member companies are faring in China.

Following a packed press conference of more than 40 domestic and international media outlets, the official launch of the Business Climate Survey Report played host to nearly 150 member company representatives excited to receive a detailed presentation of this year’s report, including a panel discussion and Q&A with AmCham China leadership and executives of AmCham China’s partner in the production of this year’s survey, Deloitte.

AmCham China Chairman Tim Stratford (pictured below) opened the day by thanking all members in attendance for their help in making the 2019 BCS such a success through their participation and comprehensive survey responses. He went on to thank Deloitte and the AmCham China staff for their hard work in the creation, administration, and analysis of the BCS and resulting report.

Stratford also announced a new tool recently rolled out by AmCham China, the “Flash Survey”, designed “to better understand members' viewpoints on current events and issues related to our work.” The inaugural survey distributed between February 19-21, asked members about their expectations for the March 1 trade negotiation deadline. The results of the flash survey showed that a majority of the membership wanted the tariffs to continue, and – by a very wide margin – respondents wanted bilateral talks to continue regardless of whether tariffs stayed in place.

Kevin Li (pictured below), Risk Advisory Partner at Deloitte China, followed Stratford’s opening remarks with an introduction to this year’s BCS methodology and a discussion of the results and their findings. Li noted that 80% of respondents reported an increase in revenue or revenue comparable to last year. However, profitability was reported as down overall. Li also highlighted respondents’ concern over the US-China bilateral relationship and decreased optimism relative to previous years. Despite the slowing of investment plans, the report also made clear that the investment environment in China remains strong.

Further diving into the BCS data, AmCham China President Alan Beebe (pictured below) addressed areas of concern for members. Beebe highlighted three main areas: regulatory challenges, innovation challenges, and concerns regarding the bilateral relationship. Additionally, Beebe noted that three out of four sectors surveyed had listed an inconsistent regulatory and policy environment as their number one challenge; the second and third greatest challenges across the board were both related to the US-China bilateral relationship.

Sitao Xu kicked off the discussion by highlighting the importance of this year’s BCS during such turbulent bilateral conditions, before asking Gloria Xu about the decision-making process that goes into 7-10-year investment choices in the current environment. In her response, Xu was quick to point out that just because companies are not investing right now doesn’t mean that they’re thinking of not investing at all. As an example, she pointed to Dow’s decision to build a new plant in China as of last September. “The fundamentals are still there, similar to why these companies were here 40 years ago. Factors such as how much consumer power China’s market has and will have in a decade can’t be ignored,” she explained. “We all hope that tariffs can go back to what they were. But we have to deal with what is now a given, namely hiked tariffs for many products”.

Sitao Xu then discussed market access barriers with Roberta Lipson of United Family Healthcare. Regarding the current investment environment, Lipson stated, “[United Family Healthcare has] a very aggressive investment strategy and that has not changed. Like Dow, our company is addressing a Chinese market.” Lipson added that “for companies that are trying to make things here that are for the US or international market, some are certainly moving production from China to Mexico, since their markets are in the US.” Lipson went on to explain, “We’ve been suffering from being on the negative investment list and having our investments restricted to 70%. However, we were happy to see healthcare going from the negative list to the encouraged list on the new investment catalog draft last week. Trade issues don’t really impact us, but we have chosen to take some of our products from Germany and other countries instead of from US companies.”

Complementing his fellow panelists, Lester Ross (pictured above) was able to provide insights on the future of business in China from a legal perspective. “China is much more concerned with innovation now, and Chinese people are a great source of innovation. The number of Chinese patents registered in China or the number of foreign ones registered here have both gone up significantly,” explained Ross. He noted that many are derivative patents and others are not subject to substantive review, though, and they do not necessarily constitute significant advances, underlining that patent quality is another metric to study.

To close out the discussion, panelists were asked whether they were optimistic or pessimistic about US-China relations. Ross stated that he was cautiously optimistic but longstanding issues still need to be resolved, while another panelist contested that the onus to change might not be entirely on China and that a “global mindset” might often just be an American mindset. While agreeing that some structural changes need to be made, Lipson said that some complaints of American companies may be excessive, citing that many issues faced by foreign companies are similar to those faced by domestic companies, wondering whether perhaps there is a question of operational preparedness more than asymmetric market access.

Tim Stratford delivered the closing remarks, addressing the US government’s desire for a stronger voice and “more teeth”. But, as Stratford described, everything that gives more teeth costs, and will cost different industries and companies differently depending on the mechanism employed. Stratford called for restraint and stressed that American companies and the American government alike must think carefully about what exactly is needed in this situation, and what they are willing to give up in order to satisfy the needs of the American business community in China.