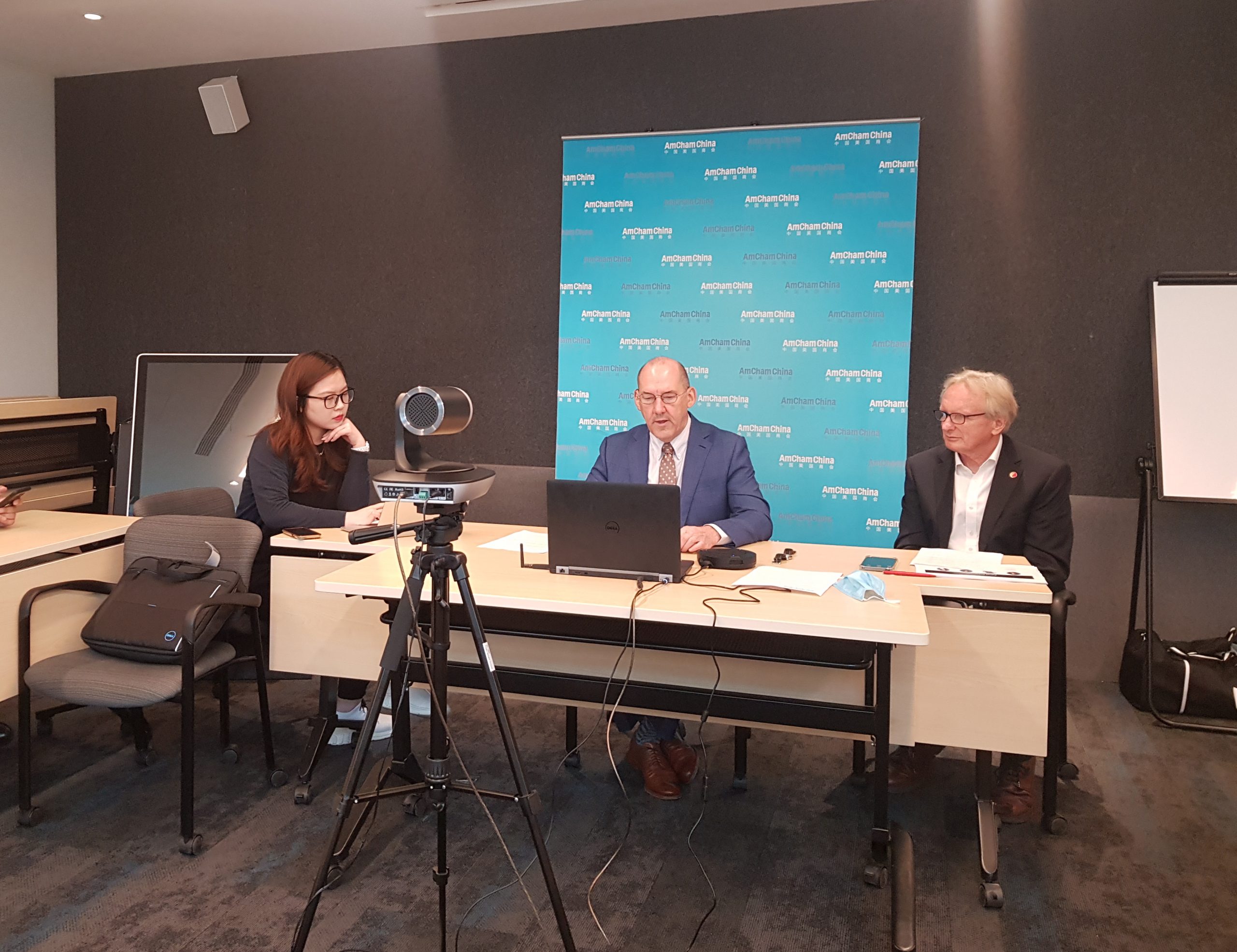 On Tuesday, August 17, AmCham China held the Fourth All Member Standing Call on vaccine and travel status in China. The event, held virtually due to Beijing’s current COVID restrictions, brought together key leaders from different sectors of the AmCham China Community to give the most up-to-date information on vaccine availability, efficacy, and travel restrictions.

Helen Zhang, Director of Pharmacy at United Family Healthcare, shared her insights on the current COVID-19 vaccine status and answered some frequently asked questions. Zhang demonstrated the astonishing speed of vaccination clinical development worldwide, whilst responding to the question of Chinese vaccine’s global recognition. Quoting Prof. Zhong Nanshan, ‘no country is safe until all countries are safe’, Zhang appealed for global efforts in vaccination. During the FAQ section, she addressed a few popular topics such as herd immunity, the measurement of vaccine efficacy, possible infection after vaccination, booster shots, and flu vaccine. In brief, Zhang emphasized that vaccine is the most effective way to slow pandemic and restore to regular life, variants will continue to be challenging, and that we are most likely to need booster dose – maybe “mixed vaccination” for better protection.

Adh T. Stevens, Second Secretary and Consul of the U.S. Embassy’s Economic Affairs Section, shared updates on the current international travel situation. Responding to the question about when we will be able to open up for business and leisure travelers to the U.S., the answer is still uncertain, especially under the spread of Delta variant. Regarding vaccine recognition, he pointed out that the U.S. recognizes all those vaccines the WHO has given Emergency Use List, which currently includes two vaccines from PRC companies. If one wants to receive a certain vaccine in the U.S., that vaccine must be approved by the U.S. regulatory authorities, and currently no PRC vaccine manufacturer has even applied for approval. Regarding Visa applications, Stevens stated there has always been a great desire for students to visit the States, so despite rumors, the U.S. would like these valuable exchanges to continue. Regarding flights, Stevens said the U.S. government hopes the PRC will cease its five-one policy (one airline gets to have one flight to one city in one country for every one week) and return to compliance with the bilateral U.S.-China Air Transport Agreement.

Only Jiang, the China Marketing Manager at United Airlines, demonstrated the impact of vaccines on international travel between the U.S. and China. She updated the audience on the existing travel restrictions for non-Chinese and Chinese citizens from US to China, during which she specifically clarified the Chinese policy for vaccinated travelers. Jiang also shared with us United Airline’s current flight schedule, their change/refund policy and some special safety and cleanliness measures they’re taking during COVID-19, including implementation of touchless kiosk system to speed up check-in procedure, launched “Travel Ready Center” service for customers to review entry requirements from arrival destination, find/schedule local testing options and upload testing records and rolled out “Agent on Demand” service to give customers the flexibility to video chat with airport agent without direct contact.

Judy Liu, General Manager and Corporate & Partner Sales-China at Delta Air Lines, updated the audience on some important information with regards to flying from the U.S. to China, and returning to the U.S, during which she highlighted the pre-departure testing and QR code application for different flights (Detroit-Shanghai, Seattle-Shanghai).  Under the current unpredictable travelling context, Liu introduced Delta’s interactive travel requirements map available in Fly Delta app and delta.com with which travelers can plan and travel with certainty. Towards the end, Liu updated the audience on Delta’s current flight schedule, Delta CareStandard and Flexibility, and the 6-month SkyMiles Medallion Status Match.

Q1: Do you have any recommendations on mixing vaccine? Such as getting a SinoVac, then getting Pfizer or any other type of vaccine available in the U.S. What is the safety and advocacy for it? Would you recommend that to pregnant or breastfeeding women?

For the first part of the question about booster shots, it’s still very early in research. At this moment, I can’t offer much on the topic yet. If you’re in China, we must wait for the statement from the China CDC. If you’re returning to U.S. and you’ve already got SinoVac, can you get the Pfizer vaccine? There’s no study, but theoretically you can, so that’s up to the clinic where you’re getting your Pfizer vaccine.”

Q2: What impact do you think the upcoming Winter Olympics will have on international travel? Will there be stricter entry requirements, or maybe it will relax a little bit?

“It hasn’t been 100% clear, but they’re giving very clear signals about what they’ll be doing for the Winter Olympics: there will not be international spectators, only allowing the athletes and the support staff, forming a kind of iron bubble, and will be separated from the rest of the country. I don’t think we’ll get stricter. It’ll continue to be this level of restrictions. We’ll probably see more declarations from the committee when we’re closer to the Olympics.”

Q3: Do you think it possible that China will open its boarders to those countries at the same or lower level of risk? Do you see China adopting a more flexible model with regards to quarantine?

“China has adopted a zero-tolerance risk posture which doesn’t make sense because there will always be risk. We all saw the statement made by the doctor in Shanghai which was ill received. Of course, there is a desire to open up, to return to international travel, but I don’t think it likely that China will change its quarantine rules until we see a significant reduction worldwide in the virus situation.”

Q4: When will be the Pfizer vaccine be approved? Do you see any pattern or indication that there will be an approval in the months ahead?

“To get the conditional approval, you must first pass the panelists’ buy-in, then you have to go for the official buy-in by CFDA (officially the NMPA), then you have to go to the importation of the vaccine because the vaccines are now still in Germany, so there are many steps. It has now passed the panelists’ approval, but we need to wait as CFDA (NMPA) has their own timetable. There are a lot of rumors. One of them is that China made an mRNA vaccine by Vovax and the Academy of Military Science, so the rumor is we need to protect the Chinese industry. The other rumor is the recent Delta variant in Nanjing and Guangzhou affected the pace of approval for a foreign vaccine, creating less optimistic conditions. I can’t say for sure so keep in touch. The flu vaccine will be earlier and that’s something I want to address to the group.”

Q5: Will it be easier to get a Visa if one had Chinese vaccine or from a particular manufacture from another country?

“We engage with the Chinese authority on various levels, and we continue to emphasize we would like to see reciprocity in the way they treat travelers to China and how we treat travelers coming from China. So, they haven’t given us any indication that they would do that, and this has been one of the things that we’ve been requesting them to do: to recognize all the vaccines. We are engaging with them but have not yet received indication that they would do that.”

Q6: Is it easier or harder to get a green code if one travels through a third country to get to China?

“Delta Air Lines is operating 4 weekly flights from U.S. to China.  QR code for Detroit-Shanghai flight passenger is approved by China Consulate in Chicago, while Seattle-Shanghai flight passenger’s QR code is approved by China Consulate in San Francisco.  According to our data, we don’t see imbalanced booking cancellation within 48 hours before departure, if comparing the Seattle and Detroit flights.  Cannot say which Consulate is easier to give approval.

Q8: If a person is vaccinated with an inactivated vaccine (i.e. Sinovac or Sinopharm) two months ago in China, but a recent antibody test shows positive for both S and N protein. Is this due to the vaccination, or some other reason?

“If the antibody in your body is positive, it means two things: one is that you are exposed to the disease, the other is that you are exposed to a vaccine and your body produces antibody to combat the inactivated virus inside the vaccine. So, to answer that question, I have to ask: did you actually had a swab, a PCR test for your antigen to actually show a possible expose to any infectious source? If both of them are negative, then your antibody result is mostly because of the vaccine.”