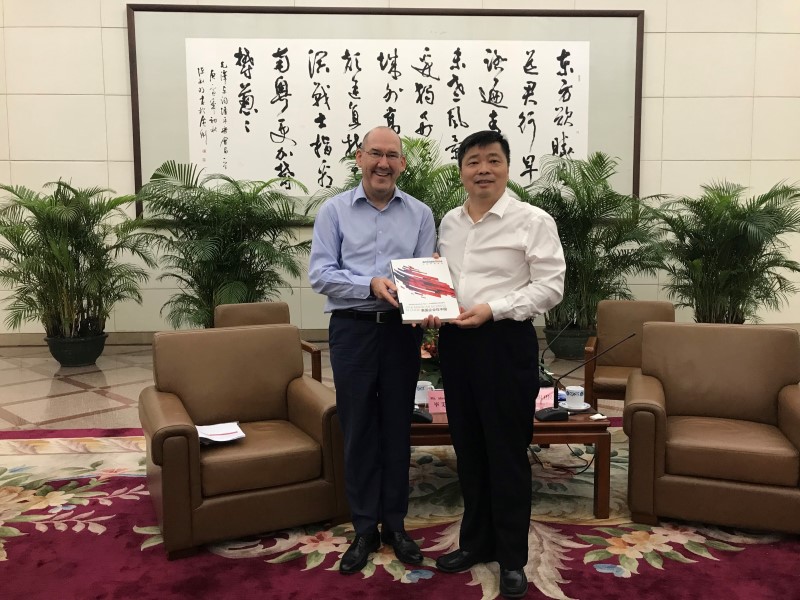 In 1978, the Third Plenary Session of the 11th Central Committee was held in Beijing. The meeting was so pivotal that it shifted the focus of the Party's work to socialist modernization and established the Reform and Opening-up policy. For a small fishing village clinging to the southern coast of China, the following year was marked as the beginning of a historic transition as Chinese leader Deng Xiaoping handpicked Shenzhen to be the trailblazer to realize his bold vision for a more open and modern China.

In 2017, nearly four decades later, Guangdong’s government work report stated that its GDP had reached RMB 8.99 trillion, sitting on the top among all Chinese provinces for the 29th consecutive year. In 2018, AmCham China’s Business Climate Survey reported Guangdong as one of the most successful provincial governments at attracting foreign investors.

To help member companies explore opportunities in this vibrant area and gain a better understanding of the strategic plans the government has laid out for Guangdong and the Guangdong-Hong Kong-Macau Greater Bay Area, AmCham China President Alan Beebe led a Business & Investment Outreach (B.I.O) delegation to Guangdong from September 12-14. The delegation constituted 43 delegates from more than 20 companies across a variety of sectors, including communications, information technology, healthcare, energy, manufacturing, financial services, entertainment, real estate, and fast-moving consumer goods.

Meeting with Vice Governor of Guangdong

On September 13, Vice Governor Ouyang Weimin, who oversees commerce, foreign affairs, and the Free Trade Zone in Guangdong, welcomed the delegation on behalf of the People’s Government of Guangdong. He briefed the AmCham China delegates on Guangdong’s business environment and invited more quality foreign businesses to invest in Guangdong.

Vice Governor Ouyang recognized America as one of Guangdong’s most crucial trading partners and believed that there are plenty of areas in which two countries could have more substantial cooperation. He thanked AmCham China for enhancing the communications and boosting economic activities between two countries.

President Beebe congratulated Vice Governor Ouyang for the great economic success Guangdong has achieved, and anticipated a roadmap for moving ahead. Beebe and Ouyang discussed the strategy and plan for the Greater Bay Area, as well as policies and incentives for attracting foreign investment. They also touched base on the Guangdong government’s strategic plans related to several specific industries, such as AI, blockchain technology, and medical institutions.

Despite a myriad of cooperation opportunities between the two countries, the recent escalating trade tensions have left business communities concerned.

During the meeting, Beebe reaffirmed AmCham China’s position and the concerns that the American business community has expressed about the escalating tariffs.

“There are no winners in a trade war, increased tensions in the US-China economic relationship will negatively impact member companies’ operations in China,” Beebe said, “AmCham China also urges the two governments to come back to the negotiation table with the aim of having productive discussions based on achieving results – focused on fairness and reciprocal treatment – instead of escalating the current situation.”

Vice Governor Ouyang agreed with Beebe and emphasized the importance of the active communications between the two countries’ business communities. He also introduced several measures for promoting foreign investment growth, such as further opening market access, providing talent and financial support, and strengthening intellectual property protection. Vice Governor Ouyang mentioned that he expected to collaborate with AmCham China to deepen the bilateral cooperation in trade, investment, technology, and healthcare.

During the trip, the AmCham China delegation met with both Guangzhou and Shenzhen municipal governments and held discussions on the business environment. AmCham China had fruitful dialogues on diverse policies and commercial plans with relevant local authorities, such as the Development and Reform Commission, the Administration for Industry and Commerce, the Department of Finance, the Industry and Information Commission, and the Food and Drug Administration.

The manufacturing and innovative hubs of the Pearl River Delta, Guangzhou and Shenzhen, have reached RMB 2.15 trillion and RMB 2.24 trillion in annual GDP, respectively. Guangzhou is home to many state-of-the-art technology and biomedicine companies, while Shenzhen has become a symbol of innovation and home to headquarters of big name high-tech players, such as Tencent, Huawei, Xiaomi, and DJI.

President Beebe credited both the Guangzhou and Shenzhen governments’ exertions to continuously improve their cities’ business environments for local, as well as foreign, companies.

All these special zones pilot and carry out new policies to attract foreign investment. GETDD currently holds the largest amount of American investment in southern China and goes to great lengths to streamline companies’ registration processes, promising to curtail bureaucratic red tape and assist companies as they go through the approval process. American companies in this area account for a significant amount of the total registered companies. Some member companies in the delegation that have already established their businesses in GETDD gave a positive appraisal of GETDD’s efficiency.

The Nansha FTZ also has a grandiose plan. When meeting with the AmCham China delegation in Nansha, Cai Chaolin, standing member of the CPC Guangzhou Committee and Party Chief of Nansha district, laid out a grand blueprint with ambitious plans to facilitate the development of financial services, high technology, and ports. He also listed four main advantages of Nansha, such as its superior geographical position, preferential policies, a cluster of modern industries, and appealing ecological environment. More great opportunities for foreign businesses, especially American businesses, are yet to come, Cai said.

Qianhai, another national level FTZ, positions itself as “the world’s Qianhai, a window on China” and leverages its geographical adjacency to Hong Kong to further deepen its cooperation with the international financial hub. It aims to establish a modern services cluster to better function as a vanguard of Belt & Road Initiative and Greater Bay Area, as well as a lynchpin of supporting the economic development of mainland China. Qianhai is also taking it up a notch regarding the geographical proximity to Hong Kong, carrying out massive infrastructure projects to reduce the commute time between Hong Kong and Shenzhen to half an hour or even shorter.

The Chinese government’s scheme to link all these cities together and integrate them into one massive economic and business hub has created a humming commercial powerhouse with a GDP of USD 1.6 trillion in 2017, contributing 11.8% of China’s total GDP.

During the trip, the AmCham China delegation raised several questions regarding the strategy and future plans for the Greater Bay Area.

As great opportunities lie ahead and amid a looming trade war between the world’s two largest economies, it has become more critical than ever for foreign companies to keep engaging with not only the central government, but also the provincial governments to explore more business opportunities.