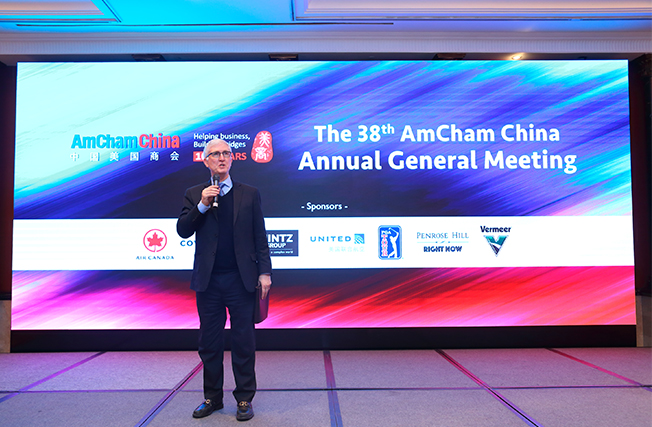 AmCham China held a sold-out Annual General Meeting (AGM) at the St Regis Hotel in Beijing on November 21. At the event, an array of AmCham China members and Forums & Committees were recognized for their achievements on behalf of American business in China. This year’s recipients have all shone in their own ways, building bridges through dedication and hard work in the community, despite a challenging time for US-China relations more generally.

"Now, more than ever, we need to work together, across sectors, to shape a workable framework to guide the US-China relationship for the coming decades. AmCham China is critical to that effort."

AmCham China Chairman Tim Stratford, who announced he will step down from the Board at the end of the year, delivered the opening remarks during a heartfelt speech in which he traced his memories of the Chamber all the way back to 1982, through his first spell as Chair in 2000-01, and up to the present day.

Stratford also shared with the membership – for the first time – high-level results from the Chamber’s year-long strategy review, which has charted the course for the Chamber’s next five years. He closed by sharing details of recent meetings with Vice President Wang Qishan and MOFCOM Vice Minister Wang Shouwen, and spoke of the new focus in US-China economic relations: an adjustment to globalization with “Chinese characteristics”.

The Pioneer Award, which recognizes those who have made significant contributions to the US-China relationship, was given to Elizabeth Knup. Based in China for more than two decades, Knup has been head of the Ford Foundation’s China office since 2013, and is responsible for the Foundation’s strategy in China and overseeing all grantmaking in the country.

Previously she served as Chief Representative of Pearson PLC, one of the world’s foremost education and publishing companies. Having started out at the National Committee on US-China Relations, she also served as the American co-director of the Hopkins-Nanjing Center for Chinese and American Studies, and was an AmCham China Board Member from 2006-08 and Co-Chair of the Chamber’s CSR Committee from 2005-07.

“I am deeply honored to be recognized by the American business community here in China,” Knup said. “Since the earliest days of my career, I have focused on strengthening the fabric of US-China relations across business, academic, and civil society sectors. Now, more than ever, we need to work together, across sectors, to shape a workable framework to guide the US-China relationship for the coming decades. AmCham China is critical to that effort. And, I plan to be working on it, too.”

Stratford also presented this year’s Service Award to AmCham China Vice Chair Colm Rafferty. Rafferty, after four years as a Governor (three of which have been as Vice Chair), terms out from the Board at the end of the year. In 2019, Rafferty oversaw many critical areas of the Chamber including Chapters, Member Operations, Business Services, and most notably the Long Term Strategy Project, which he initiated in 2018.

Rafferty invested a significant portion of his time, energy, and resources to develop a strategic roadmap for AmCham China in these unpredictable times, and also made sure to visit and engage with each of the Chapters during the course of the year.

Additionally, he initiated the idea of an L9 platform for Chambers to unite the commerce groups of nine like-minded countries in China, aligning with the L9 countries’ embassy group, and proactively recruited several new members for the Chamber, including companies such as Six Flags, Herman Miller, VIP Kid, TPG, Waitex, and others.

Rebecca Wang receiving the award on behalf of the Tax Forum

The President’s F&C Award was shared between the Agriculture Forum and the Human Resources Forum. This year, the Agriculture Forum, led by Michael Boddington (Asian Agribusiness Consulting), Yong Gao (Bayer), Juhui Huang (BRF China), and Owen Ma (Cargill Investment), helped drive the NDRC to re-open agricultural purchases from the US, including soybeans, with US companies allocated a tariff-exempt quota.

Titled The Future of HR – Organization, Infrastructure, People, and Culture, all four Forum leaders were among more than 20 speakers at the full-day conference, which has provided a key platform for AmCham China members and the broader HR community in China to benchmark trends and share insights about cutting-edge innovation in talent acquisition and retention, organizational development, employee engagement, and the creation of improved value for business growth.

The Chamber would like to thank all attendees of this very historic Annual General Meeting, as well as our sponsor companies who helped to make this event the success that it was.