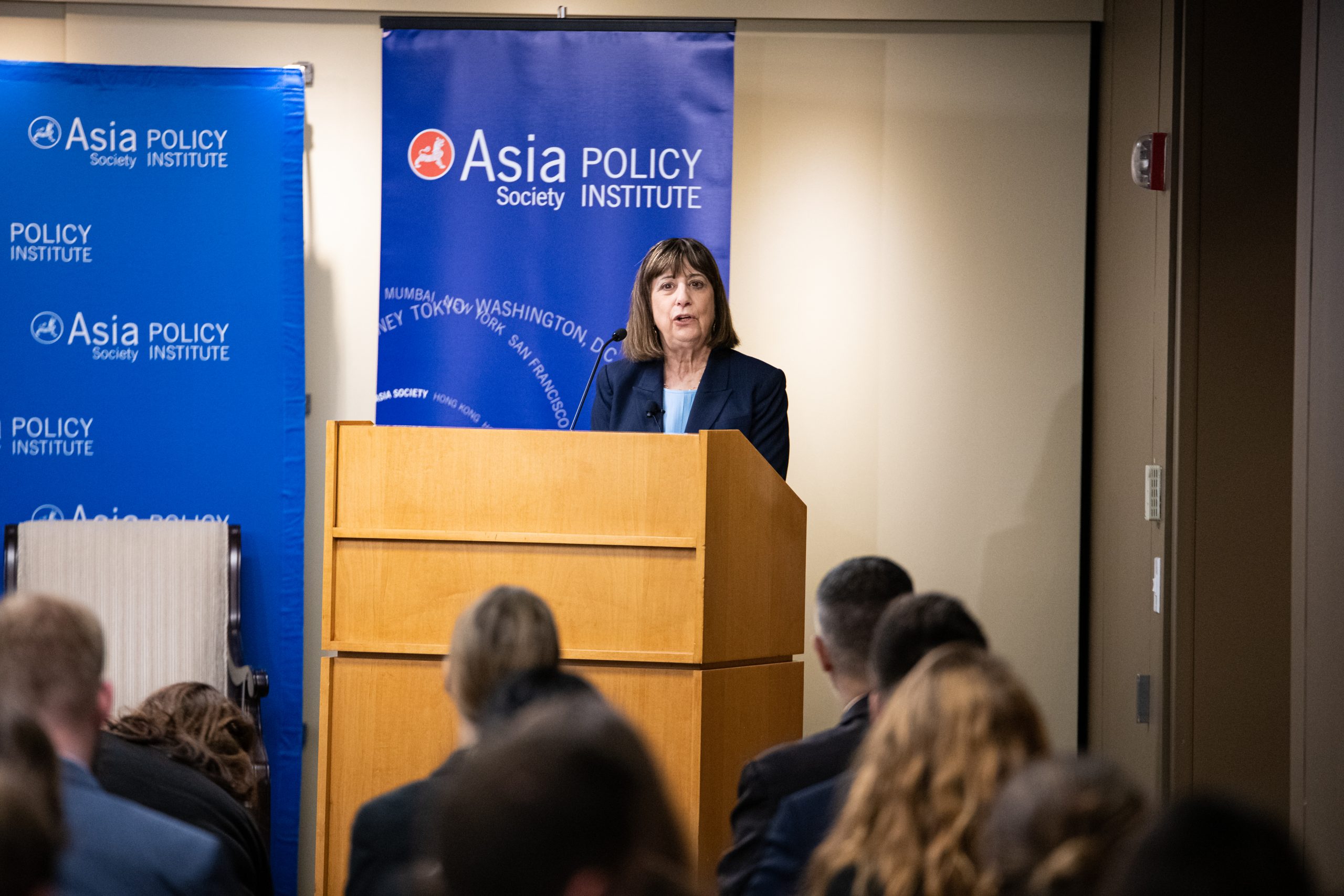 With all eyes focused on what actions a new US administration might take with respect to China, the AmCham China Quarterly spoke to Wendy Cutler, Vice President at the Asia Society Policy Institute and former veteran USTR trade negotiator, to get her thoughts on potential strategies, trade deals, tariffs, and a shifting balance of power in Asia.

A key difference in China policy that the incoming Biden administration is expected to show from the Trump administration is the aim of working together with allies and partners. Is this a strategy you think will be successful?

Wendy Cutler: I believe it’s critical going forward with our China agenda that the United States work more closely with our allies and partners. There’s an important opening there, as many share our concerns on China. The Trump approach of “going it alone” hasn’t worked; even with tariffs on $370 billion of Chinese imports, the Trump team was only able to reach an incremental Phase One deal. Given all the damage to the US economy and US interests resulting from the tariffs, the Trump team failed to achieve a solid and enduring deal that can lead to important, long-lasting, structural changes in China. It’s time to change that approach and put more emphasis on a collective response, including through multilateral organizations. In doing so, a Biden team should be prepared to listen carefully to the concerns and priorities of our allies and the approaches they want to follow. We are likely to find commonalities, but also some differences with respect to scope and ambition, so we also need to have realistic expectations about how far we can go with allies and partners.

Is there a worry for the US that perhaps some of their trading partners might now prefer to work with China instead?

Wendy Cutler: Many of our allies and partners have close economic ties with China and, for most, China is their largest trading partner. After an economic contraction in the first half of this year, China’s economy is now growing and, according to the IMF, will be in positive territory for 2020, unlike the US, the EU, and Japan. Thus, there are many economic and commercial opportunities in the Chinese market, which cannot be ignored. A growing number of our allies and partners share many of our concerns vis-a-vis China with respect to unfair trade practices and uneven playing field concerns. Many have also been caught in the crosshairs of our unilateral measures. So, I think they would welcome a multilateral approach if this would mean that they no longer be collateral damage in the US-China trade and technology war.

The Regional Comprehensive Economic Partnership (RCEP), signed in November 2020, brought together 15 Asia-Pacific nations, including China. Where does the US fit when it comes to this and other wide-ranging trade deals?

Wendy Cutler: The Biden administration has made it clear that their first focus is going to be on domestic priorities, including addressing the COVID-19 pandemic, economic recovery, and rebuilding US competitiveness. The President-elect has gone so far as to say that, until those steps are taken, he is not going to be entering into new trade agreements. I think there is a growing sense in the United States, particularly with the entry into force of the CPTPP and recent signing of RCEP, that Asia is moving on without us. So, how do we re-engage on the economic front in the region? If we’re not ready for these big, comprehensive mega deals in Asia, then, in the immediate term, we should look at pursuing narrower sectoral trade agreements, in areas such as digital trade, medical supply chains, or issues surrounding trade and climate.

China was originally excluded from what would have been the US-led Trans-Pacific Partnership (TPP). But after the US dropped, it became the CPTPP. And just weeks ago, President Xi expressed an interest in China joining, which would complete a dramatic turnaround in terms of lead roles. What’s your view?

Wendy Cutler: In my view, China is not ready to join CPTPP any time soon. There are many chapters and provisions in the agreement that would present enormous challenges for China. As China puts more emphasis on the role of state-owned enterprises how can it sign on to the SOE chapter? As China continues to regulate, protect, and restrict data flows, how can it sign on to the e-commerce chapter, which promotes the free flow of data? CPTPP also includes an ambitious labor chapter, which calls on parties to implement laws regarding the right to association, forced labor, among other labor practices, so this chapter, too, presents serious challenges for China. There’s a real disconnect in my mind between the words of Chinese leadership about considering CPTPP membership and its policies and practices on the ground.

With respect to the United States, I believe that there are compelling reasons for it to consider joining the CPTPP sooner rather than later, albeit with modifications and updates. By being part of the agreement, the US would regain its seat at the table to help write the rules and standards for the region. It would also provide the opportunity to establish secure supply chains with a trusted group of countries. Finally, it would allow our companies and workers to not be disadvantaged as they compete in the most dynamic and innovative region of the world. But, there is serious and critical work that needs to be done domestically to revive our economy and bolster our competitiveness before the US can seriously consider rejoining CPTPP.

How has the outlook from the rest of Asia changed with regards to China and the US, and how they see themselves on the trading stage?

Wendy Cutler: The Asian trade landscape has changed dramatically over the past four years. As the United States retreated, other countries in the region have gained a confidence about their ability to embark on deals and initiatives without the United States. This development will present a challenge for the new administration as they try to rebuild ties and trust in the region. That being said, our trade partners are keen for the US to re-engage on regional trade initiatives, including, but not limited to, the CPTPP.

With all the talk about the US and China being in opposition, are there areas where we could expect to see collaboration between the two sides?

Wendy Cutler: The President-elect has expressed an interest in working with China on global issues that require global solutions, including climate change and the ongoing pandemic. Some allies and partners are worried that if the United States were to put a premium on cooperation with China on some fronts it might mean the US would go soft in other areas. I don’t think that’s going to be the case. I believe the Biden team recognizes that the relationship will be multifaceted with areas where we can collaborate, areas where we will compete, and areas where we’re going to continue to have serious tensions.

What’s your view on how the Phase One trade deal has been implemented so far? Is Phase Two still a possibility at some point further down the line?

Wendy Cutler: To a large extent, China has done a good job in implementing its commitments under the Phase One agreement. It has put in place most of the measures it promised on IPR, agriculture non-tariff measures, and financial services market access. With respect to purchasing commitments, given COVID-19, China is doing a relatively good job of trying to meet these targets, which, frankly, were unrealistic even before the pandemic. That said, when you look at the Phase One agreement and what it required of China, it fell way short of the objectives that the Trump administration set out to achieve. More than ten months later, we still haven’t heard anything about Phase Two negotiations and the important structural issues that were to be addressed. I suspect that the Biden team will look at the unresolved trade and technology issues with China under the rubric of a broader China strategy. I anticipate that they will choose to address many of the Phase Two issues on a multilateral basis, perhaps in the WTO or in ad-hoc coalitions with like-minded countries.

What else do you expect to see from the Biden administration with regards to China? What will change and what will stay the same?

Wendy Cutler: In my view, a Biden China policy will be more strategic, more predictable, and less chaotic. I welcome the return of an interagency policy deliberation process versus announcements on Twitter. The administration will also emphasize working with allies and partners, as well as through international organizations and multilateral groupings. One can’t underestimate the importance of developing policies with a coherent strategy, and taking into account the views of stakeholders, Congress, and our allies and partners as we move forward. If we do so in a deliberate way, we develop and implement smarter and more effective policies in line with our strategic objectives. Additionally, I expect that there will be more communication between US and Chinese officials. President-elect Biden has already had extensive meetings and dialogues with Xi Jinping, and his foreign policy team announced to date has deep experience working with their Chinese counterparts.

However, this does not mean that we’re going to be glossing over issues, or there won’t be serious tensions. Make no mistake about it, we’re going to continue having a rocky time in our relationship with China. 73% of the American public have an unfavorable view of China, and this is one of the few issues where both sides of the aisle in Congress can find common ground.

Finally, what do you think will happen with tariffs in the Biden administration? Do you think they have been effective as a strategy and do you expect them to stay in place?

Wendy Cutler: I don’t think the tariffs have been an effective policy tool. Initially, they helped bring China to the table, but soon lost their utility as they spiraled out of control. Given all of the tariffs that the Trump team imposed against Chinese imports, we should have been able to use that leverage to get a much more detailed and meaningful trade agreement that addressed serious structural issues. But, now that the tariffs are in place, I think they’re going to be difficult to unwind, unless the President-elect can show he is getting something in return from China. I hope the process for seeking exclusions from the tariffs by US companies and workers are reviewed and implemented in a more transparent way that is also more responsive to US interests. Frankly, as the latter tranches of tariffs were imposed, they ended up, in many instances, hurting US companies, workers, and consumers more than Chinese interests, and led to counter-retaliation by China, which increased the damage to US interests.

This article appears in Issue 4 of the AmCham China Quarterly Magazine, which you can read here.