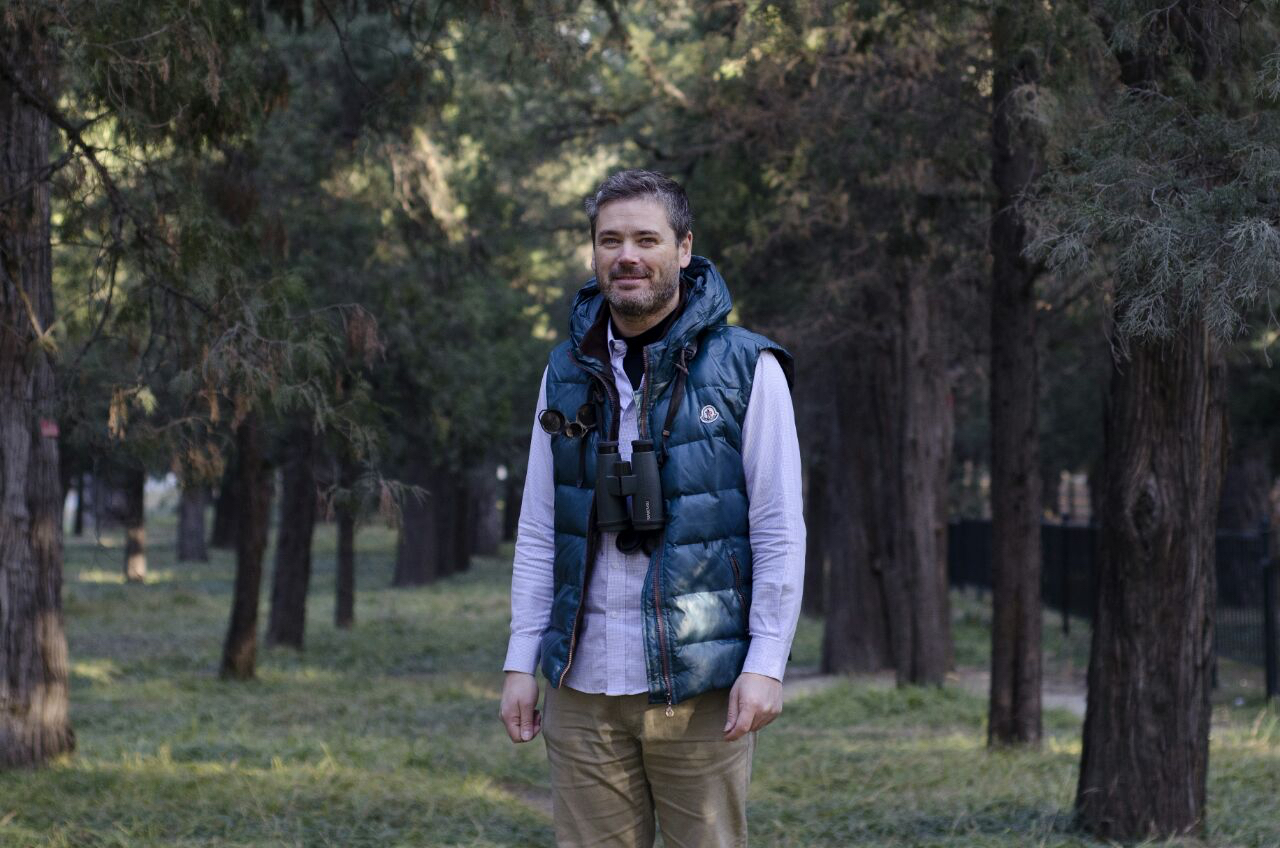 Terry Townshend is a Beijing-based biodiversity and climate change expert with expertise on legislation, wildlife conservation, and China. He runs the Birding Beijing website, celebrating the birds and wildlife of China’s capital city. He was formerly lead author and co-author of the annual Climate Legislation Study in partnership with the London School of Economics. In 2017, in partnership with Chinese NGO ShanShui Conservation Center, he helped devise and set up a community-based wildlife watching tourism project with yak herders on the Tibetan Plateau. The herders were awarded the first community-based tourism concession for a National Park in China, informing policy development for China’s national park system.

In 2018, he became a Fellow of the Paulson Institute, advising their conservation program, and in 2019 he was invited by the Beijing Municipal government to consult on a project to protect and restore Beijing’s biodiversity. In 2020 he co-authored a landmark study on how to finance biodiversity conservation: “Financing Nature: Closing the Global Biodiversity Financing Gap”, published to inform the UN Convention on Biological Diversity, due to meet in Kunming, Yunnan Province, in October 2021.

Conservationist and passionate bird watcher Terry Townshend has dedicated the last decade to discovering, researching, and protecting China’s vibrant biodiversity, providing education on the necessity of nature conservation, and advocating for environmental reforms at both the policy and community level.

The incredible journey begins the same way it has every springtime since 1417. Taking flight from the eaves of the Forbidden City, the swifts glide towards Mongolia, beginning a voyage that closely mirrors that of the ancient Silk Road. Weaving through central Arabia and into tropical Africa, where the finally reach their destination, they rest on Africa’s Western Cape before their return journey to Beijing several months later. By February, the Beijing Swift, a bird small enough to fit in the palm of your hand, is ready to embark on the long voyage back.

The Beijing Swift’s journey is just one of the remarkable stories that conservationist Terry Townshend has helped to uncover in his work with Birding Beijing. A passionate environmentalist, Townshend moved to China’s capital city in 2010. He recalls his surprise at the wealth of biodiversity in the city’s birds at the start of his exploration, when he quickly realized that “It’s actually a great place for birds – more than 500 species have been found in Beijing.” For context, Townshend explains that, of all the G20 capital cities, Beijing comes in at number two for the number of avian species recorded.

With this inspiring discovery, he founded the community bird watching group Birding Beijing, which functions as much more than a group of hobbyists with a shared passion. Even more importantly, it serves to connect and invest city dwellers with the untapped wealth of biodiversity surrounding them. He explains his environmental philosophy in very human terms. “I’m a passionate believer that to protect our biodiversity, we need more people to fall in love with it. There’s a great quote by a Senegalese conservationist, ‘In the end, everyone wants to protect what they love, but we can only love what we know.’”

Although China has seen undisrupted economic growth over the last few decades, Townshend observes that we’ve also seen a policy of economic growth at all costs – with no larger cost than that to the environment. Nonetheless, in more recent years, he perceives encouragement in a growing recognition that this previous model is not sustainable. He points to President Xi Jinping‘s frequent mentions of an “Ecological Civilization,” which Townshend explains as “the harmony between the economy and the environment, because a healthy economy relies on a healthy environment.”

Below that top-level rhetoric, there have been meaningful, measurable policy and legislative changes. From the strengthening of the Environmental Protection Law and Wildlife Conservation Laws, the creation of a National Parks System and the banning of further reclamation of coastal wetlands, to increased establishment of heritage sites, tangible change and significant support for environmental issues are gaining traction in China. Alongside policy changes, there’s been a shift in how government performance is measured. Townshend cites recent articles in Chinese media suggesting that environmental criteria are now becoming as prominent an economic indicator as GDP.

Pressed for possible reasons behind this policy pivot, Townshend perceives some globally recognized answers. He cites a growing economy’s burgeoning middle class and increased public awareness and concern on climate issues, but he also points to a larger worldwide movement. “I call it an environmental awakening, because it’s a shift on several fronts.” He is referring to the work that has been done in the past 10 years, much of it by young people, who are concerned not only with air quality and carbon emissions, but who are also making great strides in biodiversity conservation. These local trends reflect the globally evolving perception. “Local NGOs continue to spring up across the country, protecting endangered species or local habitats, and the number of bird-watching societies has increased hugely over the past decade, with more than 70 currently across China.”

While recognition of climate issues is progressing in China, Townshend still sees a larger lack of awareness and concern for environmental issues than in Western countries, particularly concerning biodiversity conservation. But he hopes China will catch up fast. The Chinese city of Kunming will host the United Nations Conference on Biodiversity (COP15) this October. This, combined with the other progress China is making on climate change, provides some encouraging signals.

Within the hierarchy of environmental policy issues, Townshend notes that biodiversity conservation often takes a lesser place when compared to carbon reduction strategies. Attuned to informing the discussion to address both the perceived and actual impact of both issues, Townshend emphasizes the two most crucial global consequences of biodiversity loss: economic sustainability and public health. “If the world were to lose pollinators, it could cost the global economy more than $200 billion a year. Besides the economic impact, there is an increasing body of evidence linking public health risks with biodiversity loss. If you look at the last few decades, we’ve had very bad biodiversity loss. We’ve also experienced outbreaks of several zoonotic diseases, such as SARS, MERS, Ebola, and COVID-19. All of these zoonotic disease outbreaks have come during that period of severe biodiversity loss.”

With climate issues firmly situated on the agenda, Townshend argues biodiversity must be elevated in the conversation. “As the COP conference in Copenhagen paved the way for meaningful pledges by world governments at the Paris Agreement, this year at the COP15, 190 governments are due to determine a new international framework to tackle biodiversity. How much involvement world leaders will have in this issue remains to be seen.”

Townshend recently collaborated with colleagues at the Paulson Institute, the Nature Conservancy, and Cornell University on a report, “Financing Nature: Closing the Biodiversity Funding Gap,” that outlines current global expenditures on nature conservation and projects future spending needs over the next ten years to protect the most essential biodiversity. “We found that it will cost an additional $700 billion a year over the next ten years. It is a big number, but if you look at in context, it’s less than 1% of global GDP, and less than the world spends on soft drinks annually.” he says.

So, how to close that financing gap? Townshend advocates dual strategies identified in the report: reforming subsidies and increasing private sector investment. “One is to reduce the amount of funding needed. A key area to reducing this amount is to reform harmful agricultural subsidies, as well as forestry and fishery subsidies.” Reviewing and reforming current agricultural subsidies in particular could close the financing gap by up to half. The report also examines how to increase future funding for nature conservation, pinpointing several existing mechanisms that can all be scaled up. “Research indicated that governments are only able to provide a small fraction of the funding necessary. The rest of it has to come from the private sector. It’s not about creating new money; it’s about changing the current way investment is done.”

Steering investment into nature-positive spaces will not happen spontaneously or haphazardly; there must be economic returns to incentivize and sustain such a shift. Townshend leaves it to governments to create the right conditions and “the right regulatory frameworks that make investment profitable for the private sector.” He predicts that a key debate over the next few years will be what that regulatory framework should look like. That’s next up on the agenda for Townshend and his colleagues. “Business needs to work with government to have that conversation in what’s going to work that enables us to meet these challenges, and still enable companies to make a profit.”

A snow leopard caught lounging in the Valley of the Cats.

In a remote area of the Tibetan Plateau, inside China’s first pilot National Park, lies a spectacularly unspoiled valley. Dubbed China’s “Valley of the Cats,” Sanjiangyuan is home to some of China’s most majestic apex predators, roaming grounds to the Snow Leopard, Leopard, Brown Bear, and Lynx. Of all his work, Terry Townshend is most proud of this project, led by the ShanShui Conservation Center at Peking University. This pioneering effort in community-based wildlife tourism serves the dual purpose of both stimulating the local economy whilst simultaneously providing protection for, and education about, endangered apex predators.

Visitors have the opportunity to stay with one of the local host families and experience the Valley’s incredible wealth of wildlife firsthand. The local government was keen to ensure not only that all profits stayed within the community (45% to host families, 45% to a fund to benefit the community, and 10% towards Snow Leopard conservation projects) but also that the community would maintain autonomous control over the project. The community set the prices, decided on capacity limitations, and created a visitor code of conduct to ensure there was no lasting impact on the environment.

Townshend finds the shift in attitude towards these apex predators most gratifying. “There are 22 families in the community, all yak herders. Before this program, although I would not have called the relationship between the community and predators hostile, it was certainly tense. Now, the community sees these animals as a source of pride, a huge asset, and there is no question that people would ever harm them. This program has fundamentally changed the dynamic in the community and it has been incredibly rewarding to see.”