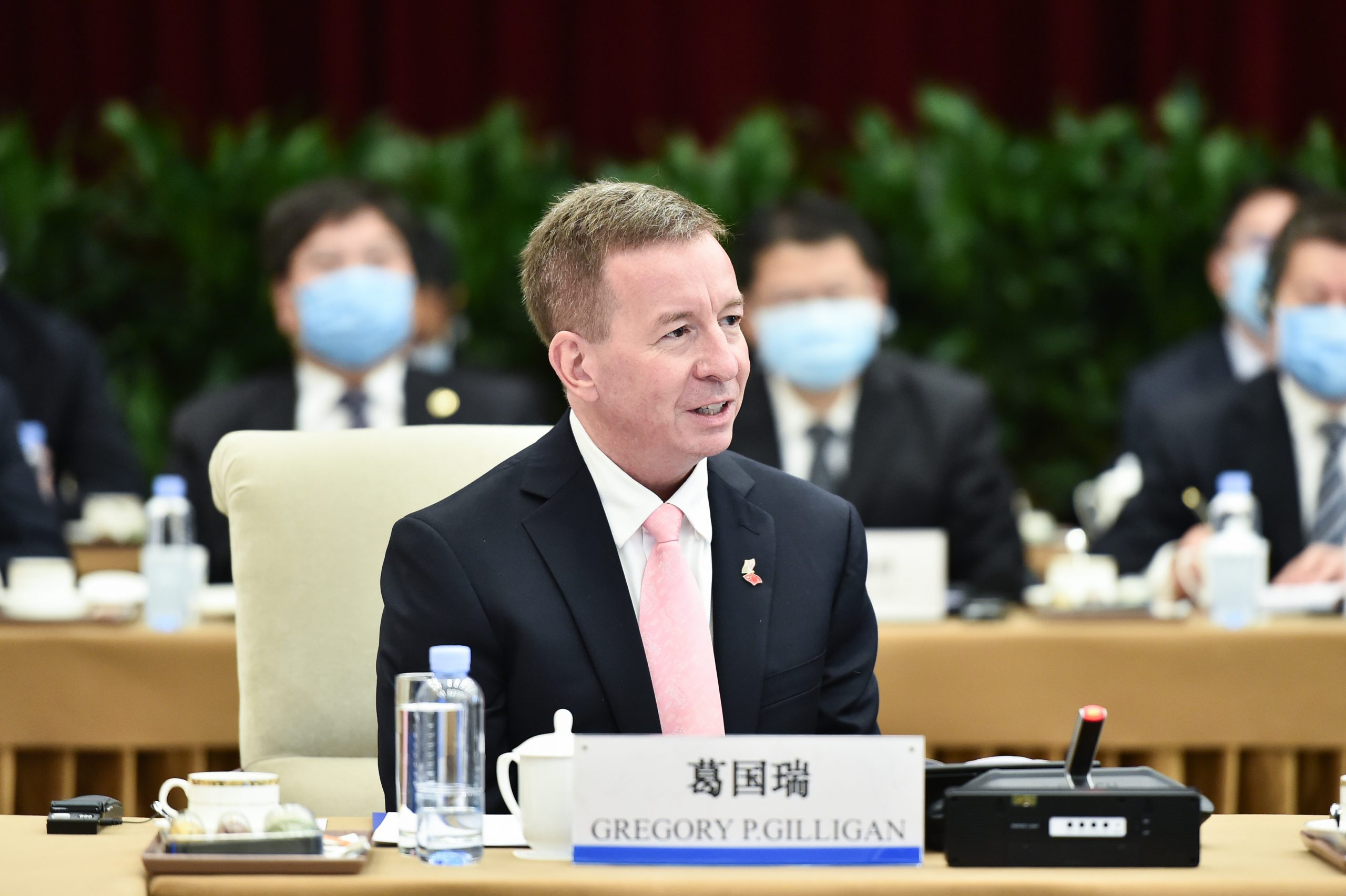 AmCham China Chairman Greg Gilligan met with Chinese Vice Premier Hu Chunhua and other senior Chinese government officials on Tuesday this week at a symposium with foreign business associations in Beijing, which discussed the country’s COVID-19 response, member efforts to resume operations, challenges posed by international border restrictions, as well as other relevant topics including IPR protection, transparency, market openings, and other regulations on optimizing the business environment.

Invited to make remarks at the roundtable meeting, Gilligan began by highlighting the efforts made by AmCham China and its member companies in contributing to China’s COVID-19 relief efforts, noting that the US business community had raised more than RMB 600 million in donations and materials for those areas most affected.

After mentioning some of the Chamber’s other efforts, including the newly launched Social Impact Initiative and the Back to Work Charter Flight, which will fly from the US to China this weekend, Gilligan laid out four observations on the current state of US-China economic and trade relations, followed by three suggestions to the Chinese government.

US-China relations, he said, are now at a critical period in history, with mutual trust arguably at the lowest point since the establishment of diplomatic relations 40 years ago, highlighting the importance of AmCham China’s role as a bridge between both governments. Second, the lack of mutual trust between the two countries stems from a mutual misunderstanding of the other side, a fact that support AmCham China providing objective data and facts, as well as constructive feedback, to both sides regardless of the situation. Third, Gilligan noted that the domestic political situation in the US has changed, meaning that China should aim to improve and strengthen contacts with the US, including through enhanced communication channels. Fourth, even in the face of deteriorating US-China relations, a situation exacerbated by the COVID-19 pandemic, Gilligan stressed that US companies in China are still fully committed to the Chinese market, offering survey data to back up this point.

Gilligan then proposed three suggestions to the assembled Chinese leaders. First, he said, it is necessary to ensure that economic and trade relations continue to be the foundation upon which the wider US-China relationship is built. Second, there is a need to create a platform that provides an opportunity for policy makers and business representatives to build trust through open and direct dialogue – an area in which AmCham China can play a crucial role. Third, Gilligan recommended that China continues to strengthen high-level opening up, optimize the business environment, effectively expand and support foreign investment and development in China, and apply market forces to continue to attract foreign companies to China. In particular, Gilligan noted certain recent policy developments that purport to make clear that foreign-invested enterprises in China are treated equally in key areas such as licensing, standard setting, and government procurement, saying that AmCham China also expects laws and regulations to be fully and consistently implemented.

Hu Chunhua, who made a keynote speech at the AmCham China 20th Annual Appreciation Dinner & 100th Anniversary Celebration last December, called in his remarks for continued commitment to a higher-level of opening-up, providing a better business environment for foreign-invested companies, and creating more development opportunities.

Hu said that China is making institutional changes to accelerate the improvement of the foreign-investment promotion, protection, and service system, with a focus on addressing the concerns of foreign firms, as China remains committed to opening up.

He also expressed hope that foreign business associations will deepen the bond between Chinese and foreign firms and help strengthen foreign investors' faith in their future development in China. Hu added that foreign companies in China have stood the test of COVID-19 and made significant contributions to stabilizing employment and spurring economic growth in China.

Earlier in the meeting, MOFA Vice Minister Ma Zhaoxu said he very much agreed with Gilligan’s remarks, saying that the Chamber and its membership should continue its role as the anchor in the US-China relationship, and keep conveying an accurate picture of on-the-ground realities to both governments.

Meanwhile, MOFCOM Vice Minister and Deputy China International Trade Representative, Wang Shouwen, noted in his remarks that the government recognizes the importance of support staff, such as teachers, to the wider business community of executives and their families, and had been working closely with the Ministry of Education to fast track the return of foreign teachers to China, acknowledging a key advocacy point that AmCham China has raised repeatedly in recent meetings with Chinese government officials.

Earlier in the day, Gilligan attended a high-level ceremony at the Great Hall of the People in Beijing, at which Chinese President Xi Jinping recognized a number of individuals for their part in fighting COVID-19 in China.

Gilligan was one of a very small number of foreign nationals invited to attend the event, in recognition of the efforts made by AmCham China and its members toward China’s COVID-19 relief efforts.