Hitching a Ride Along the New Silk Road 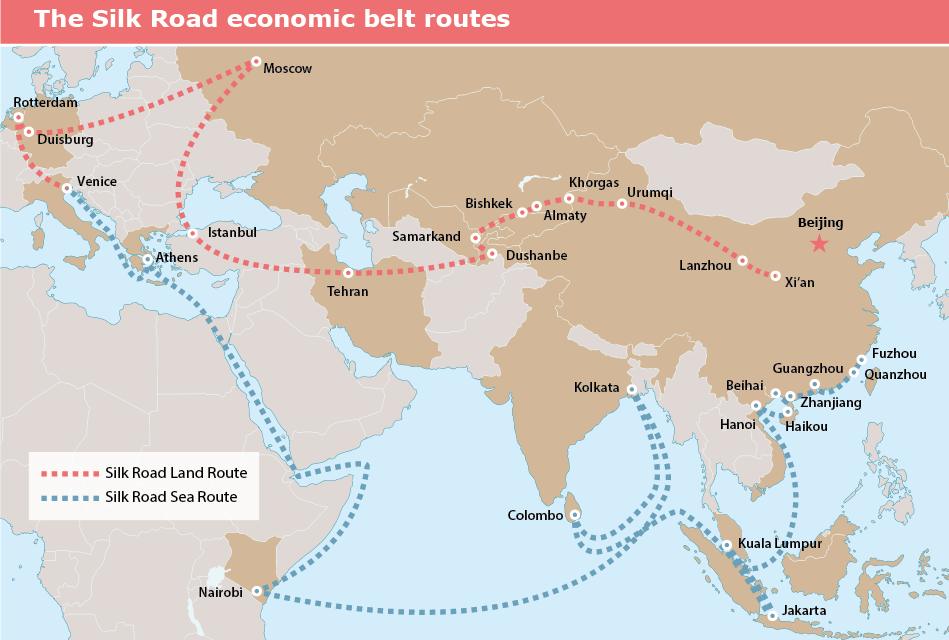 Since Chinese President Xi Jinping initially announced the One Belt, One Road (OBOR) initiative in 2013, it has become a source of significant curiosity and discussion to understand what exactly the initiative will entail and its implications for those inside and outside of China. While OBOR is still taking shape, its scope has emerged as incredibly broad, covering over 60 countries, with finance, trade and diplomatic goals. Additionally, the economic aim of the initiative is to bulwark China’s domestic economy in the face of slowdown and restructuring. Both the amorphous nature of the initiative and its domestic orientation mean there are limited ways for foreign business to capitalize on the initiative. However, two possible channels still exist: partnering with Chinese firms on OBOR projects; and seeking opportunities through the other countries involved in the initiative.

What's the point of OBOR?

It’s important for foreign business leaders to understand that while OBOR will support a large number of diverse investments in the region, the initiative is first and foremost meant to support China’s own political and economic needs, not those of the business community.

Seeking new drivers of growth as well as outlets for investment and excess capacity are strategic priorities for the Chinese government. OBOR allows for greater integration with the 60-odd countries along the new Silk Road, and will allow China to take advantage of combined market strength and potential growth of the countries.

Infrastructure development in countries along the new trade routes will help foster growth within their economies and grow external demand for China’s goods and services. Construction projects will provide new work for the nation’s slowing construction sector, and greater connectivity through transportation and communication networks will provide foundations for trade growth between the economies. Enhanced trade also supports RMB internationalization through its use in trade settlement, while new financial linkages and development projects open new investment channels and targets for Chinese capital.

However, none of these goals are particularly new. Instead, OBOR unites China’s existing development priorities under a single banner, providing strategic focus and impetus. For example, China’s long-running “Go Out” policy has sought to incentivize outbound foreign direct investment and expansion beyond China’s borders, and China Development Bank-funded projects are increasingly common in developing countries. The aim of expanding China’s regional roles politically and economically is also reflected in other current initiatives. The recently founded Asia Infrastructure Investment Bank targets similar aims, expanding China’s influence in multilateral policy-making beyond its constrained voting privileges in current institutions such as the World Bank, and providing further funding for regional development projects that can utilize Chinese expertise and labor.

As a result, OBOR is not expected to significantly alter the current trajectory of China’s policy focus, either domestically or internationally, but rather provide some more focus and additional momentum to efforts and policies already in place.

What it means for American business in China

Foreign business in China probably won't see much change as a result of OBOR, as the initiative provides a strategic framework for China’s existing priorities, and is not aimed at foreign companies operating within China. Furthermore, with a focus on strengthening its domestic economy, China will use OBOR to directly benefit Chinese companies. Many of the projects that have already fallen under the OBOR label involve Chinese state-owned enterprises, such as China Railways Construction Corporation, State Grid Corporation of China, China Unicom and China National Petroleum Corporation. That being said, there are some potential business opportunities.

The projects most likely to be supported or promoted by the OBOR initiative will be in infrastructure, whether transport, financial, energy or information and communications technology. The initiative is not expected to alter the bidding process for these projects to favor foreign companies. However, for those not already involved in Chinese infrastructure development, partnerships with Chinese companies benefitting from expansion driven by OBOR remains an option.

We have seen international clients sign partnerships with Chinese companies on projects that fall under the OBOR umbrella, such as clean energy generation in Pakistan’s Punjab province. However, these have been conducted through normal business dealings, not through a centralized OBOR intermediary. While the Silk Road Fund is established to invest in and generate returns from OBOR infrastructure projects, there is no centralized policy maker responsible for implementation of the initiative. As a result, partnerships are likely the best route for foreign companies in China looking to leverage OBOR.

An alternative to seeking opportunities from within China is exploring opportunities on the other end of the projects. OBOR projects will be anchored in government-to-government deals, involving national and local governments as well as domestic companies in the countries along the expanded trade routes. This will create new channels for engagement and partnerships for companies willing and able to engage partners outside of China.

Additionally, OBOR will further incentivize Chinese companies to expand beyond the nation’s borders, adding momentum to the already growing trend of Chinese companies going abroad. This will create some incremental demand for services and expertise as these companies seek to navigate international markets and governments.

While the One Belt, One Road initiative will not bring any radical changes to the operating environment or a wave of new investment or business deals, there will be some added opportunity for those willing to seek out and work with partners, whether governmental or business.

Oliver Chase is a Project Consultant at APCO Worldwide.