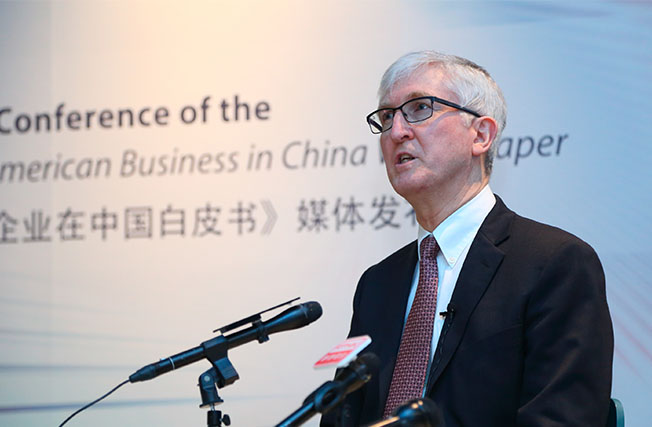 Many members of the American business community in China, myself included, have dedicated not just our careers, but indeed much of our lives working for a healthy, constructive US-China relationship. We’ve lived in China for multiple decades and have enduring, meaningful ties with family, friends and colleagues here, as well as at home in the US. It’s disheartening, then, to observe how strained the current relationship has become. Given our community’s genuine and deep commitment to being part of the solution, these words are offered to the negotiators on both sides: keep your passionate and patriotic commitment to achieving the right result, but let’s tone down the rhetoric and get back to the negotiating table.

Disparaging rhetoric and distortive hyperbole are unfortunately a fact of life when parties adopt public negotiating stances and seek to play to domestic audiences. We are, however, at a point where those tactics impede the strategic objectives for both sides: putting the commercial relationship – and indeed the overall relationship – on a more balanced and sustainable path.

The US-China commercial relationship is still the anchor of the wider relationship between these two great powers. A healthy trading relationship between the US and China is also important to global prosperity and peace. The last few days have given rise to reasons for hope: the mutual affirmation of a personal friendship between President Trump and President Xi, cordial discussion between Secretary Mnuchin and People’s Bank of China Governor Yi, and the mention of possible further negotiation. These are openings both governments should seize upon, staying passionately committed to getting the right result, but taking the opportunity to dampen the emotion while resuming negotiations.

The upcoming June 28-29 G20 meeting in Osaka provides the perfect opportunity for the two presidents to agree to just that – a return to serious and professional negotiations and an immediate de-escalation of the public blame game. Recognizing that our two political systems are very different – and acknowledging that cultural and linguistic barriers genuinely complicate negotiations – can help negotiators get to a result that meets the core requirements of both sides and eliminates the need to blame the other party for the breakdown in the talks.

At this point, assigning blame for the breakdown is much less important than resuming a productive negotiation in a spirit of mutual respect. The substantive issues remain the same, and our community’s position on the need for significant reform measures has remained consistent over the past two decades. We remain committed to those objectives, even as tensions between the two sides escalate.

Ultimately, successful negotiations on a wide range of bilateral issues will be needed to address the fundamental problems in the relationship. We will not resolve all issues in one negotiation, so the two governments will need to show that they are committed to continue to work in a steady and respectful manner. Further public accusations from either side will undermine their ability to achieve this vital objective. We should go in fact in the other direction, adopting a steady and professional diplomacy seeking to restore trust and make communication clearer.

Presidents Trump and Xi, now is the time to agree to resume negotiations: please do not try to back the other side into a corner, and instruct your trade negotiators to hammer out a deal that can last long into the future.

Timothy P. Stratford is the chairman of the American Chamber of Commerce in China.