Moving the Needle on Work Safety 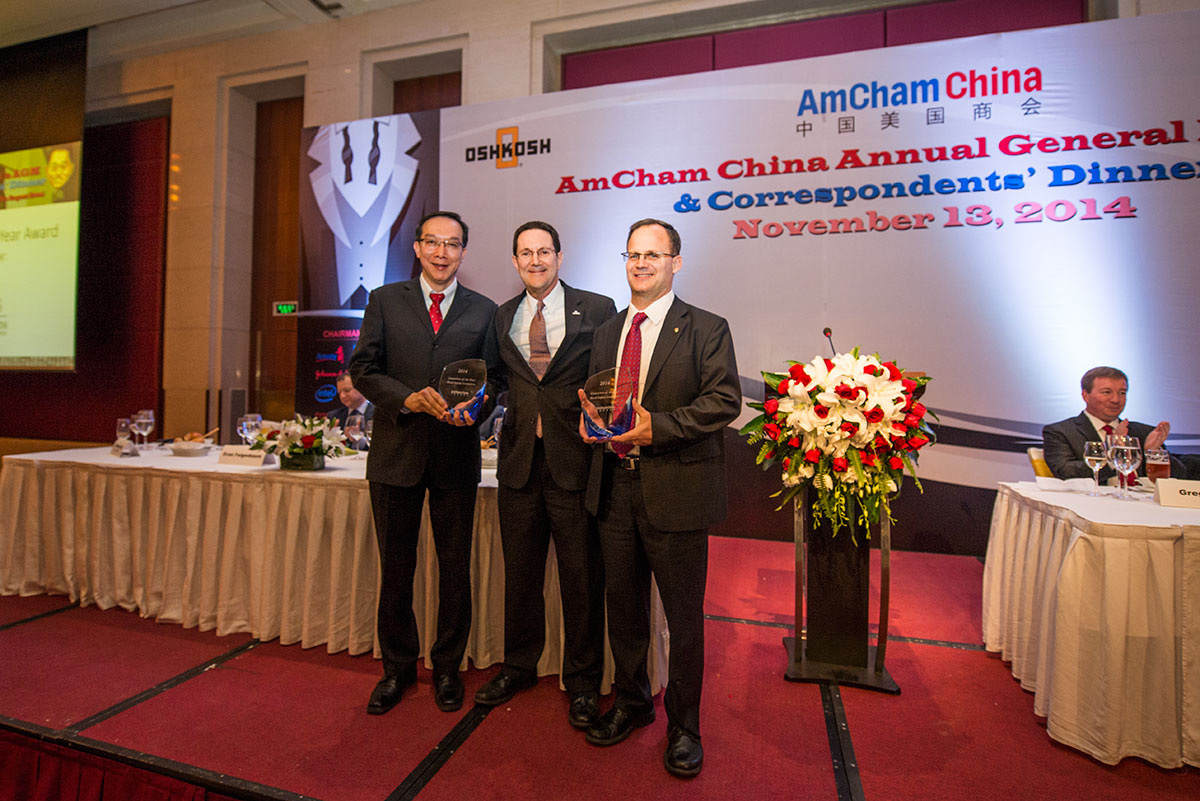 Working on China’s numerous construction sites can be hazardous, but life may be getting a little safer thanks to the efforts of one of AmCham China's working groups. By focusing on a closely defined strategy, AmCham China’s Work Safety Committee has made its voice heard in the formulation of safety regulations, and in the process earned itself recognition as the chamber’s Committee of the Year.

“I am very pleased with the progress the Work Safety Committee has made so far in its short existence,” said Terex China President Ken Lousberg, who accepted the award at the AmCham China Annual General Meeting in November along with Co-chair Desmond Soh, Asia president for Oshkosh. “I feel confident that the global expertise the members of our committee bring to the area of working at height safely will be of great benefit to the government leaders that have been tasked with lowering this risk in China.”

The Work Safety Committee is one of the younger working groups in AmCham China, created in 2011 and led by Terex and Oshkosh, two leaders in the manufacture of equipment to make working at height safer. Their mission was to help the government revise out-of-date regulations, improve the lot of construction workers, and help develop the market for safety equipment.

At stake are the lives of hundreds of thousands of workers building the new China. According to governmental statistics, there were 512 work safety accidents in municipal administered housing projects in 2013, resulting in 665 deaths. The China Academy of Building Research estimates the building and construction industry is second only to the mining industry in terms of accidents.

To address the problem, the Ministry of Housing and Urban-Rural Development (MOHURD) committed to reducing the use of scaffolding by 50 percent during the 12th Five-Year Plan that runs through 2015. The adoption rate of aerial working platforms, a safer alternative to scaffolding, was less than 8 percent in 2012, and the committee hopes that the adoption of new laws will raise it to 60 percent.

As well as saving lives, the adoption and enforcement of regulations that make construction sites safer creates business opportunities. The market for such equipment in the US is around $3 billion a year, compared with around only $200 million a year in China. By revising and updating the law, this market could expand to more than $1 billion.

The committee’s strategy involved engaging officials from MOHURD and the State Administration of Work Safety and demonstrating the benefits of updated regulations for the construction industry and those working in it. As well as the loss of life, construction site accidents reduce productivity, generate the need for compensation, and damage the reputations of the companies involved.

A key plank of the engagement was a “reverse trade mission” of government officials to the US in 2013. Around seven officials from each of the two agencies spent around a week in the US, meeting their counterparts at the US Department of Labor and visiting the production facilities of Oshkosh and Terex group companies. This was made possible through cooperation with the US Commercial Service at the US Embassy in Beijing and the Association of Equipment Manufacturers.

The committee made important progress during 2014 in helping update the “Safety and Technical Standard for Work at Heights in Construction Job Sites,” which was originally enacted in 1991. The new regulations, which will likely be approved in 2015, should not only help make construction sites safer but also allow for the development of the market for safety equipment.

“Through the AmCham China platform, we have been able to contact high-level officials who are responsible for the country’s work safety regulations, pressing our case to update and improve those regulations,” said Giovanni Hou, director of customer support and business development at Oshkosh. “By being able to reach people at the top, it’s easier to influence those who actually execute the policies.”