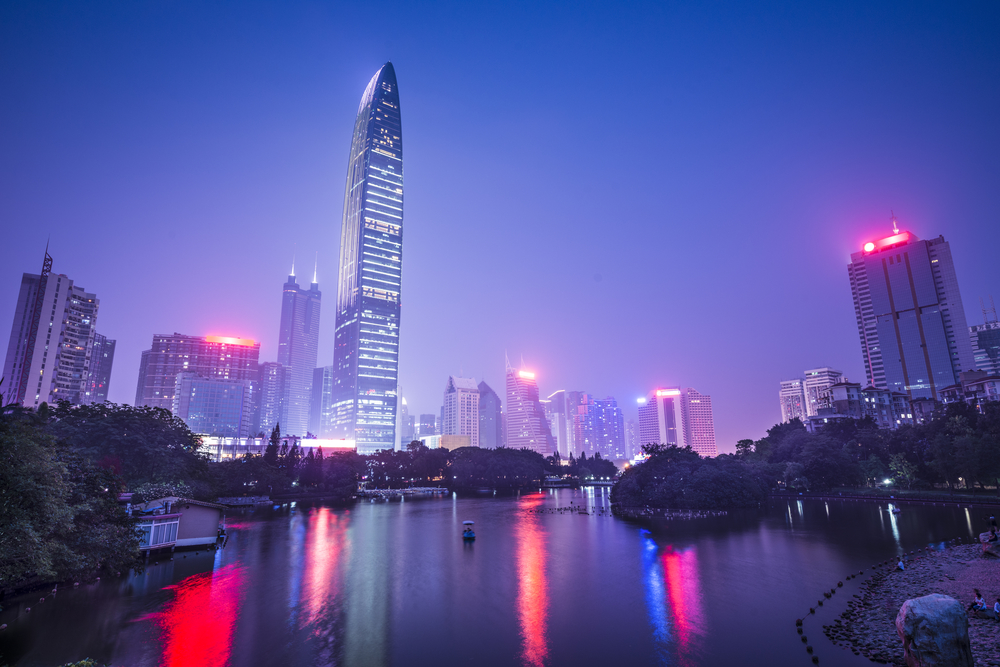 Often dubbed China’s “Silicon Valley”, Shenzhen is China’s fastest-growing city. It is ranked by the Chinese Academy of Social Sciences as the mainland’s top city for “overall economic competitiveness” and is China’s premier Special Economic Zone (SEZ) for foreign investment as well as a sub-provincial class city.

Every year, millions flock to its city center as part-time or migrant workers, entrepreneurs from around the globe seek to benefit from its investment-friendly practices, and tourists admire its futuristic landscape.

Located in Guangdong province only 100 km (62 miles) southeast of its capital, Guangzhou, Shenzhen is strategically located on the Pearl River Delta that serves as a border with Hong Kong. The city center is under 20 minutes from Kowloon by fast train. Other nearby cities include Huizhou, Dongguan, and Macao.

According to the Outline Development Plan for the Guangdong-Hong Kong-Macao Greater Bay Area (GBA), Shenzhen is one of four core cities to serve as the engines for development in the region. Shenzhen is frequently called upon to be the GBA’s technology and R&D hub. As of 2018, four percent of Shenzhen’s GDP was invested into research and over 11,000 high-tech enterprises called the city home.

Shenzhen trails only Shanghai and Beijing in China for overall GDP, ranking third at RMB 2,422 billion ($366.03 billion) per year, its growth having eclipsed Hong Kong in 2018. Shenzhen also has its own stock exchange – the Shenzhen Stock Exchange. It is the eighth largest in the world.

Shenzhen’s SEZ was expanded in 2010 from four districts to the entire city. Businesses within the Shenzhen SEZ enjoy a wide range of tax exemptions, grants/loans, and reduced rates. These notably include:

On March 14, 2019, the government announced a one-year trial period tax break for “high-end talent” coming to the Greater Bay Area.

The notice stated that if the amount of individual income tax (IIT) paid by those talents exceeds 15 percent of their taxable income, the excess part shall be subsidized by the governments of the nine cities in the GBA. The subsidy is exempt from personal income tax and is granted once a year. The policy has been made clear to apply for citizens as well as foreigners with residency.

As mainland China’s leading city for foreign investment and a showcase for China’s “socialism with Chinese characteristics”, Shenzhen is frequently at the forefront for new innovations in the CCP’s governing system.

While the actual steps Shenzhen will take to secure intellectual property (IP) have not been made clear at this time, the language implies a greater shift by the country to comply with IP concerns from foreign enterprises and encourage their continued investment within the city.