So Mooch More: Inside the Trump White House 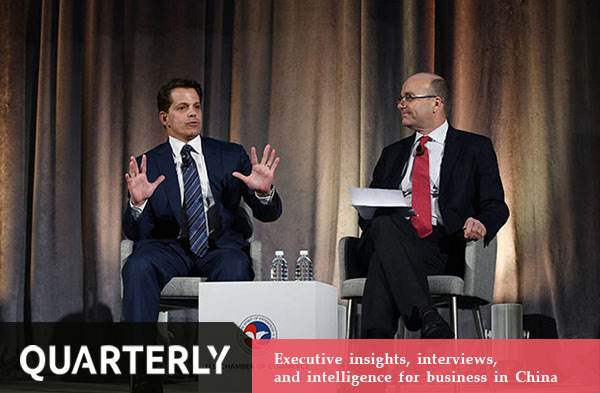 In recent trade talks, the president has dropped the terms calling for a ban of commercial cyber theft to get a swift deal, trying to reach a summer signing target. A lot of people are worried that the president would want to rush to get a deal, any thoughts?

Well, let’s talk about that narrative for a second. The narrative is that the president wants a quick deal so that they can notch a victory on the tape, and then there’ll be some snarky CNN analysts that say the deal is not exactly what he promised the American people, and point to the things that are disadvantageous to the United States.

But I think that, and I’m going to use a George W. Bushism – everybody is “misunderestimating” the president. The reason why he gets underestimated is he’s an unbelievable communicator from the podium, but he doesn’t speak in the complete sentences of a Yale University English professor. However, he gets these things and he understands the intuition behind them, and he’s been talking about these things for 30 years.

I have an enormous amount of respect for China, Chinese culture, and the Chinese government. Don’t take my word for it. Listen to Graham Allison, the Dean of the Kennedy School. When he wrote his book, Destined for War, he said one thing that’s differentiating between the US and China is that we are R&D, and they at times have been RD&T, which is research, development, and theft. And so, this is a very big issue.

The president is a common sense-oriented person, so he recognizes how much theft we would actually be able to stop by simply signing an agreement to stop theft. People are sore with the president for the climate accord deal, but he pulled out of that deal for many different reasons. One of the reasons was that it wasn’t having that big of an effect.

How much of an actual reset do you think that there will be if a signing ceremony between Presidents Trump and Xi takes place at Maralago? How much will that signing ceremony revive the relationship?

You’ve met the president, right? He likes some rhetorical flourishes once in a while. He’s going to get to the podium, and he’s going to say this is the greatest thing that’s ever happened in the history of mankind. He’s going to set the expectations very high.

Now, let me say this to the Americans that are in the room: The stupendous, legendary, and miraculous growth and transformation of China has been phenomenal for the world. The fact that the Chinese have been able to lift their people out of poverty and into a Western-style, consumption-based capitalist experience is an unbelievable thing for the world.

Every time in my life that I have put my pride and my ego into my decision making, it has led to a downfall for me. I got fired from the White House like an Austin Powers film – just shot up into the sky and dropped in the fire. I made a mistake. I made a fireable mistake, and it was born from ego and pride. And it was born from high emotions. It is so important for the United States and China to reduce pride, to reduce ego, to reduce emotion, and think about the context of the global civilization, and think about how we can all live and cohabitate with a very strong bilateral relationship.

You talk about 5G as mission critical for the United States.

When you say 4g and then 5g to the American citizen, they think they are getting a 20% or a 25% move. It’s not. This is a quantum move in the velocity and the flow of communication and the density of deliverables over those channels. And if you’re Chinese in the room, you’re going to be sore at me for saying this. I’m sorry, but some argue that there are things in Huawei where there are backdoors in the system that will allow too much information to flow in a direction where you wouldn’t want it to flow if you spent hundreds of billions of dollars on your drug research or your military research or other aspects of research.

The big advantage that the Chinese have over the US is that they have married their public enterprise, China Inc., to their private enterprises and they’ve created a platform for their businesses to grow off of that platform. “Abide to these rules and we are in harmony with each other.” We don’t do that in the United States.

The United States and China will directly benefit from a much stronger United States. You trust me on this – I have a pretty good understanding of both of our cultures, and we both respect strength. And the stronger we both are, the better our relationship is going to be. And if we don’t get ahead of ourselves and 5G, immediately, that’s going to be a problem for us, and a problem for the world.

You said we need to remember that China is not a hostile power, but that it is an aggressive power.

And so, I don’t see China as our adversary. But I do see China as an aggressive economic competitor on the world stage. Everybody in this room is smart enough to know that there are pockets of people in the Chinese government that may see us as an enemy or an adversary. And there are pockets of people in the US that see it that way too. But reasonable people, people that want to see peace, and want to see prosperity, don’t see it that way. They know that there are mechanisms that we can put in place, diplomatically and economically, that can make this work.

What did the president think of your freedom of press op-ed?

He didn’t love it. Actually, to be honest with you, I don’t think the president read it. He read the headline, because in the op-ed I write that he’s doing a very good job, he’ll likely be reelected. But, he is the leader of the longest standing republican democracy and we do have one big advantage over the Chinese. And, if you’re a Chinese national in this room, you should pay attention to what I’m saying.

The free press, and when you read the federalist papers, and when you understand the original design of the country – the design of the country from the founders was to protect the most important minority in the world. Who is the most important minority in the world? That would be the individual. And what the founders decided was that they would create in the new world an ability for the individual to be protected from its government. The result of which required a free press to hold those in power in check, because we know from Lord Actin that absolute power corrupts absolutely.

The free press is not the enemy of the people. It is a beacon that protects our liberties. What the free press does for society is it creates innovation, because when you teach your second grader to think freely and to speak freely, they will innovate. When you’re telling your second grader that they can’t rail on their government, and they can’t look at certain internet sites, and they are censored into a sort of group think, you are reducing their level and their capability of innovating. Facebook, Apple, all of these things are invented here for a reason, and that’s the ancillary benefit of the free press.

This article was originally published in the second edition of the AmCham China Quarterly, an executive-targeted periodical focused on policy, business, and technology, driven by C-suite perspectives and insights. To subscribe or contribute to the Quarterly, contact our editor: jpapolos@amchamchina.org