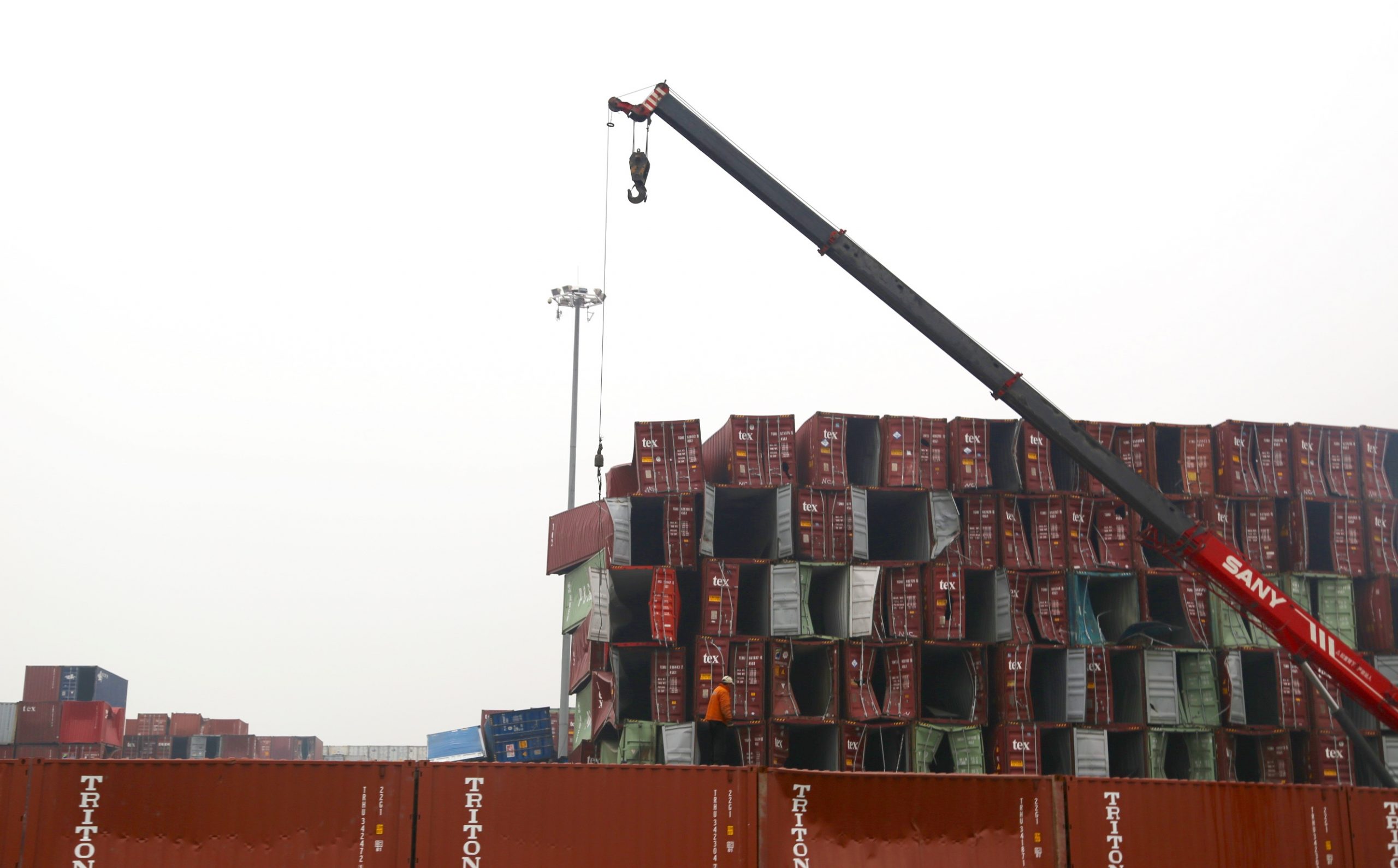 The massive chemical fire of Aug. 12, 2015, shook the Binhai and TEDA communities of Tianjin. The horrific industrial accident impacted many lives: people working the nightshift, children at home in nearby apartments and first responders to the blaze. More than 100 died, almost 800 were injured and tens of thousands were displaced.

The blast also solidified the community, as Binhai citizens came forward to lend a helping hand and companies based in the area provided materials to help police and citizens on the scene and the families of the fire fighters who died trying to stop the flames.

In the wake of the explosion, AmCham China’s Tianjin Chapter reached out to members registered in Binhai, a district of Tianjin municipality, gathering information on injuries and damage and spreading what little information was available. Tianjin Chapter Chairman Martin Winchell of Schneider Logistics met with Sun Jiannan, Vice President of the Tianjin Commission of Commerce, to offer suggestions on how affected companies could move forward.

Most companies rapidly set up crisis management teams and were back in operation in two weeks or less. During those first few weeks, employees organized donations of masks and other helpful items for those at the site or left homeless by the blast. Action at both the individual and corporate level was swift and generous.

While two weeks marked a return to normalcy for most, as operations got back up to speed and global media attention subsided, it was only the start of the financial impact for companies that work with dangerous chemicals. In the aftermath of the accident, the Tianjin government brought chemical transportation to a standstill. After the regulatory failures and breaches of legislation that led to the explosion, an overhaul was clearly needed. But compliant companies found themselves in the dark, with production at a standstill.

Most AmCham China companies registered in TEDA have recovered. But even if the windows have been replaced and the factory floors filled once again with workers, the government's initial response and ongoing issues with the transportation of chemicals mean some wounds have yet to heal. This major accident could also be a stumbling block on Tianjin's path to becoming a mature port city, part of the Jing-Jin-Ji plan.

“A lot of dangerous goods are still not being allowed through the Tianjin port,” Winchell said. “There's no timeframe on when it will go back to normal.”

The night of the explosion and the week that followed was an alarming period for all those in Binhai, whether they were one of the night-shift workers who had to evacuate or a mom at home alone with her son, unsure what to tell him, or a crisis management team with insufficient information, forced to decide whether to reopen a factory.

The blast ­– two actually, a minor one followed by a large boom that measured 2.9 on the Richter scale – crumpled shipping containers at the port and shattered windows in Binhai’s many towering apartment complexes several hundreds of meters away.

The service manager of one AmCham China member company, who chose to remain anonymous, remembers the night vividly. Her husband was away on a business trip, and she was home with her sleeping son. She saw the cloud from her apartment window, 3 kilometers from the blast, and woke her son, feeling an urgency to tell him something had happened.

“For myself, it’s very difficult to recover,” she said. “Some of my friends’ homes were lost.”

Her colleague, upon seeing the damage to his office the next day, realized he would have been severely injured if the accident had happened during the daytime.

Most of the deaths from the accident were firefighters responding to the scene. Those at home in the area also endured devastation, according to member reports: a curious child peering out the window disfigured by shards of glass from the second explosion, the loss of a family dog, even the tragic death of a 6-month-old baby.

In the face of this disaster that touched so many lives in Binhai, the community of about 1 million responded quickly. One Otis Elevator China employee helped an injured neighbor down 15 flights of stairs. Taxi drivers gave free rides. Hotels and restaurants opened up their services to those who lost their homes. Employees of member companies donated masks to police manning the site. United Technologies Corporation, the parent company of Otis, donated RMB 2 million to the impacted fire fighters and their families and to safety education programs to prevent similar losses in disaster situations.

Companies also took this time of uncertainty to demonstrate their commitment to employees. Otis formed a crisis management team of senior leadership immediately after the accident. The first order of business was to attend to five employees who suffered minor injuries and three others who were left homeless. They then hired an independent environmental testing company to test the air, water and overall work environment for two weeks. The same went for any spaces where Otis employees would have to repair damaged elevators. When the tests showed all was clear, the company got back to work filling orders and reproducing shipments that had been lost at the port.

Otis also had to proactively reach out to clients, updating them on the status of their orders. “If a building is delayed, the damage claims can be pretty significant,” said Tony Black, President of Otis Elevator Tianjin. “But for the most part, there hasn’t been any impact on our customers. Communication was key to that.”

Silence in the first week

In the first crucial week after the blast, communication from the Binhai government left many wanting.

“The first five days were horrible, especially mentally,” recalls Fan Chunyan, Public Relations Manager at Novozymes. “We received some phone calls from authorities to ask if we had any injuries, but the information about the explosion was not clear. Every morning we came, without transparent information.” She said this made it hard for her company’s crisis management team to act decisively.

All Binhai-based AmCham China member companies interviewed for this story spoke of similar circumstances. While some companies received some response from the government – Otis got a visit from the Mayor of Tianjin and Novozymes had some support from the TEDA government – they all agreed that the causes of the explosion and the dangers in its aftermath were not clearly communicated.

Gorbel Medical President and CEO Brian Reh said he found no one to turn to for those answers. “And we were asking,” he said. Gorbel’s 70-person industrial crane manufacturing site, established in 2006, is 5 kilometers from the blast site. Gorbel, like Otis, sought independent testing to calm the fears of colleagues. While he wasn’t entirely surprised about the alleged side deals and shortcuts that led to the accident, he said the response after the fact was still disappointing. “We had to go it alone,” he said.

Working in the communications vacuum, Chapter Chairman Winchell said, “We ended up being almost investigative journalists to see what was real. The first week, nobody (we called) picked up their phones.”

Adding to the anxiety in Binhai was the strange smell and white foam seen on Aug. 18. Companies in the area shut down operations for a half day until they could assess that the smell and foam caused by lingering chemicals from the explosion posed no danger to employees.

Another factor posing problems for operations in Tianjin: perceptions from the US and Europe.

Fernando Cutanda is the North China Head of Foreign Companies Sector at International SOS, a medical and travel security risk company serving clients worldwide. When his own crisis team assembled, he said it was “complicated at the beginning because people at headquarters were receiving very different information than the people on the ground in Tianjin.” Ultimately, International SOS advised companies not to evacuate. That message didn’t go over well for all his clients. To fill in the information void, the company organized a global webinar for 200-some companies, “putting things into perspective” in terms of geography (Binhai is about 40 kilometers east of Tianjin’s city center, an hour's drive) and necessary precautions.

Miscommunication also impacted International SOS’s clinic in Binhai. The facility went into overdrive following the blast, providing 300 consultations in four days. While some patients came in with cuts and skin irritations, others had no symptoms but were looking for a battery of tests to calm their fears.

For Novozymes, a key material for production, liquid ammonia, was severely restricted until after the Sept. 3 military parade in Beijing.

Many companies set up shop in Binhai because of the proximity to the port. In the wake of the blast, transportation costs “nearly doubled” at one AmCham China member company's plant when materials had to take a more circuitous path. Warehouse costs went up, too, as storage facilities for hazardous chemicals raised their prices. A representative from the company said finding alternate warehouses that are qualified to hold these chemicals wasn't easy. Every day, the losses were significant.

A drive through TEDA on a hazy November day showed damage from the blast was still visible at a wide radius. Broken windows pockmarked apartments and a few seriously damaged businesses.

Fresh saplings lined the blast site, spindly for the moment. The investment outlook is much the same – fraught by initial uncertainty, yet already moving toward a healthier place.

“Nobody’s said they would stop investment,” said Winchell, adding that the government was currently trying to assess whether it’s the blast or the economy that has led to the recent drops in foreign direct investment. “The answer is probably a little of both.”

Cutanda at International SOS said that since the accident, many of his clients have been scrutinizing new plans and investments. “They’re not saying it’s never going to happen, but it’s a big question mark,” he said.

Black said Otis stood firm in their ongoing investment in Tianjin and TEDA.