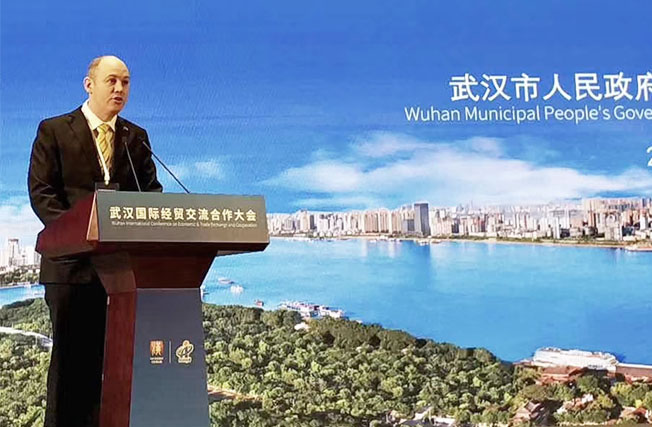 On May 29th, 2019, AmCham China Vice Chair Colm Rafferty was invited to join and speak on behalf of AmCham China at the Wuhan International Conference on Economic & Trade Exchange.

The Conference was held by Wuhan Commerce Bureau, with a theme of deepening exchanges and cooperation for a better future in Wuhan. More than 400 executive guests from 23 countries, including senior executives of enterprises among the Global Fortune 500, as well as other renowned domestic and foreign enterprises, representatives from foreign embassies, consulates, and chambers in China, and delegations from Brazil and Hong Kong showed up to the Wuhan Conference Centre.

The conference was hosted by the Vice Mayor of Wuhan Municipal People’s Government, Xu Honglan. Rafferty introduced AmCham China's history and AmCham Central China Chapter to all attendees. Then, he shared the data published in the 2019 China Business Climate Survey, conducted by AmCham China in February 2019. He pointed out that China remains an important market for our member companies while support from Wuhan Local government is still needed. He also mentioned the release of 2019 Policy Priorities and American Business in China White Paper 2019. Rafferty concluded by noting that he maintains an optimistic attitude towards the US-China bilateral relationship.

Before the Conference, Rafferty also showed up in the VIP meeting on May 28th, in which he met with Vice Mayor Xu Honglan and delivered the 2019 AmCham China White Paper to her on behalf of AmCham China. In between the Conferences, Rafferty was invited to attend exclusive breakfast meeting with Ambassador Branstad, along with members of Executive Committee of Central China Chapter.