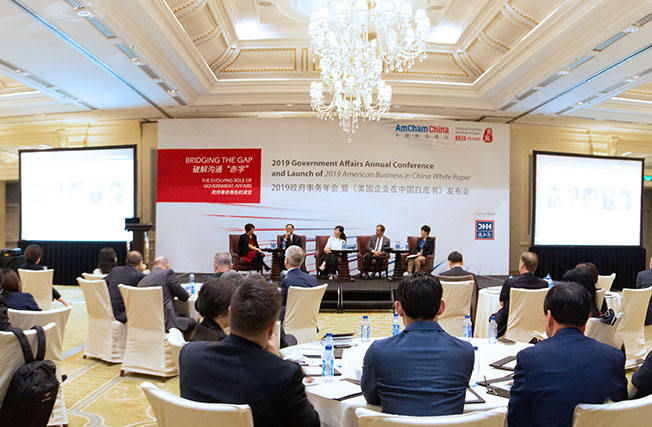 On April 18, AmCham China hosted the fifth annual Government Affairs Conference, which was combined with the official launch of the 2019 American Business in China White Paper. The Chamber was proud to welcome experienced government affairs professionals and senior executives from a variety of industries to share their insights on navigating the complex US-China political environment, as well as introduce this year’s White Paper. The White Paper contains a comprehensive list of specific recommendations provided for both the US and Chinese governments, as well as the Chamber’s Policy Priorities for this year, and served as a great compliment to this year's Government Affairs Conference discussion.

AmCham China Chairman Tim Stratford (pictured above) opened proceedings by reflecting on the current state of US-China bilateral relations. He explained that the basic challenge, in football terms, is that if the Chinese government is developing their economy based on one understanding of the “game,” then they could become very successful. However, it may mean that the US government will make adjustments accordingly, to prevent their “players” from getting hurt. But, he noted, AmCham China has many tools at hand to engage both governments. Between the China Business Climate Survey and numerous flash surveys utilizing member voices, the China Business Conference in Washington DC, and an array of White Paper delivery meetings with various arms of the Chinese government, Stratford emphasized that AmCham China has a large scope of influence to improve the business environment for all parties.

…those in the US government rely on the White Paper to know what has gone both right and wrong for American businesses in China.

He then led the audience through the three overarching recommendations of the White Paper – restoring trust through concrete actions, transparency, predictability, and even-handed enforcement; promoting development through a policy of competitive neutrality; and stimulating innovation through policy – before engaging with attendees and seeking their opinions on issues to be raised during the annual DC Outreach sessions later that month.

The event continued with a panel on the launch of the White Paper, hosted by Randal Phillips, Managing Partner for Asia at Mintz Group and featuring Lester Ross, Partner at WilmerHale; Matthew Murray, Minister Counselor for Economic Affairs at the US Embassy in Beijing; Patrick Wang, Senior Vice President at EF Education First; Duanzhi She, Vice President of Government and Public Affairs, Greater China at Nike Sports; and Wen Wang, Executive Dean at Chongyang Institute for Financial Studies, Renmin University of China.

…the follow through, or implementation, is the biggest area needing improvement…whether it be due to China’s latitude as a developing country or companies’ fear of retribution for complaints, certain commitments have not been met.

Phillips kicked off the panel with a question on what changes have been observed over the last 20 years of the White Paper’s history. Murray remarked that the 2008 White Paper marked that year as a landmark for the US-China business relationship. He further explained that those in the US government rely on the White Paper to know what has gone both right and wrong for American businesses in China. Wang added that this year was the most assertive White Paper he had ever seen. With the bilateral trade dispute drawing so much attention, he said, the White Paper is an important tool for members of the business community to express their views.

The panelists then discussed what successful policies would look like for improving the US-China business relationship. Ross stated that the follow through, or implementation, is the biggest area needing improvement, noting that whether it be due to China’s latitude as a developing country or companies’ fear of retribution for complaints, certain commitments have not been met. Additionally, Wen Wang posed that one “solution” would not be enough without changing America’s viewpoint that its world standing is in decline. The reality, he said, is that China and the US are growing in tandem. The panel wrapped up with a discussion on the Foreign Investment Law, during which panelists agreed that this implementation will likely be different from before, at least with incremental improvements, providing that there are appropriate implementation tools put in place.

The second panel consisted of guest speakers who elaborated on the best approaches for US multinational companies to continue building bridges with Chinese government policy. Moderated by Message Coach CEO Lin Gao, the panel consisted of Max Chen, VP for Government Affairs & Policy at GE (China); Min Qin, VP for Public Affairs at Mars China; Min Yi, Chief Advisor for China at MTR; and Jane Zhang, President at Daohe Consulting, with participants offering advice on how to develop an effective communication mechanism, and identifying tools to quantify the productivity of government affairs-related work.

Common obstacles discussed included an absence of quantifiable results for GA professionals, a hole in the existence of an effective communication framework for external and internal understanding, and inability to bridge the gap between Chinese and US perspectives on the relevance of government affairs. Panelists agreed that China remains high up on the list of countries that are heavily influenced by the central government, and therefore it is necessary for all businesses in China to have a strong understanding of policy, a sustainable relationship with local policymakers, and a clear channel of internal communication for effective implementation of country strategy.

…it is crucial for GA teams to communicate with each bureaucratic level in the chain of command in order to achieve efficient results, while, internally, effectively showing C-level management and other teams how their work is contributing to company operations.

Foreign firms are also more likely to experience these challenges, and the guest panelists provided valuable insight on how to address them. First, it is essential to define the role of government affairs in the business environment. There are certain “Chinese characteristics” in the way that the central government is highly involved with regulating, guiding, and influencing the business environment. Second, it is crucial for GA teams to communicate with each bureaucratic level in the chain of command in order to achieve efficient results, while, internally, effectively showing C-level management and other teams how their work is contributing to company operations. Finally, it is important to define GA work as the amount of losses averted in a potential crisis, or costs evaded in a given negotiation, given that foreign businesses in China often experience costly losses due to a lack of understanding of local business policies.

The panelists also provided in-depth advice on how to help China and the US continue building bridges in business and mutual understanding. Building bridges, they said, is not always about pointing to Chinese-specific characteristics as the explanation to all the obstacles and misunderstandings in China, but is instead about understanding the government agenda and policies that indicate the direction of country development. Perception, communication, and value are key to understanding policy, sustaining positive relationships, and helping stakeholders on both sides of US-China policy successfully build bridges.

AmCham China was honored to host such an impactful and informative event and would like to thank all those who contributed to this year’s White Paper.  For more information and to download the 2019 American Business in China White Paper, click here.