Celebrating Success and Looking to the Future 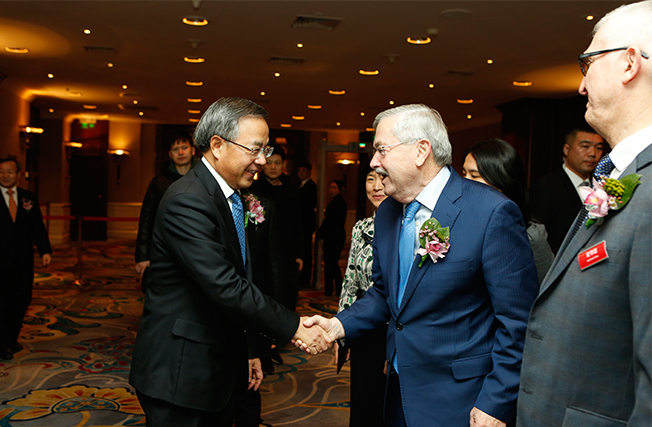 The American Chamber of Commerce in China held its 20th Annual Appreciation Dinner & 100th Anniversary Celebration on December 12, 2019, to celebrate the efforts made by both the US and Chinese governments, as well as the American business community, towards resolving the current trade tensions and forging a stronger bilateral relationship.

Around 550 guests from the US Embassy, Chinese government ministries and organizations, and the wider AmCham China community attended the event, whose theme was “Building Trust, Promoting Common Ground”.

Just days ahead of the latest tariff deadline, senior representatives from all parts of the bilateral relationship came together to talk about where the two sides can mutually prosper, instead of focusing on areas of disagreement. Chinese Vice Premier Hu Chunhua and US Ambassador to China Terry Branstad both attended the dinner and delivered keynote speeches.

In his remarks, AmCham Chairman Tim Stratford (pictured above) recalled China’s entry into the WTO in 2001, during his first stint as Chair, noting that it was “a momentous milestone in China’s journey to align with the world”, and commenting on the strides that China has made in the ensuing two decades.

“My impression today is that China has advanced to a level where it now also seeks for the world to align with China.” China, he continued, is confident regarding its current path and place in the world, and wants to foster a type of globalism that can accommodate its own economic development model, its own ideology, and its efforts to safeguard its own national security.

Gao Yan (pictured above), Chairwoman of the China Council for the Promotion of International Trade (CCPIT), said that AmCham China has been an important partner for her organization and one of the most influential foreign Chambers in China.

“The development and growth of AmCham China and of US businesses in China vividly reflects the development of economic globalization,” she said. “It is also a model of US-China economic and trade relations of mutual benefits.” She added that the CCPIT is willing to work with the US Embassy, AmCham China, and others to strengthen cooperation, build a diversified platform, provide improved services, and organize dialogues and interactions between government and business to create a favorable environment.

US Ambassador to China Terry Branstad (pictured above) began by thanking AmCham China for the work the Chamber does to promote a stronger economic bilateral relationship, saying that “Chinese government engagement with the US business community is now more critical than ever.”

He then emphasized how far China has come in the past 40 years since China decided to reform and open up, and expand international relations, saying, “We have provided much of the foreign investment that has helped fuel China’s economic growth, welcomed millions of Chinese students to our colleges and universities, and together with China we have undertaken environmental and scientific cooperation that has helped make China a cleaner and healthier place. Many of us here in this room have contributed to that growth.”

Decisions that the Chinese government makes on economic policy reverberate around the world, and have a direct impact on businesses, workers, and farmers in America, Ambassador Branstad said. He also commended the work being done by Vice Premier Liu He, Ambassador Lighthizer, and Secretary Mnuchin and their teams in negotiating a deal that aims to resolve the structural issues at the heart of the trade tensions, concluding, “I have great hopes that we will rebalance the relationship for the benefit of all, setting a productive path for the future.”

Hu Chunhua (pictured above) – just the fourth Vice Premier to attend the Appreciation Dinner in its 20-year history – then spoke about the Chamber’s role as an active participant and facilitator of US-China economic and trade relations, fully play its role as a bridge, deepen communication and cooperation between the two business communities, promote mutual understanding between the two governments and peoples, and make important contributions to the relationship.

Through the publication of AmCham China’s White Paper and the Business Climate Report over more than 20 years, US companies have actively made their voices heard by the Chinese government to help address the concerns of foreign enterprises, thus playing an important role in improving China’s business environment,” he said.

“China always believes that, as influential countries, China and the United States can both benefit if they join forces, while confrontation will hurt both sides. China’s huge market potential will continue to grow, and its demand for high-quality goods and services will continue to grow, bringing more business opportunities to foreign companies including American ones. China’s reform and opening up will not be affected by the economic and trade frictions between China and the US, and we will promote high-level opening up and deepen mutual benefit at our own pace.”

Earlier, AmCham China Alan Beebe (pictured above) had opened proceedings by welcoming the distinguished guests, including Vice Premier Hu Chunhua and Ambassador Branstad, and thanking Gao Yan from CCPIT for her personal support as well as that of her organization.

A special commemorative video played tribute to AmCham China’s 100-year heritage in China and the role the Chamber has played in promoting positive US-China economic relations over the past four decades, underscoring the important contributions the US business community has made to the development of the Chinese economy.

AmCham China would like to thank CCPIT for their continuous support and the major sponsors of the event for their generous support: Honeywell, Amway, Intel, ExxonMobil, Johnson & Johnson, FedEx, Nu Skin, Cargill, Universal Parks and Resorts, and BP.